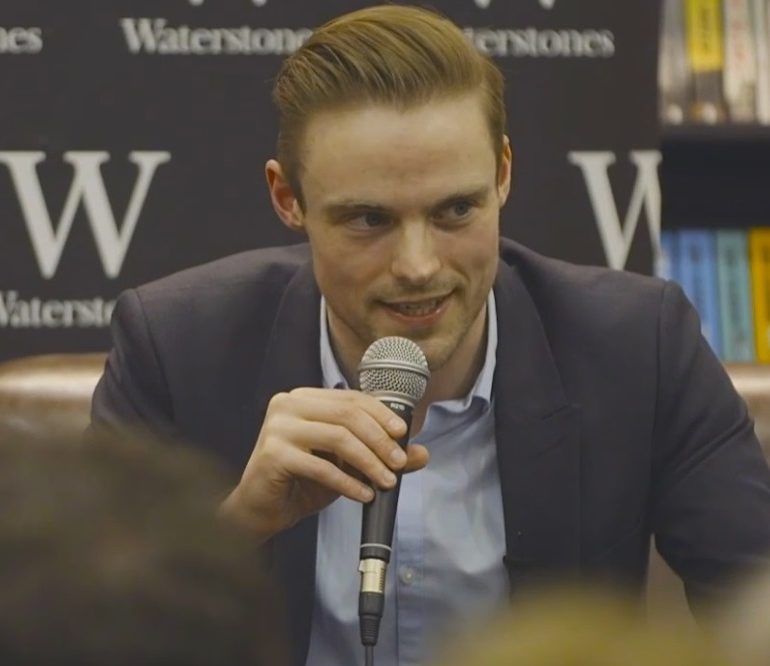 A Conversation With Joseph Knox, Author Of The Smiling Man

Joseph Knox dazzled readers and critics with his debut thriller Sirens, introducing Detective Aidan Waits of the Manchester Police Department. Waits is certainly an interesting character: Damaged, stubborn, yet willing to break the rules to do the right thing.

Knox brings back Aidan in The Smiling Man: Gritty and tense, with dark humor sprinkled in, the book is based on the perplexing, unsolved case of the Somerton Man, who was found dead on an Adelaide beach in the 1940s.

In The Smiling Man, Aidan has resigned himself to the Manchester PD night shift, a dumping ground for cops with no career or no life. He is stuck with partner Detective Inspector Peter Sutcliffe, a pairing made challenging by the fact that the only thing they have in common is mutual contempt.

They patrol a litany of petty crimes under the relentless summer heat, until the monotony is broken one night by a call to investigate a break-in at a massive, empty hotel known as the Palace.

The routine break-in call soon takes a turn when they discover the body of a dead man, sitting upright. The tags have been cut from his clothes, his teeth have been filed down and replaced with crowns, and even his fingerprints have been removed. And he is smiling.

As Aidan races to figure out the identity of the man, he investigates the hotel’s feuding, soon-to-be-divorced owners, delves into the dark, underbelly of the city’s sex trade, and struggles to make sense of the few, baffling clues left behind, including a page of a Persian poetry book that had been sewn into the man’s trousers.

Before long, Aidan becomes a target himself, by somebody wishing to make the case disappear. As the threats escalate, Aidan realizes that the answer he is seeking may lie within a far greater evil in his own past.

Mystery Tribune has a conversation with Joseph Knox last year in anticipation of his first book in the Waits series (see here). What follows is a recent conversation with the author, this time covering The Smiling Man.

Q: What was your inspiration for writing The Smiling Man, and what can you tell us about the true crime that the book is based on?

A: The real case that inspired The Smiling Man is known as Tamam Shud, or the Somerton Man. It refers to a man who traveled to a small town in Australia by untraceable means and was found dead, the victim of a suspected poisoning, in 1948.

To this day, he’s never been identified, and the bewildering circumstances of his death have never been explained. There’s almost too much to go into, but those circumstances include a personalized book, an unbreakable code, and an ominous message sewn into the man’s clothing, Tamam Shud, which translates from Persian as “ended” or “finished.”

Q: How did you go about bringing a case from 1940s Australia to modern-day Manchester? Do you have theories about what really happened to the Somerton Man?

A: What spoke to me about the case was the man’s lack of identity. Without giving too much away, in both the real-life case and the adapted one I used for The Smiling Man, the victim seems to have discarded or intentionally obliterated his own identity. Aidan Waits, my protagonist, is a man who lost his identity at a young age when his mother gave him up for adoption.

As Aidan delves into the case, searching for the smiling man’s real identity, so too does his own real identity come looking for him, until it’s close enough to reach out and tap him on the shoulder.

As to real answers? I think the man was likely a Russian spy, but that this last journey was romantic in nature, trying to make contact with a former lover and exposing himself in the process.

Q: The setting of Manchester plays such a large role in your books. Does the Manchester you write about reflect your experiences there?

A: It does, although of course writing noir basically precludes my focusing on the positives! I was young and in love in Manchester. I always say it’s the first place I ever had my heart broken and the first place I ever had my nose broken. It’s the sucker-punch capital of England, with essentially two cities occupying one space. One extremely poor and one extremely privileged.

The center is also a very walkable, compact space, crammed with bars and clubs, so the nightlife’s just never-ending if you want it to be. In my mind, it’s a terribly romantic place, though, and I always hope some of that shines through at the edges.

Q: What is next for Aidan Waits?

A: I’ve just finished the third in the series, titled The Sleepwalker. It opens with Aidan having sunk yet lower through the ranks of the force, now working protective custody with a terminally ill mass murderer. After a catastrophic, premeditated attack on the hospital, said mass murderer recants his confession, causing Aidan to wonder if the real killer is still out there.

The whole last third of the book is a volcanic eruption of madness, betrayal, and murder, and it’s probably the most intense entry in the series yet.