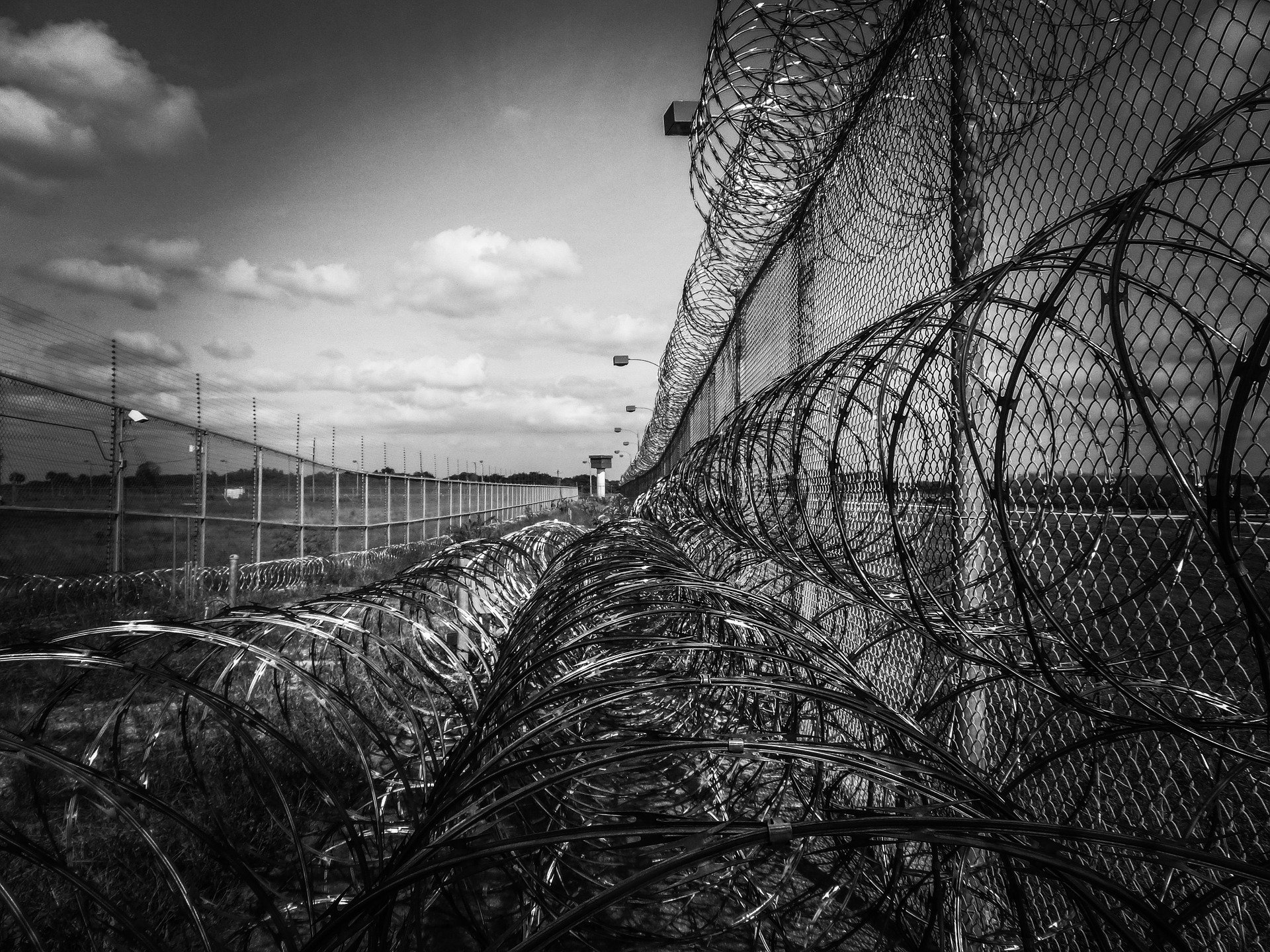 J.B. Stevens lives in the southeastern United States with his wife and daughter. His short fiction and narrative non-fiction has been published by Mystery Tribune, Out of the Gutter, Close To The Bone, Thriller Magazine, Story and Grit, Punk Noir Magazine, The Dead Mule School of Southern Literature, and many others.

Vagner Dos Santos didn’t want to kill the guard. He had no choice. The half-way house was not secure, only one person kept them in. The cheap owners needed to invest in man power. There are bad people in the world. He was not one of them. Vagner knew it wasn’t his fault.

The watchman walked by Vagner’s bunk after midnight. Snores and coughs filled the calm. The place smelled the way a warehouse full of a hundred convicts should smell. The moist funk got in your mouth and permeated your skin.

The guard was on his cell phone swiping right. American’s loved technology. Vagner missed Brazil, it was a simpler place. The people were more consistent.

Vagner needed to get home. He wanted to help his family. He’d only moved to Utah to make money for them. Vagner didn’t like the snow, or the fake religious people, or the weird food, but he managed.

The Mormon Church helped. Vagner tried to stay true to his religion. He never did anything wrong that wasn’t one-hundred-percent necessary. He even wore the prescribed modest undergarments, a challenge for a person raised in the Brazilian sunga speedo. But Vagner was happy to do it. It was joyful to live in the glory of one’s faith.

Vagner grabbed his braided leather belt. His porra father made the strap from the skin of horses they’d killed on their fazenda. Vagner’s dad beat the family with it. Vagner took it the day the abuse ended.

The Mormon Church helped. Vagner tried to stay true to his religion. He never did anything wrong that wasn’t one-hundred-percent necessary.

The fat American’s back was turned. Vagner looped the belt around the neck. Vagner was tall for a Brazilian, the same height as the big gringo. He pulled close. The American smelled like McDonalds.

The man clawed at Vagner’s face. Vagner saw grease under the yellow finger-nails. Vagner tucked his head between the shoulder blades. The struggle was short. The guard was out of shape and didn’t fight hard.

After the movement stopped Vagner held the belt to make sure the job was done. He put it back in his faded jeans and listened. Even snoring, no one woke up.

He drug the flabby body to the linen closet. He muscled it to the back and covered it with sheets.

Vagner went to his locker and put on a clean pink polo shirt. He liked pink, it made him seem gentle. He used the card to go outside. Vagner found the guard’s vehicle, an old White truck. It was large and boxy. American’s loved big cars.

Vagner said a prayer for the dead man. He did not like to hurt people. If he could make it to Mexico then he could get a new identity and fly back to Brazil. He just had to get from Salt Lake City to the border. He didn’t know the way, but he knew to head south.

The sun broke over the snow topped Wasatch Mountains. The high desert pushed in around him. The day was sunny and clear. It was good to be free. He could go home, work, help mom.

If he could make it to Mexico then he could get a new identity and fly back to Brazil. He just had to get from Salt Lake City to the border.

He was a quarter of the way to Las Vegas when the blue lights came. He looked at his speedometer. Vagner was going too fast. Stupid. He had no driver’s license, only the dead guy’s cash.

The officer came up. He looked fresh, clean. He was alone.

Vagner knew his heart should be pounding, but it wasn’t. Vagner smelled Young’s aftershave and looked at the dusty police car and stared at the cop. It was nice to be free. Vagner adjusted his belt.

Vagner leaned to the glove compartment, grabbed the stack of papers, and turned back. Vagner smiled. The prison dentist did good work. His lean dark features and exotic look got strong reactions in Utah.

Young smiled. Vagner knew right then. He put the papers on the center seat next to him. Young wasn’t wearing a wedding ring.

“You look familiar,” Vagner said. “Have I seen you before?”

Young’s blue eyes widened. He brushed blonde hair behind a pale ear and looked at his shoes for a moment.

“Not from around here, do you know Brazil?”

“Small world. I did my mission in Recife.”

“Good stuff. Anyway… your license. I’ll get you on your way fast…  Maybe we can talk later… About Brazil.”

Vagner smiled and winked. Young blushed. Young put his hand on the windowsill. Vagner put his on top. The kid jumped, but relaxed. Both left their hands in place.

Vagner sighed. “Of course.” He shifted to grab the papers. He turned back and threw them in Young’s face.

Young rolled back and settled on his stomach. He moved his left hand to the hip. Vagner recognized the taser.

The electric weapon came up. Vagner stepped right. Young reached his hand to the radio microphone.

Vagner ran over and kicked Young in the face. Young screamed and tried to get up. Vagner kicked him three more times in the head. Young stopped trying to get up.

Vagner looked up and down on the highway. They were alone. Vagner thought about the dash and body cameras, but realized it probably uploaded to the cloud somewhere. It was too late now.

Vagner wrapped the braided horse hide belt around Young’s neck. He pulled. After a minute the breathing stopped. He held it for a beat longer.

Vagner ran over and kicked Young in the face. Young screamed and tried to get up. Vagner kicked him three more times in the head. Young stopped trying to get up.

Why did these people keep making him do this? He hated hurting others… Why couldn’t they just leave him alone?

Vagner grabbed the cop’s key. He moved the police car to the road’s shoulder. He put Young in the front seat. It looked like any officer checking for speeders.

Vagner put the belt back on. The belt was trustworthy, strong. He got back in the pickup and headed south. He figured he could be at the border by morning.

He stopped at a little roadside motel after sundown. It was low slung and painted orange. He paid cash and went to his room. It was full of polyester fabrics and re-production paintings. Everything in the United States was fake.

He went to sleep thinking about the beach in Rio, acai, his mom’s rice and beans.

Vagner woke with a start. He didn’t know why, but he was blind and his ears rang.

Many hands touched him. They started hitting. He felt the shock of the Taser. Soon all he felt was pain.

“Kill a fucking cop you piece of shit?”

Something hit his head, hard, and he went away.

Vagner woke up in a small damp place. It was grey and paint chips floated from the ceiling and it smelled like cleaning products. He heard coughing and an air-conditioner humming.

A big, pale, blonde man sat across from him. He was flushed and sweaty with bloodshot eyes.

Nephi looked up. Vagner followed. The braided leather belt was tied around a pipe. It hung, a loop at the end.

Vagner knew he should feel afraid, but he didn’t. He tried to move his arms but they were bound. He looked down.

Nephi punched him in the face. Stars flashed and Vagner got dizzy. Nephi picked him up, looped the belt around Vanger’s neck, and lowered the weight.

Nephi punched him in the testicles.

The world faded. Vagner fought against the restraints, but they didn’t give.

Vagner felt horse hide on his neck. The darkness washed over him.