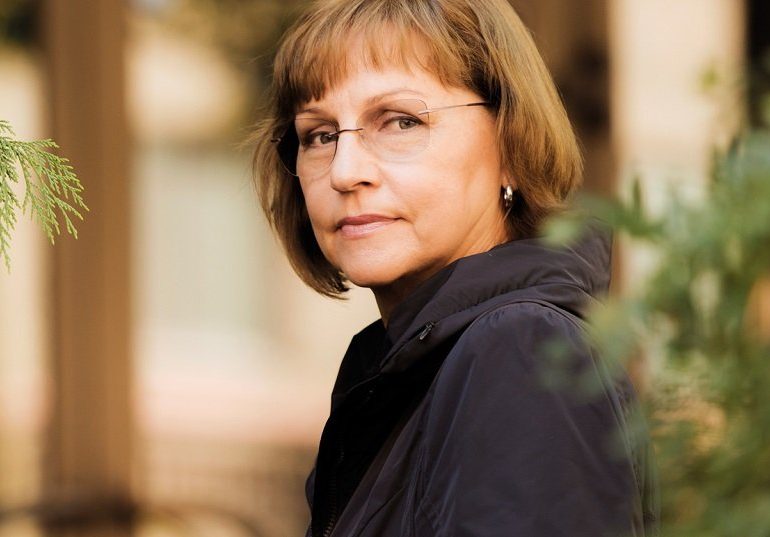 When it comes to Scandinavian crime fiction, one of the names which is increasingly on the rise is Helene Tursten. Before becoming an author, Tursten worked as a nurse and then a dentist, but was forced to leave due to illness. During her illness she worked as a translator of medical articles and then turned into crime writing.

She is well-known in the crime fiction circles for her Detective Inspector Huss series: Irene Huss is a former Ju-Jitsu champion, a mother of twin teenage girls, the wife of a successful chef, and a Detective Inspector with the Violent Crimes Unit in Goteborg, Sweden. (Note: Tursten herself is a native of Göteborg, where she now lives with her husband and daughter).

Tursten has written 11 books so far in the Huss series out of which 9 are translated into English by Soho Press. The latest installment of the series in English (book #9) was just released this month and is titled Who Watcheth

In this new story, Huss is on the trail of a serial killer who wraps his victims up in a package, a forensic countermeasure that the media uses to name the unknown suspect The Package Killer.

The killer watches the women from the shadows. He has an understanding with them; as long as they follow his rules, they are safe. But when they sin, he sentences them to death.

A woman is found dead in a cemetery, strangled and covered in plastic. Just a few days before her death, the victim had received a flower, an unintelligible note, and a photograph of herself. Detective Inspector Irene Huss and her colleagues on the Violent Crimes Unit in Göteborg, Sweden, have neither clue nor motive to pursue, and when similar murders follow, their search for the killer becomes increasingly desperate.

Meanwhile, strange things have been going on at home for Irene: first the rose bush in her garden is mangled, then she receives a threatening package with no return address. Is Irene being paranoid, or is she next on the killer’s list?

As a series, we consider Tursten’s novels as on a par with the late Ed McBain’s 87th Precinct series…refreshing reads!

Although Helene Tursten’s books share some elements of Scandinavian crime fictions of her peer authors, they have certain cinematic feel to them which makes them somehow similar to TV shows such as CSI. One byproduct of this style of storytelling is that they move faster and they are more entertaining.

Some of the books from Huss series which we have read and liked in the past, however, are the following ones: