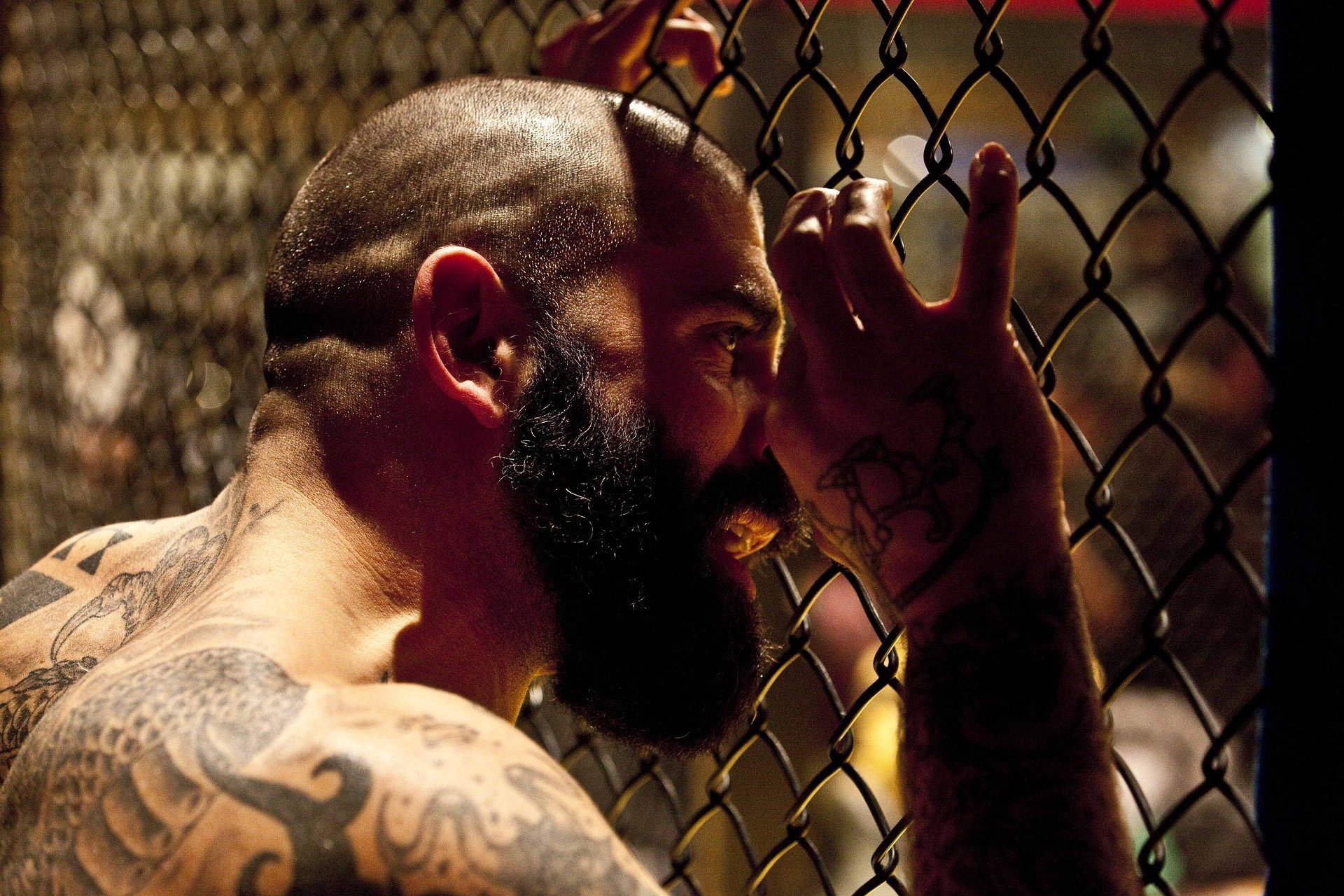 In Besos by Hector Acosta, two luchadores straddle the line between real and fake.

Fabi el Fantastico beat La Sombra Blanca with a kiss, and the crowd hated him for it.

Cries of maricon littered ringside, landing next to crumpled wads of paper and empty cups. Grabbing his pink feathered boa, Fabi climbed the turnbuckle and soaked it all in. Lips painted rojo vivo turned up in a smile even as the crowd pelted him with what he told himself was warm beer, the arena voicing their unhappiness at seeing some exotico beat their idolo in the ring.

Their boos grew as Gloria Gaynor’s defiant voice escaped out of the speakers, Fabi swaying to the tune. A big reason the gimmick worked as well as it did was because of his willingness to go the extra mile.

Their boos grew as Gloria Gaynor’s defiant voice escaped out of the speakers, Fabi swaying to the tune.

It’s why he came out to this song, feathered boa suggestively dangling from the front of his wrestling trunks, and the reason his finishing move revolved around locking lips with his opponent, which per wrestling logic, confused them to the point he could roll them up for an easy three count.

Voice cracking, Fabi sang about surviving and blew more besos, his sweat mixing with the heavy mascara running down his face. He was preparing to step down when the beer bottle sailed out of the crowd and struck him on the forehead.

Shifting the cold pack pressed against his head, Fabian looked up. “Hola, Miguel,” he said.

“I’m going to kill you,” La Sombra repeated.  Walking up to Fabian he said, “You’re taking this little joto act of yours too far.”

“The match was fine,” Fabian said.

“The match was fine,” Miguel parroted, turning to the rest of the boys in the locker room, most in varied state of undress. “You guys believe this viejo?” When no one answered, Miguel turned back to Fabian. “I want to know what you’re going to do about my tights getting stained with beer.”

“You mean from the bottle that someone threw at me?”

Miguel shook his head. “I should have never agreed to this.” He started to walk away only to turn back around and add, “And I should have won.”

“I’m going to kill you,” La Sombra repeated.  Walking up to Fabian he said, “You’re taking this little joto act of yours too far.”

El mismo rechino de siempre. The same complaint as always. “I already told you, the moment you beat me, that’ s it. Se acaba esto. Pero,” Fabian lifted a finger, “If I keep finding ways to cheat, the audience will keep coming back, to see you finally beat me.  Recuerda, ‘Enojados hoy, pagan mañana.’”

“I don’t need your lessons.”

Setting the melting ice pack down, Fabian stood. “¿De qué te quejas, Miguel? You rather people are out taking piss breaks during your matches instead of cheering you on? Or,” he leaned forward, “you worry about liking my besitos too much?”

Knowing it was coming, Miguel’s fist breezed past Fabian. Stepping to the left, he shot out his right foot, making contact with Miguel’s knee.  Not enough for any long-lasting damage but enough to cause Miguel to stumble forward.

Right into Fabian’s waiting arms. He played up the embrace, pressing their bodies together. “Ay, papí,” Fabian said, “save it for the ring.”

The boys burst into laughter as Miguel’s pale complexion grew red. He stood in front of Fabian out of breath, small tremors of rage moving through his body. “I’m telling Jorge I’m done with this.”

Fabian watched Miguel stomp off in search of the wrestling promoter and sat back down on his chair. He wasn’t worried about Miguel’s fit.

Jorge loved Fabi el Fantastico. Loved how the gate for the shows had been increasing ever since he’d debuted. Who would have guessed the largely male audience would take issue with a flamboyant and sexually questionable luchador and pay money to see him lose? Already Fabian was planning to broach the subject of a pay raise.

Call it hazard pay for the bottles he was going to have to start keeping an eye out for.

Jorge loved Fabi el Fantastico. Loved how the gate for the shows had been increasing ever since he’d debuted.

Fabian waited until the rest of the wrestlers cleared out before peeling out of his tights. The muscles in his legs and arms complained with every movement, and there was a tingling at the base of his spine which he tried hard not to think about. Once out of his clothes, Fabian headed to the single shower stall by the back of the locker room, his chanclas slapping against the linoleum floor.

Knowing better than to wait for hot water which would never come, Fabian stepped under the shower faucet, the trickle of cold water nipping at his skin. Turning around to let the water touch his aching back, he found Miguel standing only a few feet away.

“What are you doing here?” Fabian asked.

Miguel limped forward. “You didn’t think we were done, did you?”

“You shouldn’t be here.” Fabian said, glancing to the locker room door.

“You’ll ruin everything,” Fabian whispered, his words coming slow and heavy as Miguel stepped into the shower stall.

Leaning into Miguel’s touch, Fabian lied. “No. You?”

Miguel flexed. “I thought you said you weren’t going to hit me hard.”

Miguel nodded. “You should have seen me in Jorge’s office, telling him I wouldn’t wrestle with you anymore, no matter how much money he offered me.”

“Double. And a promise to get the belt down the road.”

The plan had worked. “Make sure you brag to some of the guys about your little raise tomorrow, that way I can use it against Jorge when I talk to him. I bet you he triples my pay.”

“Oyes, there’s nothing pequeño about my raise,” Miguel said.

Fabian smiled and leaned forward, brushing his lips against Miguel’s. He tasted of beer, bacon wrapped hotdogs and confidence.

This time, La Sombra Blanca didn’t go down with one kiss.

If you’ve enjoyed Besos by Hector Acosta, you can check out our free digital archive of crime, thriller, and horror flash fiction here. Additionally, premium short fiction published by Mystery Tribune on a quarterly basis is available digitally here.