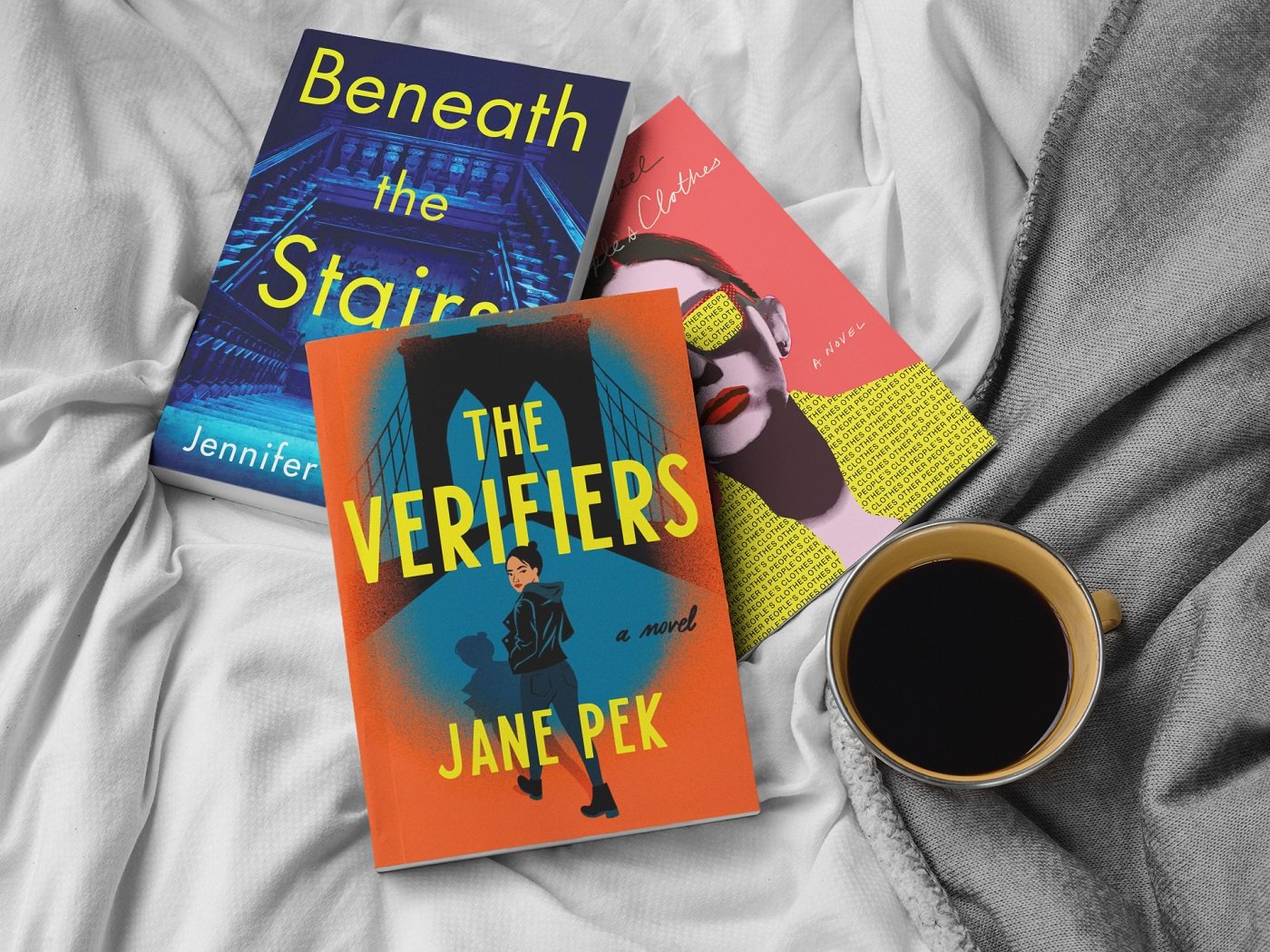 Our picks for best debut crime and thriller novels of February 2022 includes exciting new releases including Beneath the Stairs: A Novel by Jennifer Fawcett.

For the best crime, mystery and thriller books of February, please visit here.

Beneath the Stairs: A Novel by Jennifer Fawcett

Few in sleepy Sumner’s Mills have stumbled across the Octagon House hidden deep in the woods. Even fewer are brave enough to trespass. A man had killed his wife and two young daughters there, a shocking, gruesome crime that the sleepy upstate New York town tried to bury. One summer night, an emboldened fourteen-year-old Clare and her best friend, Abby, ventured into the Octagon House. Clare came out, but a piece of Abby never did.

Twenty years later, an adult Clare receives word that Abby has attempted suicide at the Octagon House and now lies in a coma. With little to lose and still grieving after a personal tragedy, Clare returns to her roots to uncover the darkness responsible for Abby’s accident.

An eerie page-turner, Beneath the Stairs is about the trauma that follows us from childhood to adulthood and returning to the beginning to reach the end.

Other People’s Clothes by Calla Henkel

Hoping to escape the pain of the recent murder of her best friend, art student Zoe Beech finds herself studying abroad in the bohemian capital of Europe—Berlin. Rudderless, Zoe relies on the arrangements of fellow exchange student Hailey Mader, who idolizes Warhol and Britney Spears and wants nothing more than to be an art star.

When Hailey stumbles on a posting for a high-ceilinged, prewar sublet by well-known thriller writer Beatrice Becks, the girls snap it up. They soon spend their nights twisting through Berlin’s club scene and their days hungover. But are they being watched? Convinced that Beatrice intends to use their lives as inspiration for her next novel, Hailey vows to craft main-character-worthy personas. They begin hosting a decadent weekly nightclub in the apartment, finally gaining the notoriety they’ve been craving. Everyone wants an invitation to “Beatrice’s.” As the year unravels and events spiral out of control, they begin to wonder whose story they are living—and how it will end.

Other People’s Clothes brilliantly illuminates the sometimes dangerous intensity of female friendships, as well as offering an unforgettable window into millennial life and the lengths people will go to in order to eradicate emotional pain.

The Verifiers by Jane Pek

Claudia is used to disregarding her fractious family’s model-minority expectations: she has no interest in finding either a conventional career or a nice Chinese boy. She’s also used to keeping secrets from them, such as that she prefers girls—and that she’s just been stealth-recruited by Veracity, a referrals-only online-dating detective agency.

A lifelong mystery reader who wrote her senior thesis on Jane Austen, Claudia believes she’s landed her ideal job. But when a client vanishes, Claudia breaks protocol to investigate—and uncovers a maelstrom of personal and corporate deceit. Part literary mystery, part family story, The Verifiers is a clever and incisive examination of how technology shapes our choices, and the nature of romantic love in the digital age.

Set in 1970-90s Texas, a mesmerizing story about a fierce woman and the partner-in-crime she can’t escape, perfect for readers of Where the Crawdads Sing and Valentine.

It was 1970 when thirteen-year-old runaway Kit Walker was abducted by Manny Romero, a smooth-talking, low-level criminal, who first coddled her and then groomed her into his partner-in-crime. Before long, Kit and Manny were infamous for their string of gas station robberies throughout Texas, making a name for themselves as the Texaco Twosome.

Twenty years after they meet, Kit has scraped together a life for herself and her daughter amongst the pecan trees and muddy creeks of the town of Pecan Hollow, far from Manny. But when he shows up at her doorstep a new man, fresh out of prison, Kit is forced to reckon with the shadows of her past, and her community is sent into a tailspin.

This gritty, penetrating, and unexpectedly tender novel ensnares the reader in its story of resilience and bonds that define us. With its rich rural landscape, indelible characters, and striking regional language, Shadows of Pecan Hollow is a hauntingly intimate and distinctly original debut about the complexity of love—both romantic and familial—and the strength and vulnerability of womanhood.

The Violin Conspiracy by Brendan Slocumb

Growing up Black in rural North Carolina, Ray McMillian’s life is already mapped out. If he’s lucky, he’ll get a job at the hospital cafeteria. If he’s extra lucky, he’ll earn more than minimum wage. But Ray has a gift and a dream—he’s determined to become a world-class professional violinist, and nothing will stand in his way. Not his mother, who wants him to stop making such a racket; not the fact that he can’t afford a violin suitable to his talents; not even the racism inherent in the world of classical music.

When he discovers that his great-great-grandfather’s beat-up old fiddle is actually a priceless Stradivarius, all his dreams suddenly seem within reach. Together, Ray and his violin take the world by storm. But on the eve of the renowned and cutthroat Tchaikovsky Competition—the Olympics of classical music—the violin is stolen, a ransom note for five million dollars left in its place. Ray will have to piece together the clues to recover his treasured Strad … before it’s too late.

With the descendants of the man who once enslaved Ray’s great-great-grandfather asserting that the instrument is rightfully theirs, and with his family staking their own claim, Ray doesn’t know who he can trust—or whether he will ever see his beloved violin again.

When twenty-three-year-old Meggie meets her distant and enigmatic new coworker Sabine, she recognizes in her the person she would like to be. Meggie is immediately drawn to worldly, beautiful, and uninhibited Sabine; and when Sabine announces she’s switching to the nightshift, Meggie impulsively decides to follow her. Giving up her daytime existence, her reliable boyfriend, and the trappings of a normal life, Meggie finds a liberating sense of freedom as she indulges her growing preoccupation with Sabine and plunges into another existence, immersing herself in the transient and uncertain world of the nightshift worker.

While the city sleeps, she passes the hours at work clipping crime stories from the next day’s newspapers. The liminal hours between night and day are spent haunting deserted bars and nightclubs with her eclectic coworkers and going on increasingly wild adventures with Sabine. Yet the closer she gets to Sabine, the more Sabine seems to push her away, leaving Meggie desperately trying to hold on to their intense friendship while doubting if she truly knows her friend at all.

A fresh twist on the coming of age story and a dark love letter to city life, Nightshift explores the thin line between self-invention and self-destruction, as Meggie’s sleep deprivation, drinking, and fixation with Sabine gain a momentum all their own. Vividly set in late-nineties London and framed by Meggie’s present-day reflections, Nightshift is a captivating and moving debut that asks profound questions about who we are and if we can truly escape ourselves.