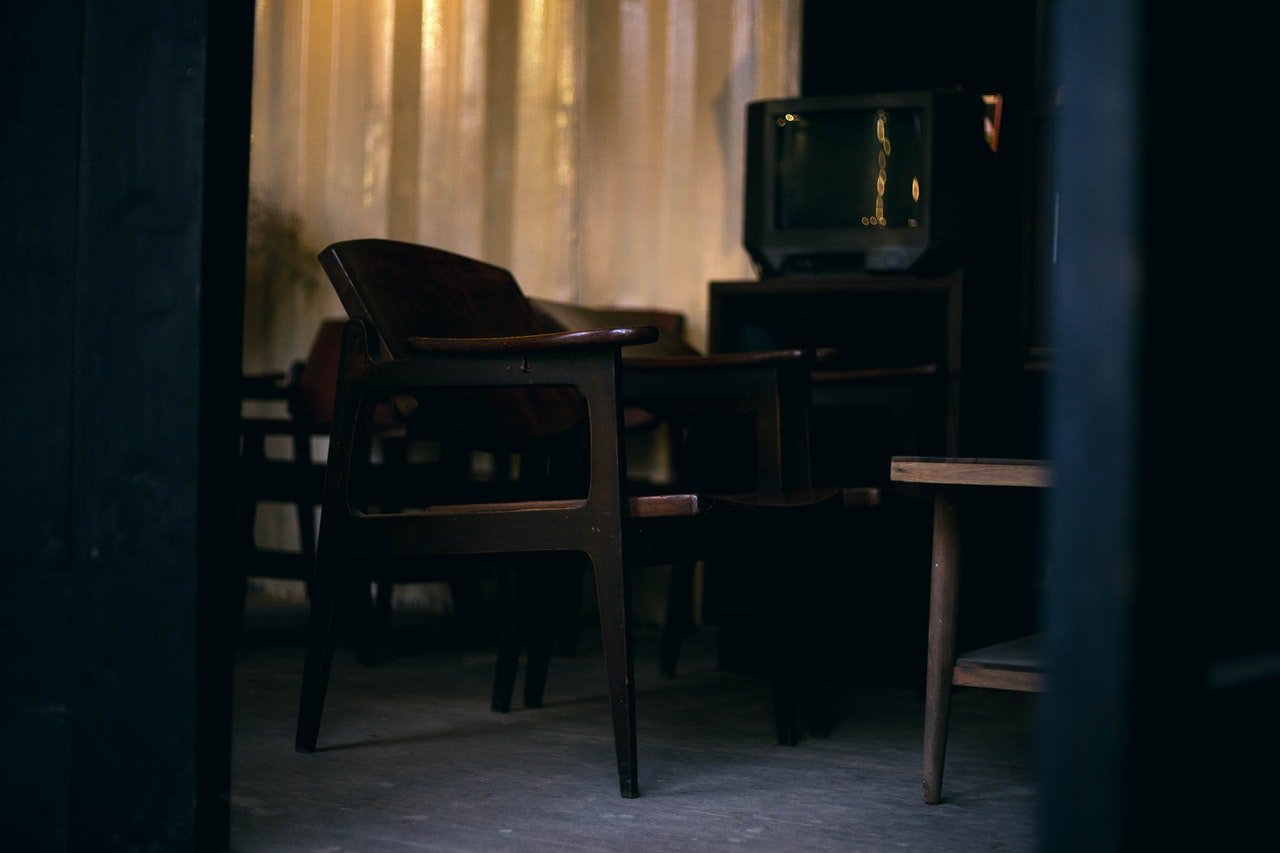 Buck Weiss, author of Bigfoot Country, is a writer and American Literature professor who lives in Chattanooga, TN. His short stories have appeared in the anthologies, Violent Vixens: An Homage to Grindhouse Horror (Dark Peninsula Press), and Carnacki: The New Adventures among others. He is also the author of the graphic novel, Son Chasers: Hitler’s America (Pilot Studios).

Scott found his Uncle Brady sitting on the back steps of the family farmhouse.  The man was staring out at gathering clouds that hung over the empty fields like a dark omen. U.B., as he always told Scott to call him, was dressed in camouflage overalls and a bright orange hunting vest-the traditional garb of most men in Scott’s family.

“I’ve never met a critter I wouldn’t eat, but my favorite is of the feline variety” was one of U.B.’s constant sayings.

Scott had never seen him eat a cat, but if U.B. said he loved it, the boy couldn’t wait to try it someday.

The Mossberg Scott saw in his uncle’s hands was commonplace as well, but how the man held the gun, with the stock resting on the first concrete step and the gray barrel stopping just under his grizzly red beard, was nothing like the lessons on handling the weapon he had given Scott last summer.

U.B. didn’t turn when Scott opened the screen door. “You best have a beer in your hand,” he said.

Scott turned tail and headed back into the kitchen. The cooler by the fridge held tall, barrel brown bottles twenty-four hours a day. Scott smiled as he pulled one out. His thoughts went to the times when U.B. had let him have a sip from his bottle.

Scott turned tail and headed back into the kitchen. The cooler by the fridge held tall, barrel brown bottles twenty-four hours a day.

His dad’s rule was that he couldn’t have his own until he was sixteen. That was six long years down the road. Sneaking drinks from Uncle Brady and the other men that hung around the old farm was the closest thing he could get, and he never missed an opportunity.

U.B. had pulled the gun out from under his chin and was hugging the barrel like Scott’s baby sister held her stuffed lovey.

His uncle stopped what he was going to say when he saw Scott’s hand, and the boy knew he had missed something. There was going to be adult talk, but his presence had corked the flow.

“Sorry, kid,” U.B said as he wiped a light haired arm across his eyes. “Of course, you’re not your pa.”

When he reached for the beer, Scott could see drops of tears drying on the man’s bare arm. His uncle looked haggard, A word Scott had picked up from some paperback western pulled from the county library spin rack and held onto like a silver dollar, precious enough to not throw around, but cheap enough to use when it would make an impression. He was about to toss the word out when his uncle turned and looked him in the eyes. The white stare struck him dumb.

“Have a seat, kid.” U.B. twisted the cap from the bottle and, with the flick of his wrist, sent it sailing into the yard.

They sat there for few minutes, both staring through the barren fields on the west end of the farm.  He could just see Uncle Brady and Aunt Jamie’s house in the distance. Grey rain was falling there and moving slowly east.

U.B. had seen it again. The thought slid into Scott’s mind as his eyes took in the swaying trees in his uncle’s distant yard. U.B. had told Scott the story of seeing the monster a thousand times. He and Aunt Jamie parked on an old oil lane down near the woods everyone called the bottoms. U.B. had got out to “take a piss.”

“There are things in life you just can’t unsee,” U.B. said to the empty field.

When his uncle would tell the story, he would build tension, lowering his voice as he described first hearing the rustle of limbs and something moving through the trees. Then, he would bring his voice up to almost a shout as he told of the hairy ape-like monster stepping out of the dark woods to his left and moving quickly toward him. Sometimes he would still be peeing and others he would be packing up, but he would always smile as he told the gathered, “I barely had time to get my pecker back in my pants.”

Scott’s father would always assure him that there was nothing out there, but Scott knew. U.B. swore that they lived in Bigfoot Country. If his uncle said it was true, “You can bet your freckled ass” that it was.

“I can never go back there,” his uncle said. Scott understood. He never wanted to set foot in those woods again. He could rationalize away the one sighting, but now it was all too real.

“It’s a monster.” His uncle shuddered, and Scott tried not to notice that he was crying again. “You try to control the universe, to understand the world around you.”

U.B. wiped his arm across his eyes again and handed the beer to Scott. “I wasn’t going to do anything earlier. You know that right?”

Scott sipped the beer. The cold liquid was so bitter. He didn’t understand why they liked it. He drank it anyway. U.B. loved beer. Therefore, beer was good.

“I just needed to feel like something was in my grasp.”

Scott handed the beer back and shook his head in desperate affirmation. He was starting to feel like he was in those woods and something was watching him from the thick growth, just out of sight.

“The beast with two backs, Scotty. That’s the one that fucks you up!”

Scott had never heard that name for the monster. After U.B.’s story, he had read every book the county library had on Bigfoot. Yeti, Skunk Ape, and Sasquatch were popular. Scott’s favorite had been the Albatwitche, mostly because the drawing next to it was a tall, gangly female monster with long hair and very naked breasts. Scott found the picture both enticing and horrifying.

His uncle hugged his shotgun close. “I didn’t want to shoot.”

Scott remembered the horror in his uncle’s voice as he had told the story of running to the car. He slammed the door just as the Bigfoot clawed at the back fender. Aunt Jamie screamed as the monster slammed its huge paws on the roof. U.B. “put the pedal to the metal” and they had sped away, leaving the creature in their dust.

“She was screaming.” His uncle said.  U.B. was sobbing now. Scott’s eyes darted back and forth in his rising dread. Was the monster dead? Was it out there?

He had never seen his uncle like this. A small voice in his mind telling him to find his dad, but he wanted to hear more about the beast.

“He was walking toward me,” Uncle Brady threw the empty bottle out into the yard and watched it take a few bounces before resting on its side. He lifted the shotgun to his shoulder and mimicked shooting. “I just pulled.”

Scott felt a mingled rush of joy and sadness move through him. His uncle had done what no man had ever done before.

Distant sirens broke the quiet air of the country day.

U.B. pulled the gun from his shoulder and placed the barrel back under his chin.

Scott watched as his uncle’s eyes moved back to the west. The rain was halfway across the field, and the trees in the yard of the other house were waving like giant hands sticking out of water.

The boy’s heart was revving like a motorbike engine. “Shouldn’t you be there?” he said.

U.B. gave a little forced laugh, more disgust than glee. “Dreams die, Scotty.” The voice was a glass shard whisper. “We fool ourselves believing that there are amazing things in this world, but we’re all just fucked-up monsters.”

“But, you killed the monster,” Scott thought, but something kept him from saying it.

The wind whipped across the old farmhouse yard. Scott shivered.

“A child should have more mystery in life. A longer time of innocence.”

Scott felt hot tears in his eyes. This was just the moment of exhilaration that he dreamed it would be.

His uncle turned toward him and forced a smile. Then, he touched Scott’s face with his trigger finger and brushed the tears away.

Rain began to fall. Big drops that slowly crashed one by one on the boy’s head and shoulders.

“Go on now,” U.B. said, he forced a feeble smile, his chin back resting on the gun barrel, his finger sliding slowly up and down the trigger. “Go out front and tell them where to find me.”

Scotty stood and stepped back through the screen door. He paused for a moment. He could hear his uncle whispering as the rain began to fall harder. He could have sworn that he heard his father’s name.

The boy felt the tears again and quickly pushed them away. U.B. was going to be famous. Scotty smiled as he headed for the front door and the flashing lights moving up the drive.