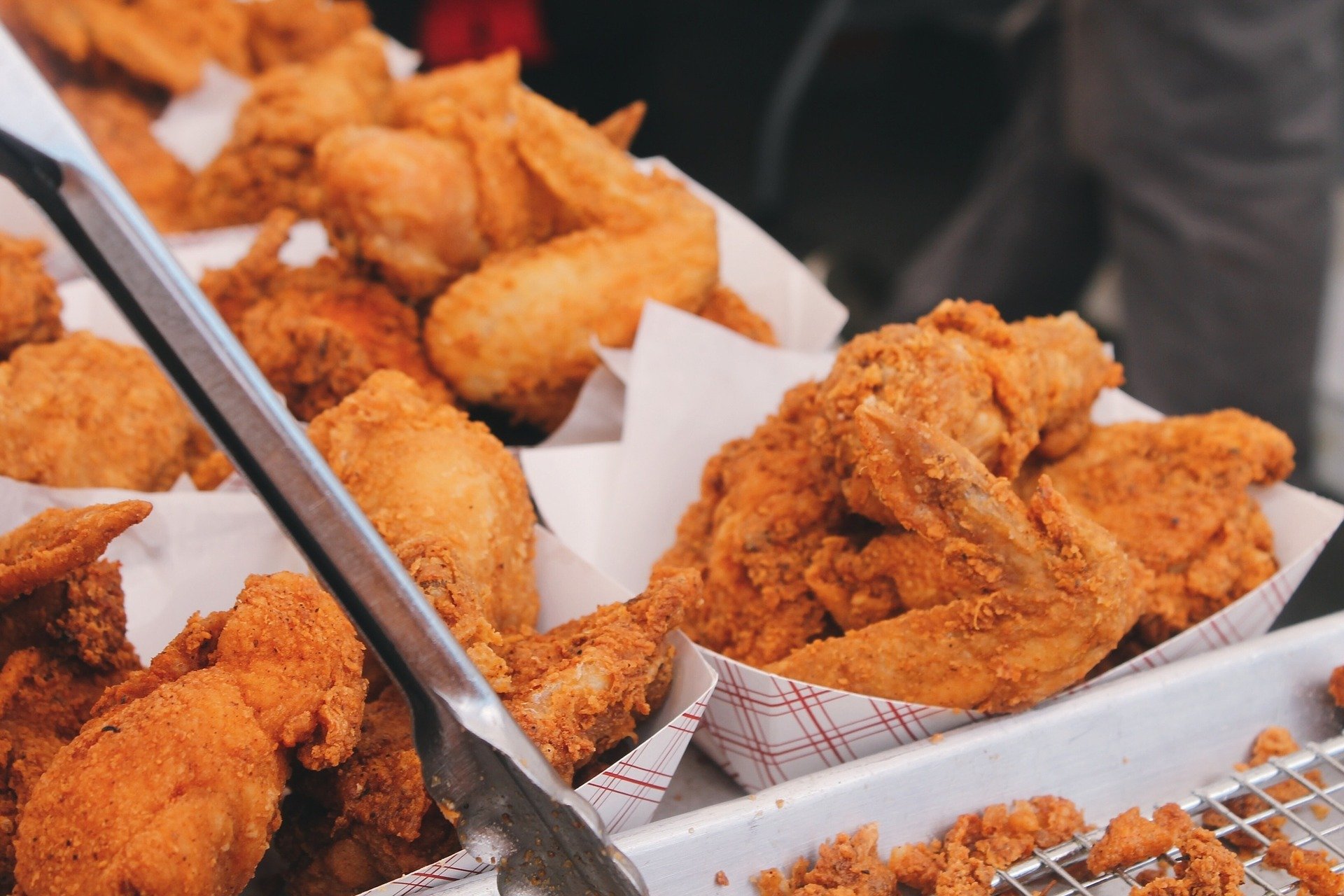 Short fiction by Alex Z. Salinas, author of Chicken Run, has appeared in Every Day Fiction, Zero Flash, 101 Words and Mystery Tribune (see Wrong Order and An Exercise In Futility). He lives in San Antonio, TX.

“Honey, don’t be on your phone while you’re driving.”

She glanced at her, then reached out and covered the top of her cold hand gently. Her bones felt as slender as cheap chopsticks. She remembered back when, as a little girl, she used to hold her mother’s hand during mass. It felt different then. Larger, warmer, alive. Everything did.

“You know I love me some Fiddy.”

When she pulled into the narrow drive-thru at Church’s Chicken, the glowing yellow sign reminded her of a micro sun, the way it beamed arrogantly against the night sky. These were old stomping grounds. Yet, everything felt unreal.

“Can I help ya?” said a man’s bored voice from the intercom.

The thin man wore a Spider-Man T-shirt with holes all over. His hair was long and matted.

“Yeah, let me get a ten-piece special with a side of mashed potatoes and mac ‘n cheese.”

Though her eyes registered the dark figure lurking by the passenger side of her SUV, her heart didn’t explode until a few seconds later. Her mom shrieked as though air had been sucked from her lungs.

The thin man wore a Spider-Man T-shirt with holes all over. His hair was long and matted. His beard too. He looked darker, Mexican, but you really couldn’t tell at this time. His eyes were deep set. Familiar.

She remembered the scorching summers when she’d see him march up and down the main farm road every single day, barefoot. Nuts. That was years ago.

“Yeah,” her mom answered. “He’s gotten worse since you left.”

He glared at her with black, insane eyes, then growled like a rabid dog. She remembered being chased once by a dog. He was as huge as a grizzly bear. Thank goodness she was on bicycle.

“You ain’t kidding,” she said.

“He’s kookier, but he’s harmless, the poor guy. The police just leave him alone. We all do.”

The chicken couldn’t come fast enough. As they waited, he did too, still glaring. Growling.

When she drove off, she kept her eyes on the rearview mirror. She watched him disappear—fade away, really.

The roads were empty. Past eight o’clock, this town slept hard.

The ringing in her head put her in a mood.

Stupid as it sounded, she imagined herself turning around and offering the man a few pieces of chicken. Asking his name. Giving him some cash. If handed a few bucks, she believed he’d do the right thing—save them for a hot meal.

Dumb as it sounded, she pictured herself also shaving off his filthy beard. She’d done this before, back in college. Several times she’d shaved the faces of her boyfriends, out of curiosity, mostly. They liked it. She got so good at it she considered becoming a barber. The only woman in a men’s shop, swiping clean the male flesh roughened by stubble. Seemed to her a real woman’s job anyway to clean up men properly. Also to be the one holding a blade against their necks.

“Honey, please slow it down. You’re going a little fast.”

Dumb as it sounded, she pictured herself also shaving off his filthy beard. She’d done this before, back in college.

Not fast enough to escape her tiny cubicle, the anxiety pills, the drink. The world these days, overlit offices, debt, day in day out; they did something awful to you. It might have been some indefinable force—God, they all say—that had relegated her to this scene.

She had decisions to make still—most pressingly the one facing her now. Who knew what would be the right thing? That could only be judged later.

Music playing, foot inching down on the accelerator, both hands strangling the steering wheel, she heard a whooshing sound fill the closing-in space between her and the passenger seat. A noise that wasn’t open to being quieted.

She looked down and held her breath. On the passenger seat chicken bones were piled in a small mound, like a cairn on an old trail. She wasn’t full but her fingers were greasy. The last time she checked, she was only a voice. She had to reconfirm from time to time because she still forgot. Don’t we all?

Her foot dug down; the engine roared. Nothing else out there in the blackness. Nothing at all.

Except the voice, and it whined: