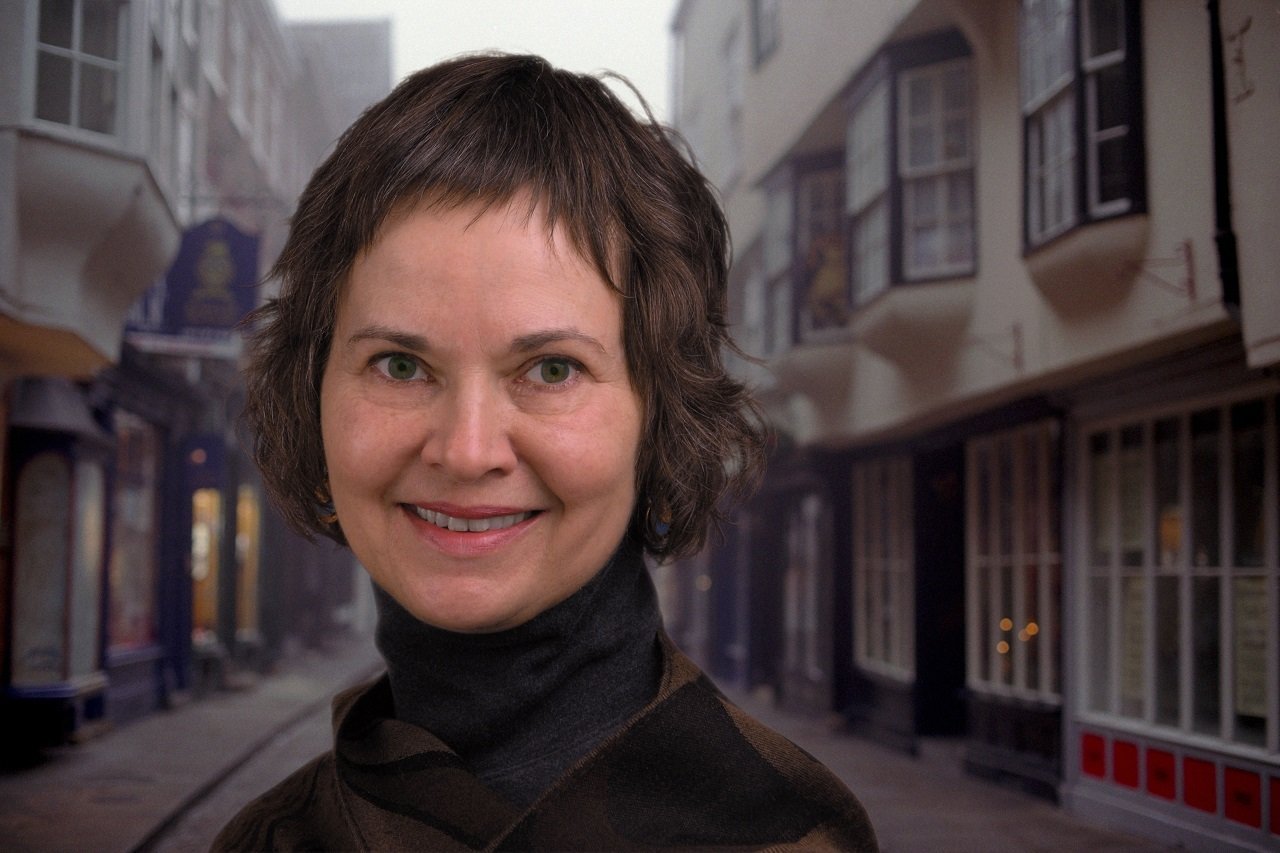 A Conversation with Candace Robb, Author of “A Twisted Vengeance”

A Twisted Vengeance is the latest novel of London Sunday Times bestselling author Candace Robb featuring indomitable Kate Clifford. The novel is a medieval mystery which will satisfy “lovers of Shakespeare’s Richard II” as one critic puts it. The book is the second in series with The Service of the Dead being the book that kicked the story off (read our reviews for these titles here and here).

What comes here is a conversation with the author on her latest novel, her inspirations for work and useful tips for the aspiring writers:

MT: Compared to Owen Archer, this is a relatively newer series for you. Tell us a little about these two novels and what motivated you to embark on the journey to write a new line of novels.

CR: The launch of the Kate Clifford series was part of my agent’s master plan for rebooting my career in crime writing after I’d taken a short detour into mainstream historical fiction under a pseudonym. I missed writing mysteries. She understood that I wanted to find a US publisher to re-release my Owen Archer series and advised that I begin something new while we waited to (a) find the publisher and (b) see some results—in effect, testing the market for the older series. I was keen to try out a female sleuth in a more permanent setting that in the Margaret Kerr series, in which I shifted locations in Scotland as the War of Independence progressed. While I was playing with ideas, Kate Clifford presented herself: a young woman with dark, curly hair striding down Stonegate in York with a devilish glint in her eyes, flanked by two magnificent Irish wolfhounds. I liked her, but the wolfhounds—the tallest of dogs, at this time often used as war dogs—why did she keep them in a city? Was she visiting from the countryside? She patted something hidden in her skirts. An axe. A small battle axe. She turned left onto High Petergate, she and the hounds moving as a unit, then left again into an elegant house, where she was greeted with respect as “Mistress” by an elderly couple though they, too, seemed of the merchant class. This was not her home, though she owned this property. A guesthouse? And so the Kate Clifford series was born. With a partial manuscript and brief descriptions of the first three books, my agent arranged a three-book contract with Pegasus. Meanwhile, Diversion Books reissued the entire Owen Archer series to great success. Win win. Now I have two York series.

MT: Perhaps the single most important aspect of the series, besides its fascinating historical details, is its female heroine. Tell us about Kate Clifford and how you developed her character.

CR: Once Kate Clifford came striding into my life I knew that I needed to take care to give her a background that would make her strength and self-sufficiency credible to readers who believe medieval women were uniformly meek and powerless. (They were not, especially not the rising merchant class.) I gave her a history, a reason to be skilled in weaponry, ever vigilant, pragmatic about the dangers of being a woman determined to choose her future, scarred emotionally, and liable to have skeletons in her closet that could resurrect in her life.

I gave Kate good cause to be a schemer. Her husband’s will was clear—he left her in charge of the business, but only until she remarried, at which time it would go to his brother, Lionel. (Quite common in wills of the time.) Imagine her pain when she discovered that her “loving” husband Simon had written such a will. But I did not stop with that. Simon had also left her drowning in debt. A year later she was introduced to his two illegitimate children, now orphaned by the death of her husband’s longtime mistress in Calais. But Kate’s not one to be defeated—she’s angry and determined, and she develops schemes to not only prosper, but to endear herself to the worthies of York—and gather secrets with which she can blackmail them if they think to turn against her. As she says, life is complicated.

I wanted her to be an integral part of the city without being completely at home there. I think that’s needed in a sleuth. As Owen Archer was. Kate was brought up in the countryside on the northern borders, with continual feuding and Scots raids, everyone in the family had been trained to defend the homestead. She is a bit wild, the hounds, her weaponry, the way she’s chosen her household help. But she’s determined to make the best of her life in York.

You’ll notice in the books that her dead twin Geoff is still very much alive in her mind—she thinks like a woman of her times, more open to mystery, not always operating with the rationalism we’ve embraced.

MT: What does your writing process look like? Tell us a little about how you get started and how you conduct research.

CR: The short answer regarding writing process: Each book grows in its own unique way.

The longer answer: My three crime series—Owen Archer, Margaret Kerr, and Kate Clifford—all work against the backdrop of the history of York (Owen and Kate) or Scotland (Margaret), so I begin by sketching out what’s been happening in history since the previous book, teasing it out about a year. Then I jot down a few ideas about what would likely be happening in the characters’ lives given that background. And then the play begins. I try out plots and scenes until I find myself focusing on one of the storylines and I’m off.

As far as research, it’s ongoing. I’ve kept up on research about the late medieval period in England since I began the Owen Archer series in the late 1980s. I regularly attend conferences on medieval studies, hobnobbing with medieval scholars, travel to the UK to research the locations, more hobnobbing with medieval scholars, keep up correspondence with historians working in the field, and read voraciously in medieval literature and history. So I have quite a background from which to pluck ideas. Each plot requires specific research, as I develop the idea and as I write, so it’s never-ending. And that’s just how I like it.

MT: What authors/novels have influenced you the most? Give us some recommendations from what you have read lately.

CR: Influence—I never know how to answer this. Influence in what way? I’ve never sought to write in the manner of someone else. My style/voice is my own. What a burden to try to write in someone else’s voice. I can say that Madeleine L’Engle’s A Wrinkle in Time blew me away as a kid, and I wrote to her inviting her to my Brownie meeting. She wrote back with her regrets. I was thrilled—this woman who wrote about other worlds wrote back to me on lovely blue stationary (remember stationary?) with her name and address embossed in gold. Reading her books was a revelation—imaginative fiction could have weight, could teach. Ursula LeGuin’s writing has always inspired me, and a workshop with her set me on the course of historical fiction. When I decided to try my hand writing a detective series, I was inspired by the novelistic styles of P.D. James and Colin Dexter. Each book felt complete in itself.

Recommendations: Henning Mankell, Donna Leon, Craig Johnson, Deborah Crombie—honestly, there are so many wonderful crime writers. I’m an eclectic reader. Last summer I gobbled up Ann Leckie’s Ancillary trilogy (science fiction) and I loved Uprooted by Naomi Novik (fantasy). I highly recommend Robin Hobb’s books (fantasy). The Vegetarian by Han Kang is the creepiest book I’ve read in a while. My friend Chris Nickson’s mystery On Copper Street is brilliant, and Booklist agrees, calling it one of the best crime novels of the past 12 months. You probably don’t want my history recommendations—mostly fairly scholarly, although Chris Given-Wilson’s biography of Henry IV, (Henry IV, Yale University Press) is beautifully written and I think quite accessible.

MT: Changing the subject to a more personal subject. I read somewhere that growing up, you wanted to be a ballerina. So what happened? How did you get started as an author?  What or whom inspired your decision to change your initial dream?

CR:  Not so much an inspired decision as making the best of a roadblock—after some teenage angst. When I was a freshman in high school, my ballet instructor told my parents she’d taught me all she could, it was time for me to try out for a local dance company. Panicking at the cost and the demands of such a step at that time, my parents put the kibosh on my dance career. I expressed my frustration on the folk guitar, singing my heart out. I also wrote dark, crazy stories sharp with black humor; fortunately a young English teacher took me in hand, seeing promise in my ferocity, and encouraged me to keep on expressing myself. She warned me never to show this particular writing to the nuns who ran the school. I didn’t. Journalism was another outlet. It wasn’t until the year between undergrad and grad school that I seriously turned to fiction, experimenting with horror, which resulted in several unfinished haunted house stories. I shifted gears to science fiction and fantasy after grad school in medieval lit, and had the good fortune to take a summer workshop with Ursula LeGuin. She suggested I focus on the historical underpinnings of the fantasy I was writing, where my medieval background shone through. I took her advice. Who wouldn’t? I’ve never regretted it.

MT: Give us a writing tip.

CR: Trust your gut. If you’re uneasy about what you’ve just written, get curious about whether it’s simply an unsettling scene—which is excellent—or you’ve lost your way—which probably means scrapping it and starting over. Your stomach and your readers will thank you.

Like Books By Candace Robb? Check out the following exciting titles.