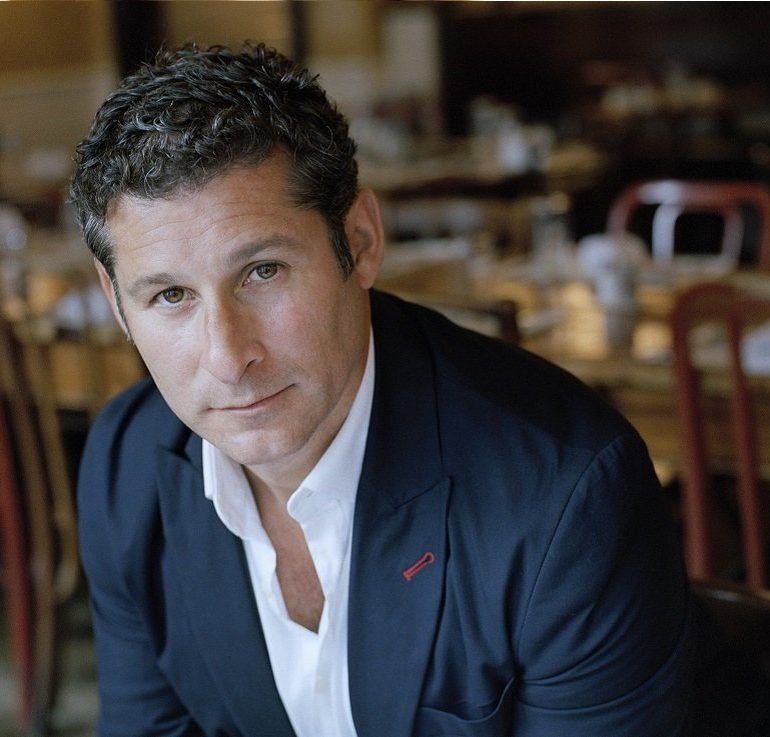 A Conversation with Chris Pavone, the Author of “The Travelers”

by the Edgar and Anthony award winner Chris Pavone became a sensation among many mystery lovers and many critics praised this novel for its masterful plot and engaging story. As Broadway Books will be releasing the paperback version of The Travelers

on January 10, we thought a conversation with the bestselling author was overdue.

Q) Your debut novel, The Expats, is set primarily in Luxembourg. Your second novel, The Accident, is set mainly in New York with parts in Paris, Zurich, and Copenhagen. When did you first begin to hatch the plot for your new novel and did you know right away where the action would take readers?

A) In the year before I started writing The Travelers, I went on family holidays to Argentina, where the book starts, and Iceland, which I thought would make a great setting for the dramatic end of a thriller. In fact, Iceland itself seems like the dramatic end of the whole world—the tectonic rift pulling the planet apart, the vast lava fields, the caves that might go all the way to the center of the earth, the geysers and glaciers and waterfalls and cliffs, the ever-present possibility of cataclysmic volcanic eruption. It’s awe-inspiring territory, exactly where a globe-trotting suspense novel should end. And this is after increasingly tense scenes in New York City and suburban DC, coastal Maine and the Eastern Shore of Virginia, Bordeaux and Barcelona, Edinburgh and Dublin, Paris and London, Stockholm, and—most thrillingly—Capri.

Q) The Travelers is a smart, stylish, and effortlessly seductive novel of espionage and intrigue that hops continents. What was your research like in terms of travel? Did you visit all these places yourself?

A) Yes, I’ve visited everywhere I’ve written about in all of my novels, or nearly so: I haven’t been to Capri in nearly three decades, so that memory is a bit hazy; and I’ve never been to Mendoza, where the book opens. Our family holiday in Argentina included a week in the Pampas somewhere so remote and pointless that it wouldn’t make any sense for multiple travel writers to be there, much less one, and the plot required a few to converge. Plot-wise, Argentina’s wine region made a lot more sense than our isolated estancia. But Mendoza wasn’t especially where I wanted to drag the kids.

Q) The Travelers hinges on the secrets in a marriage, much like your bestselling debut, The Expats. How does Will and Chloe’s relationship drive the action?

A) Looking back over the books I’ve written, it’s now obvious that I’m preoccupied with a couple of scenarios that might make my wife concerned. One is that someone goes to great lengths to adopt a new identity and move to Europe, which happens in all three books. The second is that one spouse or the other (or both) is fundamentally dishonest about very large issues. I think this is a possibility that we all live with, a near-universal worry, hopefully only at the farthest reaches of our consciousness: What if the one person I’m closest to is lying to me about something of utmost importance?

Q) The Travelers is filled with richly developed characters. Was there one character that you had more fun writing than the others? If so, why?

A) All my major characters are different versions of me. They think the types of thoughts I think, they make the types of decisions I can see myself making, they worry about the same sorts of things I worry about. This is satisfying to write, but what’s really out-and-out fun is creating the minor characters, the people who appear in only one or two scenes (and sometimes their main function is to die). I find it very liberating to write these small characters—they can be completely idiosyncratic, even unsympathetic—and by the time any reader has the chance to be bothered, the character is already dead.

Q) In the novel, a good deal of time is spent outlining what your characters do for a living, what motivates them, and how they feel about their jobs. This seems to be something you’ve given a great deal of thought to. Why?

A) Each of my books has a dominant theme. The Expats was about marriage, about intimacy and dishonesty and power within this relationship. The Accident was about ambition: the things we are willing to do and to sacrifice, the people we are willing to become on our paths from youthful ideals to mature realities. And The Travelers is about work, about the different relationships we have to different sorts of labor, as well as our very different types of employers—the institutions as well as the individuals. I wanted to create characters who’d look at labor from many angles: middle management and upper; underlings and freelancers and a resentful stay-at-home mother who’s trying to get back into the workforce; people who do whatever they want for a living and people who are merely trying to survive. And I wanted some of these people—in fact, many of them—to have an incomplete or erroneous understanding of whom, exactly, they are working for, and why.

Q) Hardly a page of The Travelers goes by without one character lying to another. What role does lying play in a thriller?

A) I’m not a huge fan of violence, so I don’t want my stories to rely on threats of violence to develop tension, nor on depictions of violence to create resolution. But I still want to develop tension, and I also want some of this tension to escalate toward lethal, because otherwise I don’t really have much of a thriller. So that’s where all the lying comes into play. And not just lying between strangers, but between intimates—between colleagues, between close friends, between spouses. That’s how I try to build intrigue and drama without someone pulling a gun every few pages.

Q) The world of book publishing figures quite prominently in The Accident. In your new novel you dip into the travel magazine world. It all sounds so glamorous! International press junkets, trips to exotic hotels, fancy dinners. Do you have any firsthand experience in this world?

A) When I was a child, my family spent two months out of every year driving around Latin America. And as an adult novelist and a parent to adventurous children, I now spend a similar amount of time away from home every year, either on family holidays or working in one capacity or another. I think travel turns all of us into possibly fictionalized versions of ourselves. Could some version of me live here? Could I do this? It’s exciting to contemplate, and it’s exciting to read about. As it happens, I’m typing this sentence at a sidewalk table of the Gran Café de la Parroquia in Veracruz, a shabby port on the Gulf of Mexico to which I’ve come for the express purpose of writing.

Q) From Argentina to Bordeaux, Will Rhodes often finds himself in some of the best wine regions in the world. Would you consider yourself a wine connoisseur?

A) When I was in my twenties, I did. I even wrote a book about wine, after a fashion (it’s mostly blank pages). But then I decided that I didn’t want to be someone who was always swirling my wine, and contemplating aromas, and jotting down tasting notes; I didn’t want people to see me that way, and I didn’t want me to see me that way. So I gave it up. And I think the wine palate is like anything else: it can fall out of practice. Mine certainly has. I still love what I love, but I no longer take it seriously.

Q) The Travelers has recently been acquired for film by DreamWorks. Have you given any thought as to who might play some of the lead characters in the novel?

A) There’s a cynical middle-aged editor-in-chief who might be a spy, or a traitor, or a criminal, or all three, and I think George Clooney would do an excellent job in this complex role. Julianne Moore is my ideal for his increasingly unhinged stay-at-home wife. For the protagonist’s wife—we really don’t know what the hell she’s up to—I’d love to see Keri Russell, who has also become my imaginary first choice for the lead in The Expats; everything she brings to her character in The Americans is everything I was trying to create for the protagonist of The Expats. But for the protagonist of The Travelers, I can’t yet see any actor inhabiting that role. It took me a half-decade of distance before I could graft Keri Russell’s real face onto Kate Moore’s imaginary character. I’m not yet ready to relinquish my 100 percent ownership of Will Rhodes.

Q) The Expats was also acquired for film by CBS Films. How are the movie plans coming along?

A) The Expats is certainly not going to set any speed records for becoming a movie, but every once in a while forward progress occurs. I honestly don’t understand that business at all, and luckily I don’t need to. I don’t make films. I write books.

Q) What are you working on next?

A) I’m at my favorite stage of writing my fourth novel: I’ve gotten under way recently enough that it still feels fresh, but not so recently that I’m still lost. Every day is about invention, which is the fun part, the part that doesn’t feel like work. Revision is the part that feels like a job.