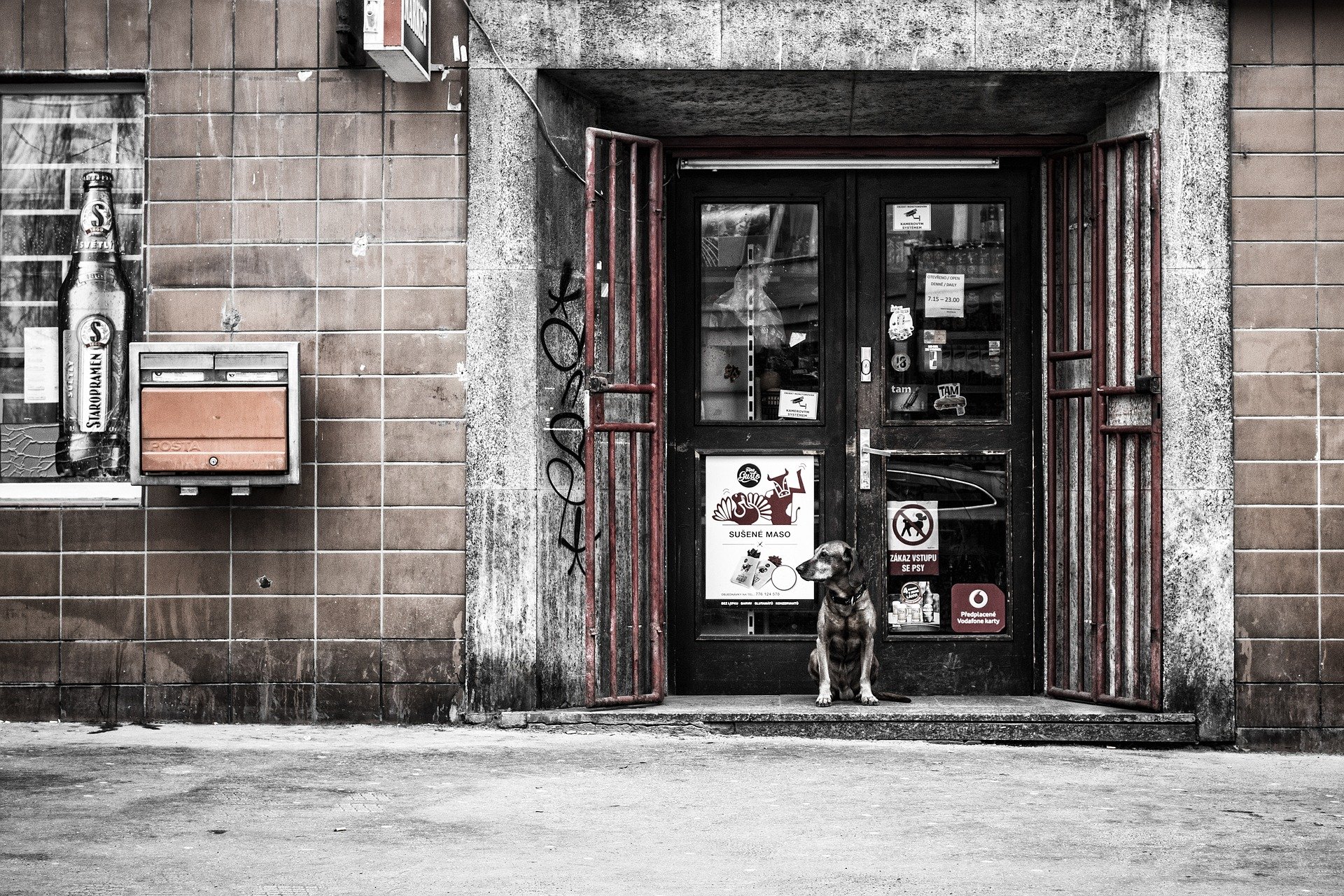 George Garnet, author of Don’t Get Alone, has published short fiction in Switchblade, Out Of The Gutter, Mystery Weekly, The Dark City Crime and Mystery Magazine, The Literary Hatchet and elsewhere. In his free time he enjoys reshaping pieces of wood into African Masks. He lives in Melbourne.

“Don’t get alone when you…” the old man mumbles to himself while rounding the corner of the dilapidated pawn shop building, and bumps into one of the dope dealers.

“What the fuck?” the dealer, a skinny young guy wearing Adidas trackies and a jumper grunts and recoils.

“Fuck, old man. Whatcha wanna?” the young guy grunts and turns to his partner, a stocky man with a short haircut and a toothpick between his thick lips. “You know this oldie, Bollard?”

Bollard clears his throat and spits on the cracked concrete. He takes a measuring look at the old man and decides on some fun. “How can we help you, grandpa?” he says with exaggerated  benevolence, “Any service that we can provide to you?” It’s obvious he finds all this amusing.

“Thank you. Bollard, right?” the old man says, his knotty fingers playing with the one and only button on his grimy jacket. He keeps twisting the button while his pale blue eyes study the two men in front of him. He throws a quick look around. It’s early morning and except for the three of them there is no one in the parking lot. Some thirty yards away, beside a fallen garbage bin, a stray dog chews on a left-over pizza,  teeth crunching loudly.

“You hear it right. It’s a miracle how Radonja here still remembers my Hollywood stage name,” Bollard chuckles and pulls away from the wall. “So, what can we do for you?”

The skinny dealer, named Radonja, eyeballs his partner. “What the fuck’s goin’ on, Bollard?”

“Let the man speak his mind,” Bollard says and leers at the old man. The day started slow and he is bored.

“What? Hey grandpa, get moving! Get the fuck out of here,” Radonja grumbles as all this starts to get on his nerves. They have business to run here and some old fart is going to chase their customers away. He tosses another glance at the old man’s sneakers, one with a hole at the toe, his soiled brown trackies, his baggy black jacket, and the scruffy grey baseball cap with ‘Number One Gramps’ embroidered in bright red. The old man reeks of onions and Radonja, disgusted, pulls back.

“Let’s have some fun,” Bollard smirks under his breath and shoots a glance at Radonja.

It’s quiet for a moment. The old man’s unblinking eyes, keep studying the two men with curiosity now. Under his bushy eyebrows they move slowly from one man to the other. Back and forth. “I want to do some business with you,” he breaks the silence.

“Let’s have some fun,” Bollard smirks under his breath and shoots a glance at Radonja.

“Just business,” the old man says quietly and slides his hands in the pockets of his jacket.

“Business? Do we look like we sell blue pills? Wha’ you say, Bollard? Maybe the grandpa here just got a young lover, eh? Some sexy chick, early 70s, eh?” Enchanted by his own wit Radonja starts howling like a hyena, his wide-open mouth just a gap with its missing front teeth.

Unmoved by Radonja’s chant the old man says tiredly, “How about some ice?”

“What? Ice?” Radonja stops laughing as if punched in the ribs. He throws a quick look around. The parking lot is empty. The loose dog is gone and the dry birch tree in the far end of the parking lot stretches its branches like dead hands reaching for the sky. “Did I hear that right, Bollard? Ice?”

Bollard stops chewing the toothpick. His eyes wrinkle at the corners and his jaw muscles tighten. He stares at the shabby figure of the old man as if seeing him for the first time.

“Ice,” Bollard echoes, locking eyes with the old man’s. “Where did you hear that from?” Something’s wrong here. Bollard is silent now, all ears.

The old man fishes out a phone from his jacket pocket and clicks a button. The small screen comes alive and the photo of a blond girl, no more than seventeen years old, illuminates the screen. “My granddaughter, Millie.” He stares at the image, his pale blue eyes empty. “So, you’re Rado and Bodo? She called you two days ago,” he says quietly.

Bollard tenses, his strong legs move apart. Only dedicated junkies know them as Rado and Bodo. The cousins. His hand, slightly trembling, is ready to grab for the .38 with the wrapped grip, tucked in his waist band.

The old man fishes out a phone from his jacket pocket and clicks a button. The small screen comes alive and the photo of a blond girl, no more than seventeen years old, illuminates the screen. “My granddaughter, Millie.”

Before he moves, the old man pulls out his other hand from his jacket pocket, his fingers clutching an ancient Colt. He points the gun at Bollard. “Don’t!” he says, the Colt steady in his hand.

“She can’t come,” the old man whispers. “She died yesterday. Overdose the doctor said. Ice.” He swallows hard and his fingers tighten over the grip of the Colt. Two deafening bangs kick Bollard in the throat and cut his laugh down. He instinctively grabs for his throat, steps backwards and drops to the cracked concrete. “Sick old f…” He doesn’t finish the sentence. Something gurgles in his mouth. His left leg twitches before his body goes limp.

The old man lowers his gaze at the image of the girl on the phone screen. “She was my only family and you took her away. Don’t get alone when you are old…”

He shoots Radonja square in the chest.

If you’ve enjoyed Don’t Get Alone by George Garnet, you can check out our free digital archive of crime, thriller, and horror flash fiction here. Additionally, premium short fiction published by Mystery Tribune on a quarterly basis is available digitally here.