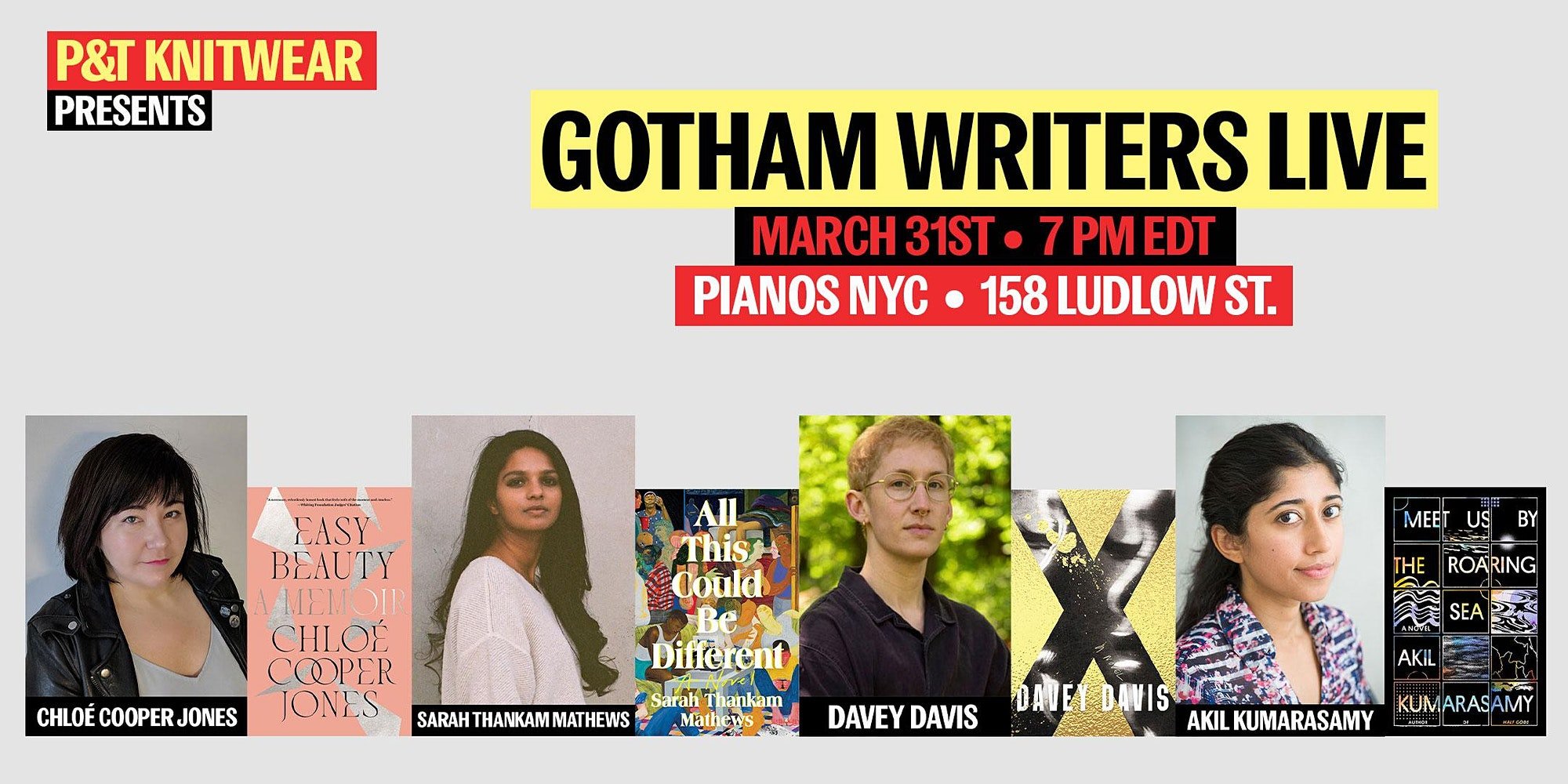 Join us as we kick off our first in-person series, Gotham Writers Live!

Inspired by the Gotham Book Prize, Gotham Writers Live is a ticketed bi-monthly series highlighting notable authors writing about or living in NYC, with each showcase built around a different theme. For our inaugural event, we’re joined by four NYC writers whose new releases are creating a lot of buzz. Chloé Cooper Jones (Easy Beauty), Davey Davis (X: A Novel), Sarah Thankam Mathews (All This Could Be Different), and Akil Kumarasamy (Meet Us by the Roaring Sea) will read from their new and forthcoming books, followed by a panel discussion moderated by P&T Knitwear’s own Arianna Rebolini.

This is an in-person, ticketed event at the legendary Lower East Side venue Pianos. Tickets are $5, which can be used toward a book purchase or pre-order (coupon code delivered after purchase). A limited amount of signed copies will be available for pre-order. Pre-orders will also include a set of P&T Knitwear postcards. All books are available for purchase here.

Chloé Cooper Jones is a philosophy professor and freelance journalist who was a finalist for a 2020 Pulitzer Prize in Feature Writing. Her work has appeared in publications including GQ, The Verge, VICE, Bookforum, New York magazine, and The Believer, and has been selected for both The Best American Travel Writing and The Best American Sports Writing. She lives in Brooklyn, New York.

Davey Davis’s first book, the earthquake room, was released by TigerBee Press in 2017. They write a weekly newsletter and mutual aid fundraiser about art, culture, sexuality, and people named David at itsdavid.substack.com. They live in Brooklyn.

Sarah Thankam Mathews grew up between Oman and India, immigrating to the United States at seventeen. She is a recipient of a Best American Short Stories 2020 award and fellowships from the Asian American Writers Workshop and the Iowa Writers Workshop. All This Could Be Different is her first novel.

Akil Kumarasamy is the author of the story collection Half Gods, which was named a New York Times Editors’ Choice, was awarded the Bard Fiction Prize and the Story Prize Spotlight Award, and was a finalist for the PEN/Robert W. Bingham Prize for Debut Fiction. Her work has appeared in Harper’s Magazine, American Short Fiction, Boston Review, and elsewhere. She has received fellowships from the University of East Anglia, the Provincetown Fine Arts Work Center, Yaddo, and the Schomburg Center for Research in Black Culture. She is an assistant professor at the Rutgers-Newark MFA program.

“I am in a bar in Brooklyn, listening to two men, my friends, discuss whether my life is worth living.”

So begins Chloé Cooper Jones’s bold, revealing account of moving through the world in a body that looks different than most. Jones learned early on to factor “pain calculations” into every plan, every situation. Born with a rare congenital condition called sacral agenesis which affects both her stature and gait, her pain is physical. But there is also the pain of being judged and pitied for her appearance, of being dismissed as “less than.”

The way she has been seen—or not seen—has informed her lens on the world her entire life. She resisted this reality by excelling academically and retreating to “the neutral room in her mind” until it passed. But after unexpectedly becoming a mother (in violation of unspoken social taboos about the disabled body), something in her shifts, and Jones sets off on a journey across the globe, reclaiming the spaces she’d been denied, and denied herself.

From the bars and domestic spaces of her life in Brooklyn to sculpture gardens in Rome; from film festivals in Utah to a Beyoncé concert in Milan; from a tennis tournament in California to the Killing Fields of Phnom Penh, Jones weaves memory, observation, experience, and aesthetic philosophy to probe the myths underlying our standards of beauty and desirability, and interrogates her own complicity in upholding those myths.

X: A Novel by Davey Davis

A thrilling portrait of political terror and the violent pleasures found in warehouses, bathrooms, and dungeons across New York City, X is a novel that delves into the psyches of characters on the margins.

The world is ending, and down-and-out sadist Lee spends their days working for a big corporation and their nights wandering the streets of Brooklyn listening to true crime podcasts. But everything changes when Lee is dragged to a warehouse party by their best friend, where they find themself in the clutches of the seductive and bloodthirsty X. When Lee seeks her out again, she’s nowhere to be found.

Amid the steady constriction of civil rights and the purging of migrants and refugees, the U.S. government has recently begun encouraging the semi-voluntary “exporting” of undesirable citizens—the radicalized, the dissident, and the ungovernable. Word has it that X may be among those leaving. If Lee doesn’t track her down soon, she may be gone forever.

All This Could Be Different by Sarah Thankam Mathews

Graduating into the long maw of an American recession, Sneha is one of the fortunate ones. She’s moved to Milwaukee for an entry-level corporate job that, grueling as it may be, is the key that unlocks every door: she can pick up the tab at dinner with her new friend Tig, get her college buddy Thom hired alongside her, and send money to her parents back in India. She begins dating women—soon developing a burning crush on Marina, a beguiling and beautiful dancer who always seems just out of reach.

But before long, trouble arrives. Painful secrets rear their heads; jobs go off the rails; evictions loom. Sneha struggles to be truly close and open with anybody, even as her friendships deepen, even as she throws herself headlong into a dizzying romance with Marina. It’s then that Tig begins to draw up a radical solution to their problems, hoping to save them all.

A beautiful and capacious novel rendered in singular, unforgettable prose, All This Could Be Different is a wise, tender, and riveting group portrait of young people forging love and community amidst struggle, and a moving story of one immigrant’s journey to make her home in the world.

Meet Us by the Roaring Sea by Akil Kumarasamy

In the near future, a young woman finds her mother’s body starfished on the kitchen floor in Queens and sets on a journey through language, archives, artificial intelligence, TV for a way back into herself. Along the way, she translates an old manuscript about a group of female medical students—living through a drought and at the edge of the war—as they create a new way of existence to help the people around them. In the process, the translator’s life and the manuscript begin to become entangled.

Soon, the arrival of a childhood friend, a stranger, and an unusual AI project will force her to question her own moral compass and sense of goodness. How involved are we in the suffering of others? What does real compassion look like? How do you make a better world?

Written in vivid and pulsating prose, alternating between her present life and passages of the translated manuscript, Meet Us by the Roaring Sea is a remarkable, genre-bending exploration of memory, technology, friendship, love, consciousness, and the costs of caring for others in an age where we are so often lost in the swamps of our own minds.