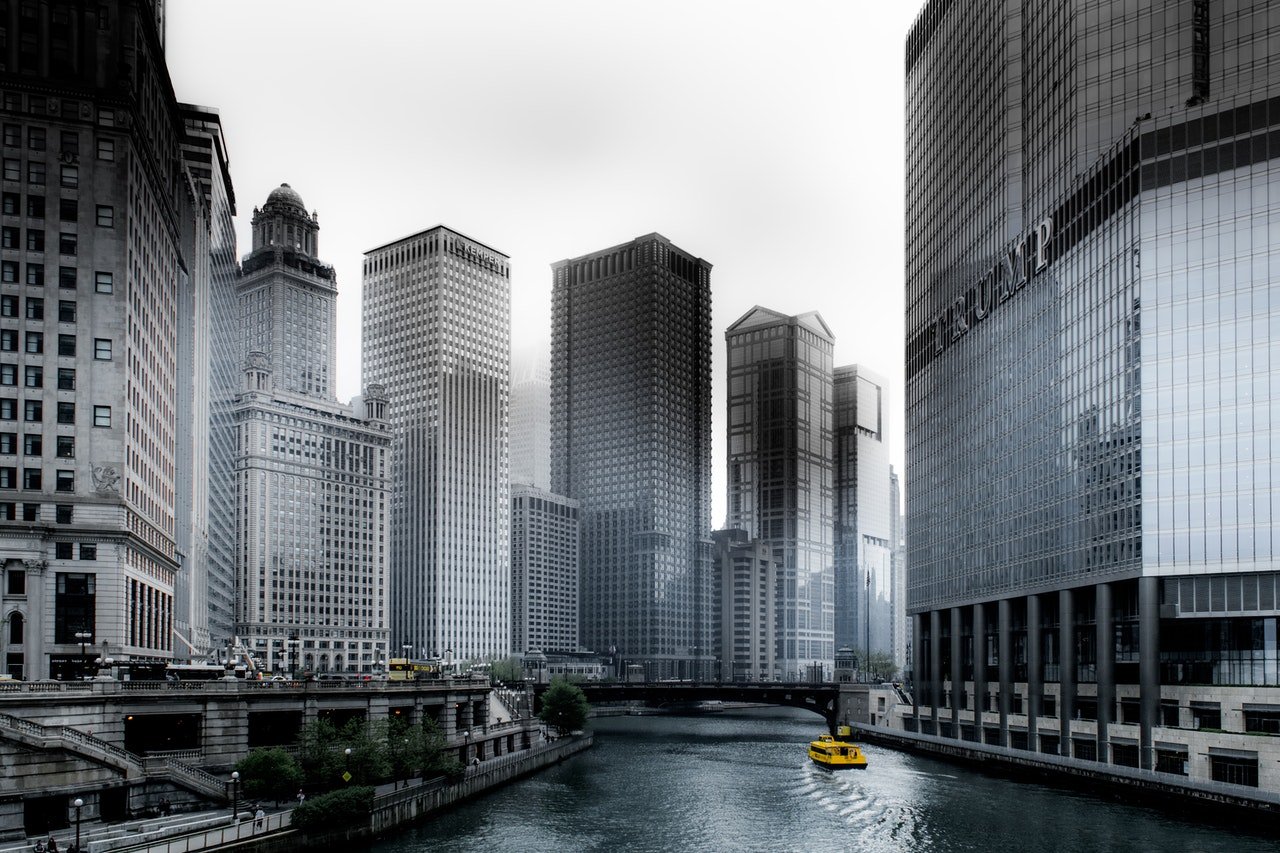 Nils Gilbertson, author of Evil Men and a practicing attorney, has previously published short fiction in Mystery Weekly Magazine, Rock and a Hard Place, and Pulp Modern. A San Francisco Bay Area native, he currently lives in Washington, D.C. with his wife.

The suited man barely looked up from his phone. “Hi there.” As he spoke, he felt the shadow in his peripheral stop and turn towards him.

The suited man pocketed his phone and gave the stranger a thorough look. Gray curls sprouted from his worn face, but not enough to call it a beard. A creased soda cup jingled in bone-thin hands. “Washington, D.C.,” he said.

“Uh-huh. I been by the White House once, long time ago. You ever been there?”

“Got a real homeless problem there, huh?”

The suited man shrugged. “As much as most big cities.”

The man scratched the tangled hairs like dying weeds on his jawline. The sun reflected off a thick, smooth scar that ran below his left eye. “I’m homeless, see, but I got a job down at the corner store the other day. They don’t start paying me for a few weeks, though.”

“They ought to start paying you now,” said the suited man.

“Glad to have the chance at all.”

There was a moment of quiet between them, but the homeless man didn’t turn to leave and the suited man didn’t take out his phone.

A young family walked into the five-star hotel, which overlooked the Riverwalk in downtown Chicago. The woman was pregnant.

“Hi folks,” the homeless man said. “God bless you and the baby, ma’am.”

The mother gave him a nervous smile and thanked him.

He waited for them to pass and then turned back to the suited man. “Most folks is nice, you know.”

“I hope so,” the suited man said. “People ought to be good to each other.”

There was a moment of quiet between them, but the homeless man didn’t turn to leave and the suited man didn’t take out his phone.

“But there’s a lot of snobs out there,” the homeless man added, the sun once again catching his scar. “I was out here last week; one lady came up and spit in my face.”

“Ain’t that bad though, being homeless. Until the winter at least. I got an ol’ buddy back in Clarksdale, Mississippi where I grew up. Came home one night, whole family murdered.”

The suited man shook his head. “Sometimes it’s hard to fathom what people can do to each other.”

The suited man nodded. “I like it all right. Better than here. The tall buildings make me nervous.”

The homeless man laughed and it turned to a dry cough that left him heaving. He snorted and spit on the cracked sidewalk.

“You got any family?” the suited man asked. “Friends who can help you out?”

He nodded. “I got a wife. She’s homeless too. Both legs amputated from diabetes.”

“She get any treatment?”

“We can get insulin all right.” He paused and removed his frayed White Sox ball cap and wiped his brow. He moistened cracked lips. His teeth were long and crooked, exposed by swollen, receding gums. “Other day, she told me she don’t feel pretty no more. So I’m trying to buy her flowers. Some clowns are running scams out here, but I’m not—”

Before he’s finished the suited man had reached for his trembling hand and slipped a few large bills into it. The homeless man stared down at it like it was Monopoly money.

“My ride’s here,” the suited man said, nodding at the black Cadillac SUV in front of the hotel. “I’m sorry it’s only money. I’ll be back in three weeks from today at the same hotel. Go in and ask for Mr. Christensen.”

“In there?” he said, eyeing the palatial entrance, avoiding the doorman’s stern gaze.

“Yes. Good luck with your job. And tell those assholes to start paying you now. That you need some cash up front.” He paused. “Rather, fuck them. You need a job? Find me here in three weeks. Plenty of work to go around.”

“Bless you, sir,” he said, as though he wasn’t certain the man was real.

The driver opened the passenger side door. Once they were in the car he asked, “Make a new friend, boss?”

The suited man stared out the window at the late afternoon sun reflecting off the glass skyline. He thought of what it would take to crack the thick, 100th floor panels, marveling at the fact that enough of a fragile thing could be strong—unbreakable. “Best conversation I’ve had in a while.”

The plane touched down at Reagan National Airport at 10:32 p.m. From there, another black Cadillac picked up the suited man. It drove from the airport through downtown, then south to a warehouse in an empty lot surrounded by chain link fencing, overlooking the Anacostia River.

Inside, there was a man in dark gray slacks and a crimson-soaked dress shirt tied to a folding chair on top of a large clear tarp.

Two men, one built like a linebacker, the other small and wiry, were working him over. Dried blood crusted his whiskers and he cowered with anticipation just before the bigger man’s fist struck the bridge of his nose. Bone splintered—a sharp crack like a tree branch. The broken-faced man wailed and gargled and spit. A fresh coat of blood painted his stubble and dripped, sticky, from his chin.

“How’s the Hill’s most impotent chief of staff?” The suited man asked.

He let out a groan like a dying animal.

The suited man approached him and examined the damage. “Not too bad, given that floor speech your boss gave after the deal we had.”

“Ya didn’t have the votes anyway,” he slurred, wincing at the slightest movement.

“You think this is about votes?” the suited man said. “Fuck the votes. We had a deal and he goes and does his little dog and pony show, acting like he’s Abe fucking Lincoln. You didn’t get it done, Hal. Again. You fucked me again. And I don’t like getting fucked by anyone but my wife.” He nodded towards the smaller man, who pulled a Glock 19 from his hip.

“Jesus,” the bloodied man said, “are you insane? They’ll—there’ll be a search for me. A—an investigation.”

“Let them investigate. Whose firm do you think they’ll tap to assist? All your Hill buddies will kick and scream and point fingers and we’ll call it a mugging gone bad in six months. Or suicide. Or you’ll disappear off the face of the earth and we’ll say inconclusive. Your death will be party politics. Fodder for cable news banter. Forgotten after the next election cycle.”

The suited man laughed. “Illegal? Shit, illegal when we do it. When you do it it’s justice. Or savvy politics.”

The wiry man held the handgun to the trembling, weeping man’s head.

“Evil—how about that?” the suited man said to his stone-faced companions. He looked back to the man in the chair. “We’re all evil, Hal. Every last one of us. Just like we’re all good. Some of us hide from this. They call the evil they do good when it suits them.

It’s your last chance to break that nasty habit. Repent, if you will. Say it with me: I am an evil man.” He prompted the man in the chair to join him. When he refused, the suited man backhanded him in his already-cracked cheekbone. A whine like a leaking balloon. Pleading, choking on gobs of bloody phlegm.

The suited man squatted, staring into the slivers of watery eyes engulfed in blackened sockets. “Yes. They will suspect me. That’s the point.” He nodded at the wiry man.

A shot pierced through the dull hum of the generator and reverberated in the empty warehouse. Blood and brain and skull pelted the tarp.

“What do you want to make it look like?”

“Oh, and one more thing. I have a friend in Chicago who needs work. Low-level stuff, but decent pay. Nothing too dirty.”

“We’ll have it arranged.”

The black Cadillac drove the suited man through downtown to a brick colonial-style manor on a sprawling lawn in Northwest D.C. Inside he poured himself a glass of warm milk with a splash of Baileys. He sat at the marble counter and drank it slowly, staring through the window, studying the night. He took a cold shower, shaved, kissed his kids goodnight, and crawled into bed next to his wife.