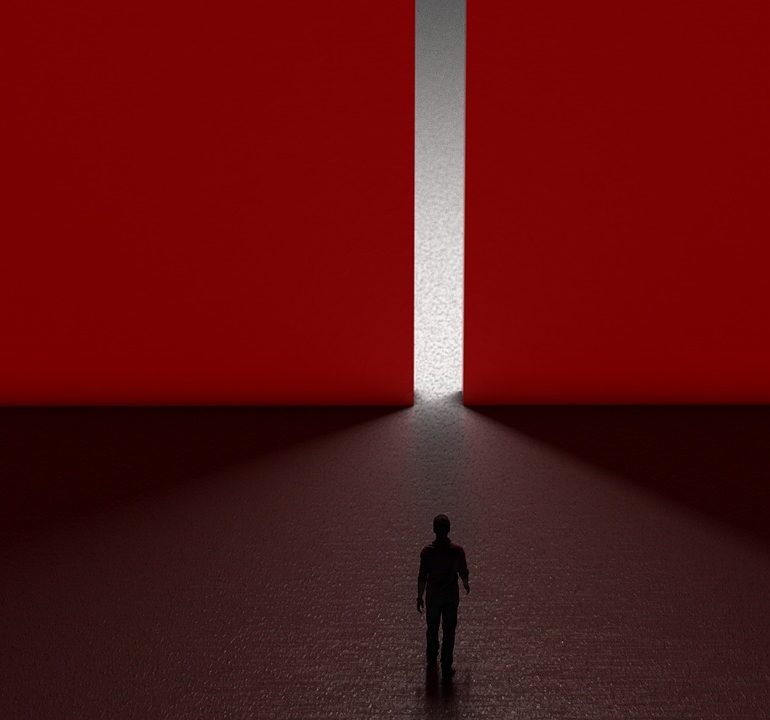 Flash Fiction: If Only I Could Feel By Tom Gumbert

Short fiction by Tom Gumbert has appeared in Riggwelter, Figroot, Porridge Magazine, and formercactus. He lives with his wife Andrea in Southwest Ohio in a log home near an Indian Burial Mound.

My hands pressed harder into the soft flesh, thumbs against the larynx as I stare into the bulging eyes of my victim. I watch as the man changes color from a rather pale white, to red, and now blue, feel the struggle waning as time passes, the energy leaving this man whose curled lip exposes yellow incisors. Spittle clings to the tooth, just as the man is attempting to cling to life. He’d shed tears, the tracks still visible across his temples, and I wonder what it felt like to weep; what it’s like to feel fear, pain, to feel anything.

His hands slip from my wrists, no longer capable of trying to remove them. He twitches beneath my weight, then ceases movement, his eyes fixated. I remove my hands and wait…nothing. No remorse, no thrill—nothing.

I get him to his feet, then over my shoulder. Picking my way up the path, over crabgrass and dandelions, pushing aside the honeysuckle, soon I reach the railroad trellis at the top and lay him across the track. I stand over him and think about what she said.

I hadn’t responded, and she retorted, “I’ll find a real man, one who isn’t mechanical in bed, one who can actually show passion.”

I gave what I thought was a logical answer—“Okay. If that’s what you need.”

“What is wrong with you?” she wailed as she flailed against my chest, her hands balled into fists that struck me repeatedly. I considered her question but couldn’t come up with anything.

“You’re a monster,” she’d told me. “No, worse, because monsters have feelings. Frankenstein, Dracula, even Jason-fucking-Voorhees had feelings. You are…you’re a, a psychopath or sociopath or whatever. You’re a zombie without an appetite,” she panted, mascara running down her tear stained cheeks, “and I pity you. I really fucking pity you.”

In the days immediately following her departure, I considered her words and the evidence she’d presented. She loved movies and we’d watched It’s a Wonderful Life, Titanic, Marley and Me, and Up and she’d sobbed through each, while I felt…nothing. When her Grandmother died, she’d stayed in bed for three days sobbing, inconsolable…I think. In retrospect, I didn’t try consoling her. I’d felt nothing and couldn’t fathom what she was feeling. But what if it had been someone I knew like a close friend or family member? But I had no family or close friends, and really, who did I know? Who can we really know? Certainly not ourselves.

A thought occurs to me. I kneel beside the man on the tracks and rifle through his back pants pockets until I retrieve his wallet. Opening it, I find the photos. He had a wife, a little girl, a baby boy. They are smiling, presumably happy, or pretending to be. I try to imagine what they will feel when this man—the husband and father, doesn’t come home. Worry? Anger? Fear? Sadness? These are just words to me. Words without context.

My feet tingle as the rail vibrates. In the distance I see a single light. I drop the wallet on the man’s chest. I should go. But I don’t. I stand there with hands now in my pants pockets and watch the light get closer. When it reaches the bridge, the train whistle cuts through the night and seconds later, the train cuts through us.

I lay in the bramble and thistle aside the base of the bridge, my body covered in blood. Though my vision is blurred and my ears clogged, I am alive. I flex my fingers, then my toes and finally I’m able to move my arms but not my legs. I struggle to the sitting position to take stock. My shirt is in tatters and my skin over my stomach, ragged and moist. I probe with my fingers—what the…? I close my eyes one at a time and realize that I can see out of my left eye. Leaning forward I inspect my wound, see the wires and circuit boards. I put my hands over my face, and cry.