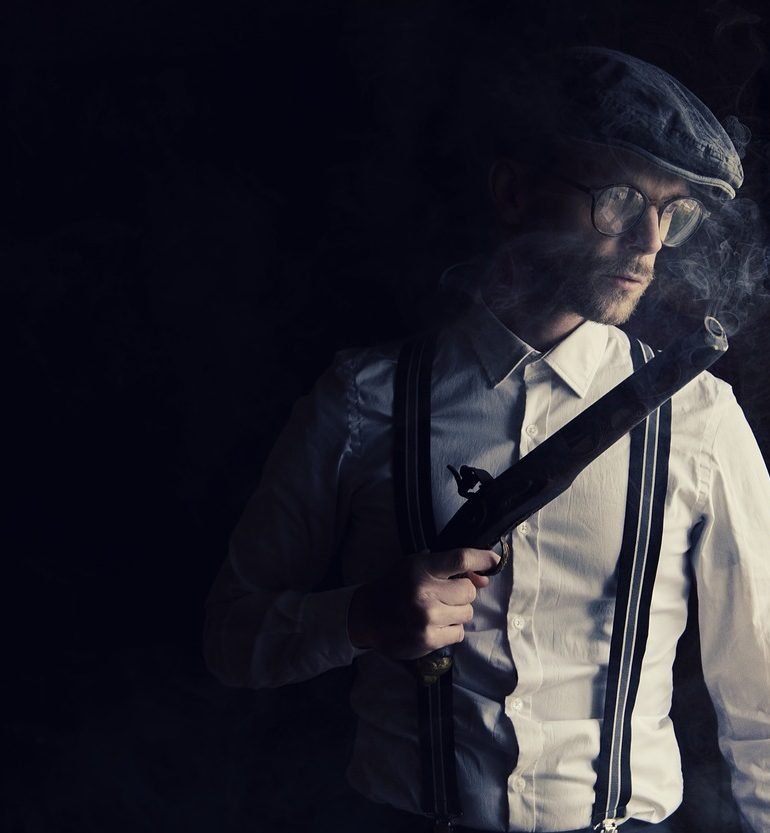 Author Donald Dewey argues that it has become too easy to identify the killer in both fiction and nonfiction.

I always know who the killer is. I don’t consider this either a gift or a curse, though some people have sought to persuade me it is one or the other. According to them, always knowing the killer implies extraordinary insight into human behavior or means I can’t take pleasure from detective stories, national scandals, or international conspiracies. The two sides agree that (in the political cant of the day) it can’t be easy for me to realize I’d known then what I know now.

Both the flattery and the pity are misplaced. Always being able to identify the killer is just intuition vindicated by suspect imaginations, and in this I am hardly alone. Political rabble rousers and media moguls, to name two groups, have displayed the same abilities to their immense social and financial gain. The only difference between us is the odd million people or odd billion dollars.

Okay, maybe one other difference, too. While the rabble rousers and media moguls are always delighted to have their intuitions borne out, I rarely am. Forget how exasperating it might be not to be able to guess along with a detective hero until the near-end; actually, zeroing in on the killer with his first appearance on the page or screen can set in motion other chains of pleasures, foremost the one about seeing whether the creator in question earns his climactic unveiling. Similarly, I might grasp at once who is wearing the black hat in some sordid tabloid tale involving a public figure, but that doesn’t necessarily prevent me from savoring over weeks and months the fine spirals of descent from denials and no-comments to admissions, apologies, and arrests.

In short, I’ve never confused myself with Orson Welles, about whom it was said he never truly enjoyed a movie because he was too practiced in all its separate artistic and technical ingredients. Whether true or not about Welles (and I doubt it is), it isn’t my own brilliance that bothers me about my prompt identification of killers. As I see it, the real problem lies in the sheer predictability of so much of what passes these days for a mystery, fictional and non-fictional. It simply depresses me that others can regard “The Emperor’s New Clothes” as a whodunit.

Start with fiction. As any bookstore browser or movie-goer can attest, we have traveled quite a distance from the once-standard plausibilities of homicidal envies, jealousies, and angers. The terrain around us today is more commonly dotted with lazy speculations about serial psychopaths, computer-generated thugs, or genocide-bent extraterrestrials. Even the extremes of human motivation have been shunted aside as being too bland, replaced by a science-fiction spirit of fixing ultimate blame on one kind of warped gene or another.

The convenient part of this trend for its creators is that they don’t have to be any more responsible for their choices than their characters do. They can be as acrobatic — and insubstantial — as a Matrix entity. Even the logic that was stretched to the limits of elasticity with a yarn such as Agatha Christie’s Murder on the Orient Express has lost whatever remained of its resilience with lack of inventive commitment to coherent plot and character: Instead of Everybody being revealed as the culprit, contemporary stories ricochet back and forth in structureless paranoia until, finally, Anybody steps out from behind the curtain. And on the offchance that even Anybody might be construed as being too specific, insinuating a hard creative choice, there will be a few tacked-on endings — the first usually contradicting the thrust of the foregoing narrative, the second contradicting the first, and the third contradicting any residue of sense left. Within such an arbitrary perspective, how could I not know who the killer was?

The wiliest fiction minds are those that, aware of troublemakers like me, pretend to celebrate the classic forms of logical deduction so we’ll stop our sniping. One of the best illustrations of this diversionary tactic was the long-running TV series “Columbo.” What, “Columbo” not logical? Well, yes and no. The Peter Falk character himself was; he was nothing if not that. But while the internal mechanics of the hero’s logic were usually impeccable, there was seldom sufficient credibility behind the manner in which he drafted the facts that activated his reasoning processes.

The key to this hocus-pocus, and to the popularity of the show for decades? We the home viewers. We always knew precisely how each elaborate killing was carried out and for what motives. From this starting point we then conceded knowledge, insights, and suspicions to the Falk hero that, objectively, couldn’t be conceded most of the time. For crucial clues, in other words, the “Columbo” writers always depended on us to do their writing for them. We in turn were so presumptuous about what we knew that we forgot that the lieutenant, sly as he was, could not possibly have smelled something amiss about finding an ashtray on a left end-table instead of on the right one. We were given answers to questions that, as in some solipsistically demented version of “Jeopardy,” couldn’t legitimately be asked of others. Or, as the “Columbo” creators might prefer it, we were accomplices before, during, and after the fact.

“Columbo” has hardly been alone among whodunits in relying on an audience for vital complicity; the motion picture and television industries have been obligated to that relationship for generations. More than once, Hollywood’s investment in star image has meant compromising the logical conclusion of a given story. Perhaps the most notorious case occurred back in the big studio era, when even Alfred Hitchcock feared making Cary Grant the murderer in Suspicion, bowing to front office pressures to re-edit the completed film so that it had a relatively happy ending and the star’s fans ended up with a relatively familiar Cary Grant.

Other performers have shied away from earning hisses with such career-first arguments as their desire to do only “positive characters” in suspense thrillers or their anxiety about doing two bad guys too close to one another. The point isn’t that just our knowledge of these priorities through gossip columns, magazine shows, and the like thwarts guessing games in the orchestra (“So why couldn’t they have stayed out of the picture altogether?”), but that we are seen as indispensable abettors of career tactics, however ruinously that function affects a given story’s intelligibility.

Another kind of image factor is at work in the abasements known as reality shows. In the interests of remaining Topic A around the water cooler the following morning, program producers will see to it that the surviving apprentice, maggot-eater, or mate-swapper will be the creep or bitch who has made the most chilling case for life not being fair and for not wanting to make it any more so. This is called many things in the trade — staying ahead of the curve, pushing the envelope, taking a day off from worrying about role models — but what it comes down to is honoring the people you most want to see in Sumatra because then they won’t be anywhere near your life.

In fact, in this cathode sea of reality show sharks and their parasites the only stations still upholding fabled honest grit as virtue are Nickelodeon, where reality is 20 years behind, the History Channel, where the program subjects all died on grainy newsreel film, and the Family Channel, in the hours before and after its transmission of the “700 Club.” As they say in sportscasting booths, again a no-brainer.

My perceptiveness has been even less remarkable in arenas outside those traditionally associated with light entertainment. Indeed, when the killing has been very literally killing, I have yet to be compensated a single time for an ability mobs of others have turned to coin. Murder trial jurors, for instance, now go directly from the reading of a verdict to some interview where they identify themselves, their career desires, and the epiphanies that prompted their vote in the jury room.

Crime scene technicians are still chalking the floors of Beverly Hills mansions when lawyers promote their firms by going on Fox to arraign and indict those taken into custody. By the time they’re finished thanking their hosts for their lynch mob discussion, the only ones who don’t know O.J. and Robert Blake did it are ex-Buffalo Bills teammates whose book deals fell through and the specially challenged descendants of Baretta’s parrot.

Knowledge of the killer’s identity has become such a presupposition for everyday affairs that pollsters spend as much time asking if we care who the villain is as soliciting views on his or her name. Whether it’s a third cousin of Osama Bin Laden or American military jailers at Guatanamo, we are assumed to be so savvy as to have already progressed to having to choose among outrage, cynicism, or some heartsick combination of the two in response to our discernment. Blank percent of us want the killer punished, blank percent of us want the culprit left alone because we’ve all been crumbs from that particular cookie at one time or another, and blank percent of us mainly want to be left alone. It is whodunit-by-plebiscite, a national game of Clue in which the pieces are maneuvered around the bored to gauge to what degree we actually are.

In recent years, Muslims have provided an important intersection in the identification of fictional and nonfictional killers. They have filled this role far more adequately than the previously invoked “Soviets,” who never really included more than a handful of leering fat men in wide cardboard military epaulets or cheap brown suits weighed down with pawn shop medals. The Soviets were never the Russians, happy people who drink vodka and dance on table tops, they were just the Soviets, enemies not to be trusted near a nuclear bomb button.

The Muslims, on the other hand, are every swarthy who ever heard of the Koran. They are so ubiquitously the killer they can be deployed effectively as red herrings. Only after they have been grilled by all the top-rated “CSI” investigators or left to rot in some Immigration cell for a few years are they pronounced not guilty. They are Anybody as Everybody, and with such odds it really doesn’t matter if they did the particular crime in question or not since they are clearly capable of similar ones.

Some of this might sound as though knowing the identity of the killer is simply a matter of recognizing what we have been told to see. So what? That’s what Sherlock Holmes meant by elementary, wasn’t it?