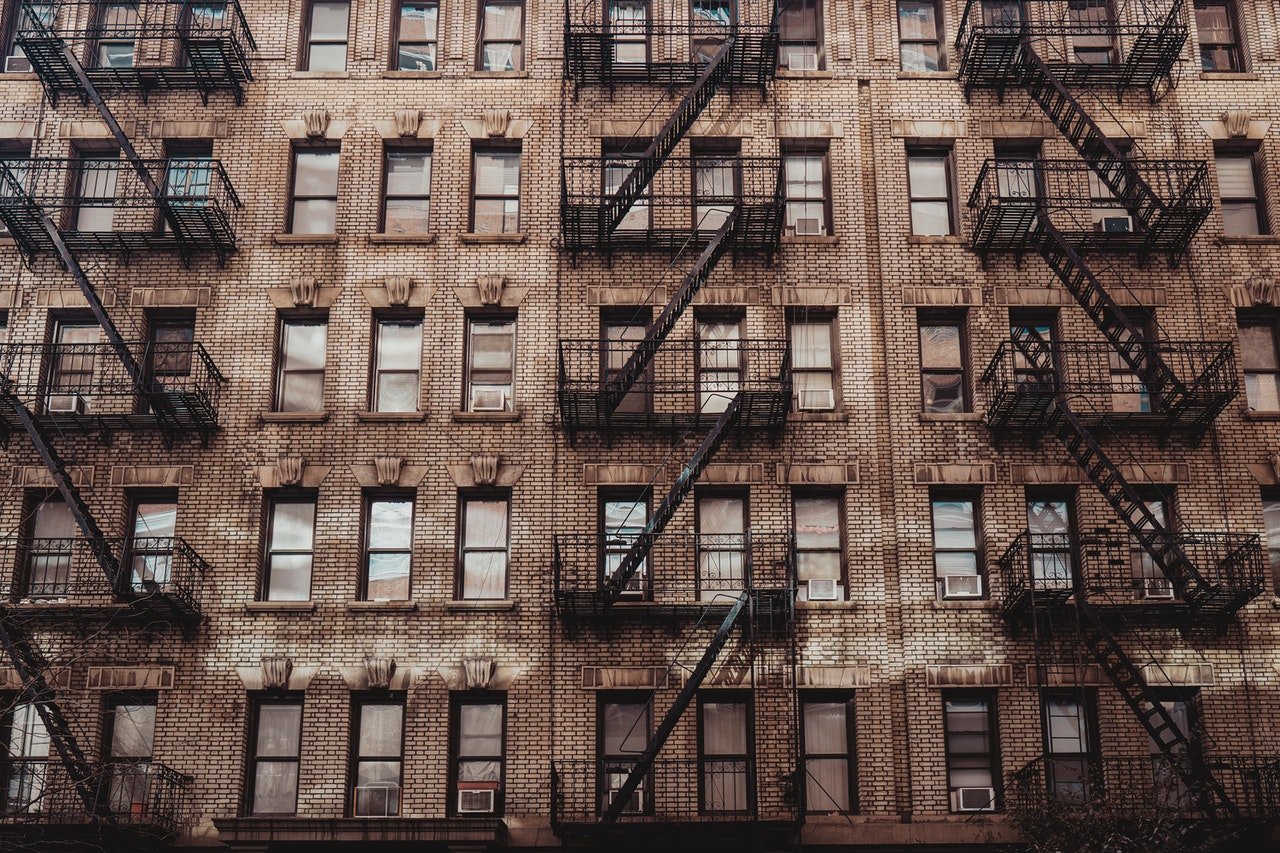 You make one final check of the apartment, though you know it’s already perfect. Gleaming china and pale pink tea roses on the table. Long white tapers, yet to be lit. The air redolent with the fragrance of slow-cooked brisket and caramelized onions–a winter dish, but his favorite.

The fire escape is ready, too. You’ve created a makeshift mattress of duvets and jewel-toned pillows to cover the irons slats. Wine glasses on a silver-plated tray wait on the bottom stair. It’s a bit cramped but cozy, romantic. He won’t be able to resist. The thought makes you surprisingly sad. You climb out the window and sit cross-legged in your miniature love nest, twirling the tassel of a pillow around your finger.

Sleeping on the fire escape was his idea. That’s what you plan to tell the police, anyway. And in a sense, it was his idea. How many times has he told you that he dragged a mattress onto the fire escape every summer when he was a boy? He’d loved sleeping in the gritty New York air, amid the sirens and shouts and the rising odor of garbage and fumes. At least there were no walls, he’d said. There was air. There was sky.

You can give him this little gift. No walls as he goes to sleep. Just the inky night sky and city noises and memories of a childhood probably far more pleasant than yours had been. You are pleased to discover this scrap of compassion in you. You’re not entirely lost.

A quick glance at your watch: three minutes after nine. He is running late.

…you really like this one. He has a kind smile and wonderful hands.

You take the syringe from your pocket and place it on the silver tray, flicking it to make it spin. It will be a clean death; fast. No worse than a heart attack. He would be devastated to know the number of less merciful options you have contemplated. To tell the truth, you even shocked yourself with your imaginings.

Because you really like this one. He has a kind smile and wonderful hands. Large and perpetually warm. Last winter, on chilly evenings in front of Netflix, you’d stretch out on the sofa with your legs across his lap, and he’d cradle your feet in those hands. When you purred with warmth, he’d glance at you and smile. You couldn’t help smiling back, something new flickering inside you. You wondered if this time would be different. Hoped.

But no, a few months in, the urges came like always. The creeping impulse to pour hydrogen peroxide in his beer. Sprinkle rat poison in his eggs. By early summer, you can scarcely embrace him without thinking about the fragility of his bones, the various ways in which they might shatter. At night, the throb of his carotid artery sounds like a drum beat. Sometimes you reach out to touch this pulse as he sleeps. Your breath goes ragged imagining the crimson flow racing beneath your fingertips, just a thin layer of skin away. On those nights, you press a pillow to your face so he cannot hear you moan.

You knew it was time to prepare for the inevitable when you realized it was no longer safe to handle knives around him. You could have cried at this. Your talent with knives translate well in the kitchen, and he is an appreciative audience. He tucks into your beef rib roast with gusto, asking discerning questions about the spices, cooking times. In all your years, you have never met a man like him. So, why? Why? Why? Why? You have no answers.

It’s quarter after nine now and he still isn’t here. This is unlike him. You hear a distant siren and a wild hope sparks. Maybe he’s been hit by a car. Maybe he’s in the hospital. Or maybe some inner alarm has finally sounded and he’s staying the hell away. And then this extraordinary thought emerges: Maybe this is a sign for you to save him.

Your mouth drops open at the simplicity of the idea. You could just go–leave the city. Pick a new identity like a new dress. Lord knows you’re used to moving on quickly. This could change everything. You aren’t so naïve as to believe that there will be no further urges. No more men. But this man–this one man with the large warm hands will live on. He will be your little gift to the world.

Your mouth drops open at the simplicity of the idea. You could just go–leave the city.

Galvanized, you slip back inside the apartment and whirl through the bedroom, throwing clothes, identification, cash, jewelry into a canvas bag. You will leave right now. If he does come, you don’t want to be here.

You’ve just zipped the bag when the doorbell rings. You freeze, then sling the bag over your shoulder. The fire escape. You ease out of the bedroom and head toward the window.

The doorbell rings again, longer and accompanied by knocking. He calls your name.

You pause, eyes flitting to the romantic set up outside. For a second, you can almost envision it–you and he, sipping wine on warm summer nights, curling together on the ersatz mattress, listening to the music of the city until you drift off. But then you spot the syringe, jarring and incongruous, on the silver tray. A different vision comes, one that leaves you shuddering with need.

The bag falls from your shoulder. You nip out the window and put the syringe into your pocket. Then you walk to the front door and open it.

He’s standing there with a bouquet of pink and lavender clematis, your favorite.

He is, of course. You are too. But you just smile and put your arms around him, careful not to crush the flowers. When he kisses you, the whoosh of his heart, his rushing blood, roars in your ears. It sounds so powerful, so strong–but you know that it is not.