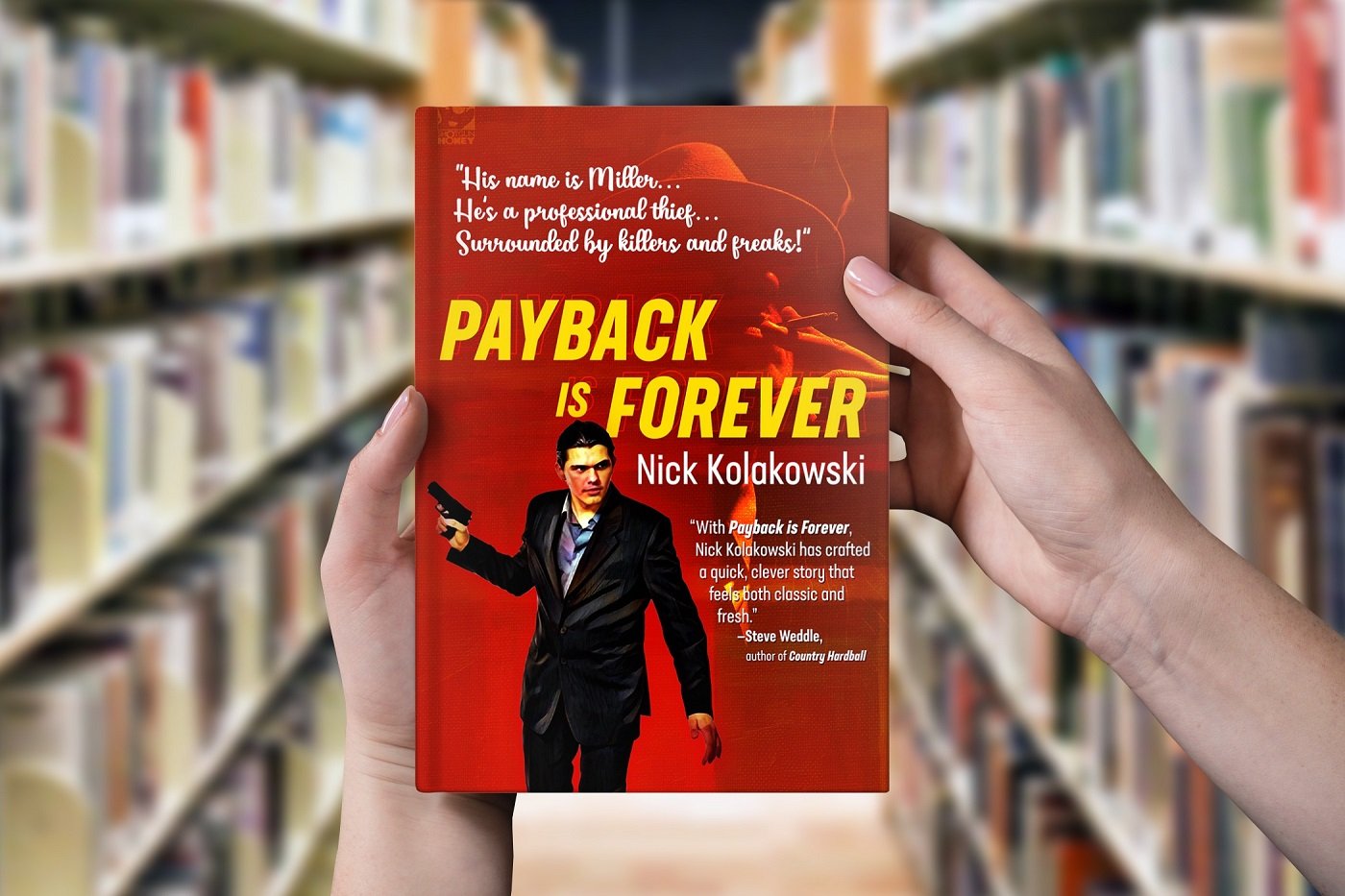 Payback Is Forever is the new hard-boiled thriller by Nick Kolakowski featuring a professional thief named Miller. It has a fast-paced, nail-biting plot and is a must-read for die-hard crime readers.

Miller thought it was the perfect heist: Five minutes to hit the cash room of an amusement park, then another two minutes to the getaway car, then gone. As a professional thief, he’d done jobs like that dozens of times. But Miller’s partners had other ideas.

When things go bad and bloody, Miller is forced to flee back to familiar territory: New York City’s West Village, where even the target of a nationwide manhunt can hide out amidst the freaks.

But Miller’s refuge might prove even more dangerous. Approached by an old friend about a shady protection job, Miller finds himself thrown into a bizarre world of pint-sized gangsters, aging war criminals, and shady government agents… all of whom are pursuing a prize beyond imagination.

What follows is a excerpt from the book:

While the shootout paused so everybody could reload, Miller wondered whether the clown was still alive.

Payback Is Forever has a fast-paced, nail-biting plot and is a must-read for die-hard crime readers.

But the security guard had decided his employer’s profits were worth dying for, and so Miller found himself crouching behind a dumpster as the uniformed idiot knelt to shoot at him from twenty feet away. Bullets smacked the dumpster’s side with gonglike booms. From the Whack-a-Mole booth to his left, Bernard and Trent—up until two minutes ago, his partners in this little entrepreneurial endeavor—did their best to fill him and the security guard with lead. The clown lay in the crossfire, his oversized feet twitching.

If he made it out of this alive, Miller vowed to never rob an amusement park again.

When the firing stopped, Miller reloaded his .45 automatic. Bernard had a 9mm, which would have been worrisome if he could aim, but Trent’s pump-action shotgun was the real problem. The shotgun would put Miller down if he broke into the open at the wrong moment. While Miller could use the screaming crowd as cover, he preferred if a family wasn’t gunned down on his account.

Bernard had a 9mm, which would have been worrisome if he could aim, but Trent’s pump-action shotgun was the real problem.

Sirens in the distance meant Miller needed to end this soon. He knelt and stuck his gun under the dumpster, sighted on a khaki-clad leg, and pulled the trigger twice. The guard’s knee shattered and he fell onto his face. If this had been France, Miller would have followed that up with a shot to the top of the kid’s head, but he was no longer a soldier.

Hoisting the duffel bag full of cash onto his shoulder, Miller sprinted down the concourse, dodging left to put the Ring Toss O’ Rama between him and any incoming bullets. Bernard fired anyway, the round cracking into wood. Trent’s shotgun boomed, hitting nothing.

They expected him to head for the black sedan parked in the back lot, the same one they’d driven here, but Miller had other ideas. He ducked left again, down the concourse with kiddie rides on either side, firing twice in the air to clear the panicking civilians, hoping none of them would decide to play hero by leaping at him. He angled for the outer fence where he cut a hole a few days ago, and the green Buick parked in the weeds beyond. He was going to get away clean—but damn if he wouldn’t feel bad about that clown.

If you’ve enjoyed the excerpt for “Payback Is Forever”, you can check out the book excerpts for other notable crime and thriller titles here.