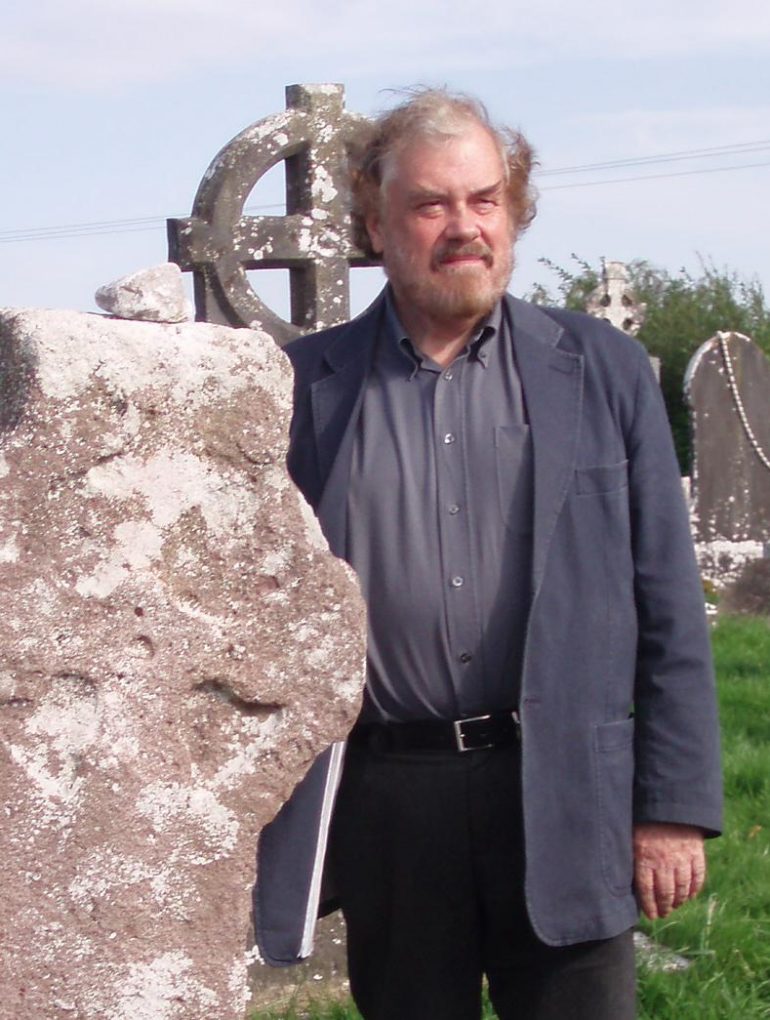 A Q&A With The Best Selling Author Peter Tremayne

Peter Berresford Ellis (born 10 March 1943 in Coventry) is a historian, literary biographer, and novelist who has published over 90 books to date either under his own name or his pseudonyms Peter Tremayne and Peter MacAlan. He has also published 95 short stories. Under Peter Tremayne, he is the author of the Sister Fidelma mystery series. His work has appeared in 25 languages.

We recently reviewed his new novel “The Chalice of Blood

” (read the review here) and what comes next is our conversation with the author about the new book, his novels and his inspirations in general.

Tell us a little about your work and novels.

The Sister Fidelma Mysteries are set mainly in 7th Century Ireland and Fidelma, as well as being sister to an Irish provincial king, is a trained lawyer of the ancient Irish law system, the Brehon Laws. Her companion in solving crime is Brother Eadulf, an Anglo-Saxon religieux, who she met during the famous debate on the merits of the Celtic and Roman churches at Whitby (AD 664). Eadulf, like many Anglo-Saxon religieux of the time had studied in Ireland.

Since the first stories appeared in 1993, there are now 23 titles published (in the UK), including two volumes of short stories. They have appeared in 18 languages, been dramatised on German radio, issued as audio books in English (UK) and German, and will soon be appearing as graphic novels. (They were, for some years, optioned for filming but my agents decided not to renew the option).

An International Sister Fidelma Society was launched in 2001 with headquarters in the USA but with a world-wide membership. The Society runs not only a website (www.sisterfidelma.com) but since January 2002 has issued a 20 page magazine, The Brehon, devoted to the books. Since 2006 there is a biannual three-day gathering of the international enthusiasts for the series called the Féile Fidelma held in Cashel. Co. Tipperary, Ireland, which is the ancient town that is the central location of the stories In fact, the town boasts a Sister Fidelma Guest House (Bruden Fidelma) (www.sisteridelmabandb.com) with rooms named after the mains characters. It acts as the Society centre in Ireland.

How do you research your books

My degrees are in Celtic Studies and I have written many non-fiction works on the ancient Celts as well as Irish history under my own name.  However, I also enjoy writing fiction as Peter Tremayne. In the late 1980s I was lecturing at St Michael’s College, University of Toronto, in Canada, on the subject of the ancient Irish law system (Brehon Law); the social position of women in ancient Ireland and the conflict between the Irish (Celtic) churches and Rome. One of my students said that it would make a good background for a mystery novel.

It was not until 1993 that I wrote and had published some short stories featuring Sister Fidelma as my 7th Century sleuth. On the strength of these published stories, Headline Books of London asked me to develop the character for full-length novels. The first book Absolution By Murder, set against the Synod of Whitby, was published in 1994 and the rest, as they say, is history,

As for research, my background in Celtic Studies provides a good basis. I always tend to look for my ideas among the ancient Irish law texts, the Irish Chronicles and Annals. I tend to use a lot of historical characters and events as given in these sources. For example, in Dancing With Demons, the murder of the High King actually did take place as described.

What was most challenging about writing ‘Chalice of Blood’?

This one presented challenges in that I was dealing with early anti-Christian writers and texts that many might perceive as highly controversial in a Christian context.  They exist. In my story, I am not judging whether they are right or wrong, only that they have an affect on a character in the story from which all else follows. I was surprised that no outraged person has condemned the novel, so perhaps everyone understood the context of the material I was handling.

Where do you usually write?

I have a study in my house in London, England, which is jamb-pack with my library. That is my ‘Tardis’, where I travel back to 7th Century Ireland. I can say there is no part of Ireland, my father’s country, that I am not personally unacquainted with. My wife and I are regular visitors. My paternal family is a Cork one, and therefore the province of Munster (Cork, Kerry, Limerick, Tipperary and Waterford) is deep in my psyche.  This is why Fidelma is sister to an historical King of Munster (Colgú, who reigned in the mid 7th Century).  So although I write in my study, I just have to sit back in my chair and Munster comes to me. Also, I have an extensive library, including a large collection of work on ancient Irish law. It is amusing that some readers still write in to enquire if I am actually making up the ancient Irish laws to suit the story.  Every law I quote, and which Fidelma has to abide by, is there in the texts.

Who is your favourite writer?

An impossible to answer question. It’s too subjective.

The old adage is that writing is one per cent inspiration and ninety-nine per cent perspiration. I agree. The times young hopefuls have come up to me and said ‘I would like to be a writer – how should I start’.  They seem hurt when I tell them to get a blank paper and pencil and start writing. The fact is that if you really want to write, you don’t hang around for the muse, Sit and face that blank paper and start filling it. At the end of the day, even if it is all gobble-de-gook, you might find you have put down an idea that is worth saving.

I am just finishing the 24th Fidelma novel which is due out in the UK next year.  The US editions tend to be a year behind.

Like books by Peter Tremayne? Check out the following titles.