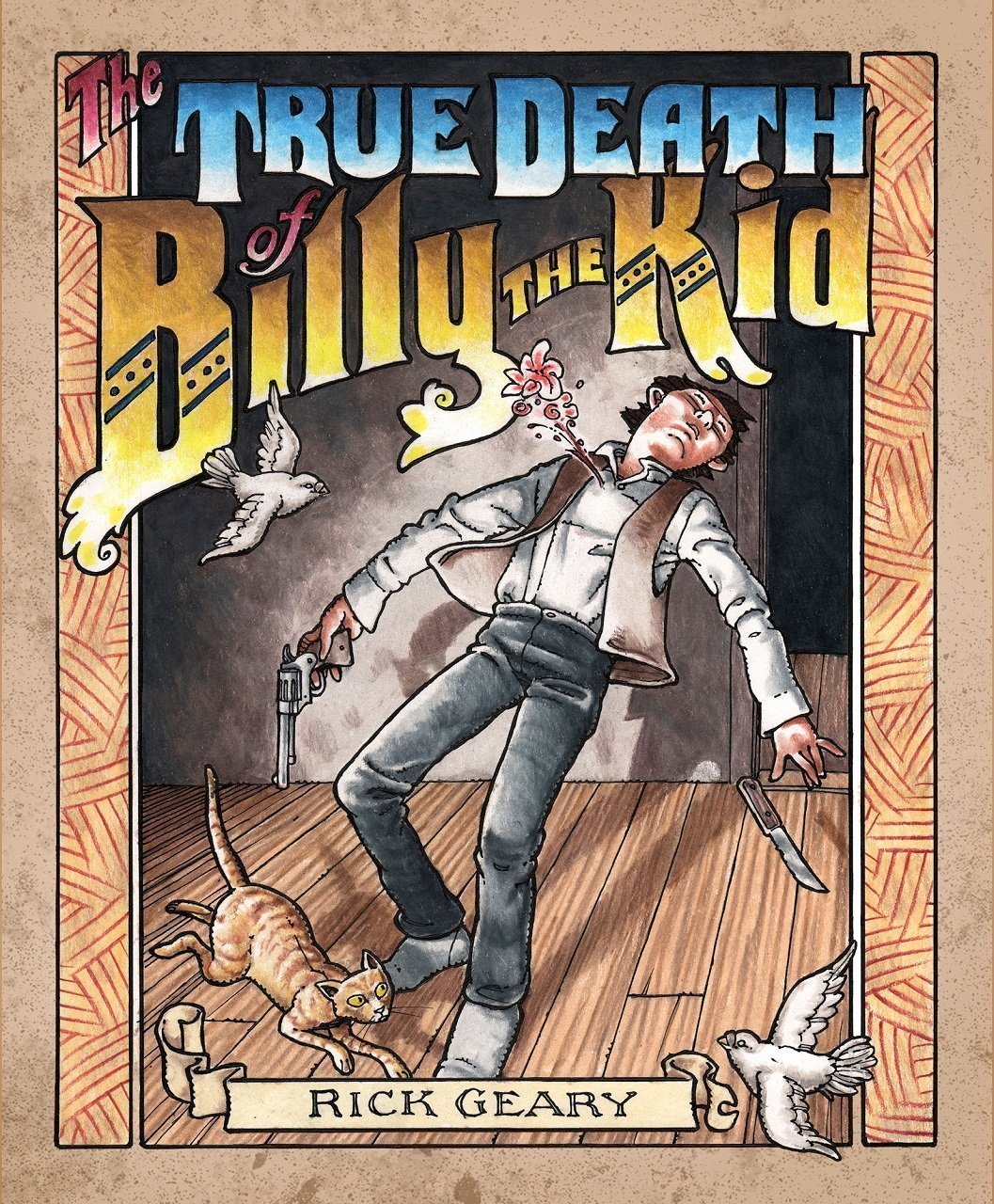 After about 30 years in San Diego, the American cartoonist and illustrator Rick Geary and his wife decided to move to Carrizozo, a tiny town in the middle of New Mexico.

Carrizozo is an isolated but very artsy place and full of creative minds. Though Rick is somewhat past an average person’s retirement age, he still keeps a full schedule: His work typically includes illustration assignments of various types and personal projects, as well as art events around town. As he puts it “I have an ideal studio space in our home and keep to my drawing table for much of every day.”

Rick Geary is no stranger to heartland America. He was born on February 25, 1946 in Kansas City, Missouri. Geary was initially introduced to comics readers with his contributions to the Heavy Metal and National Lampoon magazines.

His cartooning work evolved from his early imitations of Edward Gorey into a distinctive drawing style which typically consists of stark clean black lines against a white background, with a total absence of half-tone or shading.

Even more distinctive is Geary’s method of panel art. Most comics artists will draw several consecutive sequential panels of the same characters in the same setting. Geary, uniquely, almost never devotes two consecutive panels to the same locale or character. This creates a constant impression of jumping from one image to another.

Geary has drawn a variety of solo comic books and graphic novels for various publishers, including adaptations of Great Expectations, The Invisible Man and Wuthering Heights for the revived Classics Illustrated series and a kid-oriented Flaming Carrot spinoff.

His most extensive project is his ongoing non-fiction comic book series, A Treasury of Victorian Murder, published by NBM Publishing. The series chronicles such 19th century criminals as H. H. Holmes, Lizzie Borden, Charles Guiteau and Jack the Ripper. In the series, he often uses literary devices characteristic of 19th century popular literature. For example, The Borden Tragedy is narrated through excerpts of a period diary, and The Fatal Bullet didactically contrasts the lives and morality of Guiteau and his victim, President James Garfield.

The National Cartoonist Society awarded Geary its Magazine and Book Illustration Award in 1994 and its Graphic Novel award in 2017.

One of the latest ventures by Rick Geary is the new graphic novel “The True Death Of Billy The Kid” which brings his inimitable tongue-in-cheekiness to the story of one of the national folk heroes of the truly Wild West.

Billy The Kid is a particularly interesting figure for a graphic novel thanks to his complex character: On one side, he was quick with the gun, especially against lawmen, on another he was quite charming and engagingly colorful, which made him a lady’s man.

While Geary focuses mostly on how The Kid was finally gunned down, most desperately by lawmen forever frustrated in catching him and even more challenged in keeping him caught, the story does cover his lifetime from an everyday cowboy to completely living on the other side of the law. He wasn’t just flouting the law, he was shooting umpteen bullet holes in it and its keepers without a shade of hesitation or remorse.

To the downtrodden, and that included the Spanish speaking denizens of a New Mexico yet to become even a state, he became a symbol of standing up to authority and well, its potential -and real- repression. He became an anti-hero, as outgoing and fun-loving as he could be with regular folk, as crazily heroic and defiant he was to the law, was as popular he became.

His feats of derring-do not letting himself be caught for long, thumbing his nose at and making the authorities look ridiculous, certainly fueled the legend.

Geary launched this novel through a successful Kickstarter campaign through which he finalized the graphic novel and printed a limited set of copies for Kickstarter backers.

Now available to a broader audience, this book is a welcome addition to Geary’s now legendary library of over 20 Treasury volumes and compilations.

The following is a conversation with the author on “The True Death Of Billy The Kid” and Geary’s current and future projects:

A Treasury of Victorian Murder has obviously been a successful series and now with the “Treasury of XXth Century Murder”, we already have 7+ books in the market. Is there an end in sight?

At the moment, I’m taking a little break from the Treasury series to concentrate on books on broader historical subjects, like Billy the Kid and its follow up, the Story of the Lincoln County War, and other self-published projects funded on Kickstarter.

With the exception of a one-page summary, you have focused most of your attention in this title on the last days of Billy the Kid. Why?

After moving to Lincoln County, I became aware of how important a figure Billy is around here.  His image is guarded jealously.  No one, to my knowledge, had ever produced a non-fiction comic that told his story as accurately as possible. I didn’t want to do a sweeping biography and felt I could get in more detail by concentrating on a specific period: the last two months of his life, during which he became a national legend.

In this book, from historical perspective, we can clearly see that perhaps Billy the Kid was a lost young soul who crossed a path of no return. There are however, competing versions on who he was. Do you see him a hero or an evil criminal?

Like the proverbial elephant, getting a full picture of the Kid depends on who you talk to.  I imagine that like most people he wasn’t all of any one thing.  He was certainly an outlaw, having grown up wild and living by his wits in a hostile environment, but his reputation as a remorseless killer is certainly inflated.

I believe he was no more or less corrupt than any of the other men operating in that place and at that time.  The territory was a center of conflict among competing economic interests, and few were truly innocent.

You originally financed development of this story via a Kickstarter campaign. How was your experience? Was this because it is hard to get support for “True Crime” comics or historical titles?

I’ve completed five projects, thus far, via Kickstarter and each one was successful. The first book was kind of an experiment just to see how well the process would work.  Now it has become a yearly thing.

More than anything, I appreciate the independence of self-publishing.  And, as in the case of Billy the Kid, there’s always the chance that a mainstream publisher will take up a book for reprinting and distribution.

Do you yourself read comics? What comics are you reading and enjoying right now?

Actually, and I usually hate to admit this, I’ve never been a big comic fan, and don’t really read them regularly. There are several artists, though, whose work I admire.

What projects are you working on now?

I hope to have a new book up on Kickstarter soon.  Don’t want to say much about it, but it’s another murder tale, but this time in color.

Like Books By Rick Geary? Check out the following titles.