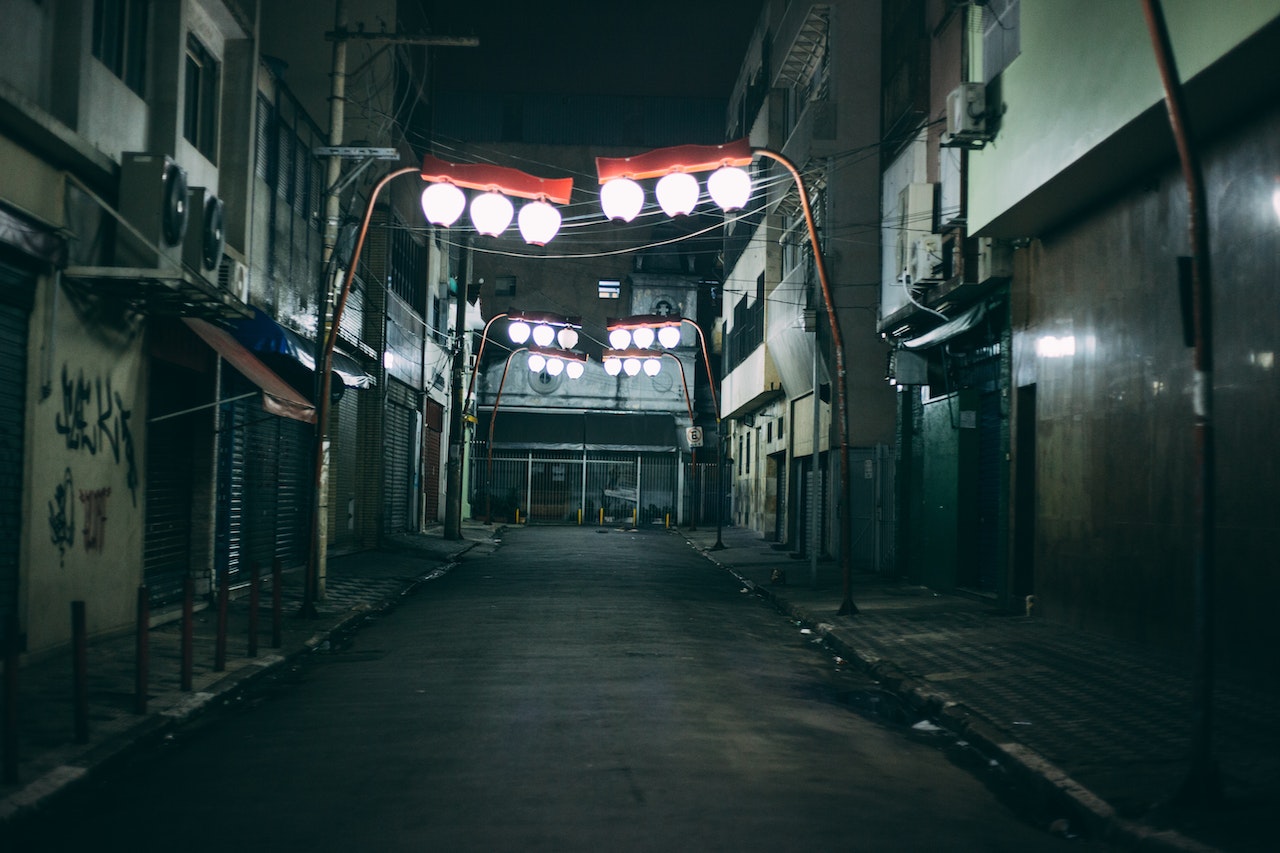 Lex Snowe, author “Rendezvous”, is a full-time writer of genre fiction and screenplays and divides her time between Paris and Los Angeles. She is currently working on her debut novel.

It’s midnight, the California fall crisp at this hour, especially out in these lonely places. Grit is popping under the wheels of his rental car as it advances up a gravel track. There are trees either side, wild and looming, and a shuddering glint ahead where the moonlight is catching on water. You might think this place a lovers’ lane, were it not so eerily unpopular. It’s the perfect visual, he thinks, for the way the two of them have loved: bleakly, overall. Beautiful only at times and in places they alone will see.

The rental rounds a corner and another car comes into view, parked where the gravel track becomes a turning circle. A tired red Camaro convertible with its top up. He pulls up by it. Not immediately alongside, but about a car’s width away.

He kills his engine and headlights, sits quietly, looking across at the Camaro. No lights are on inside. No way to tell if anyone is there, waiting for him to make the first move. He sits a little longer, squeezing the steering wheel, weighing his surroundings. Then he opens his door.

He kills his engine and headlights, sits quietly, looking across at the Camaro. No lights are on inside.

He’s crossing to the Camaro now, raising the collar of his jacket against the breeze. Tired jeans, boots that have certainly walked some… he’s nothing much to look at. But there’s a honed tautness in his thirtysomething frame noticeable to a lingering eye. Not wanting such an eye on him, he favors this clothing.

As he comes within arm’s length of the Camaro, its windows throw back his reflection. Beyond it, he sees the car is empty. An overnight bag on the passenger seat, overstuffed despite his warning that dramatic packing might give away their plans. Her passport pinned underneath it.

The man revolves slowly, taking in the forest around him. His hand going to the back of his jeans where his untucked shirt doesn’t quite conceal what he wedged there before turning onto the gravel track. His hand relaxes and moves away again as he sees: her silhouette in a clearing between trees. Some fifty meters away, waving to him. She’s on an overlook by the lake, the water directly behind her, wriggling under the occasional touch of starlight. A tiny red glow flares as it goes close to her face then falls away again. In the lap of spectral natural beauty, she’s smoking. Of course.

She beckons him to come see the view. She may be calling too, but he doesn’t hear. He’s listening to everything else. The wind murmuring through the trees. The daylight introverts of the animal kingdom hissing, snapping and snickering in the darkness now that it’s their time. His own engine, clacking as it cools.

He sets out toward her. There’s no official path to the clearing, but the grass remains broken from her way through. He traces her steps. He still can’t make out her eyes. The red glow should have risen again by now, illuminated her face, but it doesn’t. She has forgotten about smoking.

That’s when he knows. Enough, at least, to be more ready than he otherwise would, when the crack of a gun sounds from somewhere in the trees on his right.

He hurls himself to the grass. That first shot goes somewhere else, but others soon follow. He gets scrambling through the grass toward the trees on his left. Very soon, way too soon, he is reduced to a writhing belly-crawl by a thicket with no obvious way through it. His motion must travel up the thicket and advertise his position, because the shots, until now wide-ranging guesswork, take on new precision. A bullet obliterates the earth inches from his head, leaves a crater the size of a coconut. Then his back takes the fist of God, halfway up his spine. He’s hit.

His lungs are knocked out of action by the impact, even before a second shot lands – his back again, a little higher. Somewhere inside himself, in that stretched moment without oxygen, he makes eye contact with death.

He’s not ready to go. He fumbles at the gun pinned in back of his waistline. Just as he gets it in his hand, a third shot ploughs clean through his shoulder. The spatter wets his face, pastes grit to his skin as now he presses himself hard into the ground, praying his head is spared.

The shots move on beyond him. His gun is no longer in his hand, and he finds he can’t move his arm to retrieve it. The pain is enough to have him think maybe death wouldn’t be so bad, after all.

Another thought soon chases that one out. Not my legs.

If his legs are hit, he can’t run, and if he can’t run, it’s over. Dying would go from wistful contemplation to absolute certainty. Before the gunfire can advance to other parts of his body, he pushes through the fog in his mind and curls up his legs into his chest.

The gunfire stops. The shooter reloading, repositioning, or just teasing. The wounded man, and his legs that are still intact for now, don’t stick around to find out.

He abandons his gun, after a quick sweep with his other hand fails to find it. He forgets about trying to get through the thicket too. He scrabbles along by it instead, towards the water, propelling himself forward on his knees and his one good hand, guided by the moonlight jabbing through the canopy. Sucking in breaths through the squeezing pain of collapsed ribs.

He gets to the first of the fir trees and the cool of the forest falls over him like a cotton sheet. The resumption of gunfire behind him, closer than before, reminds him that’ll be the sheet they put over him in the morgue if he doesn’t keep moving. The obstruction of the thicket finally ends, and now he’s free to lunge upright behind the trees. He almost loses his feet again as he does, his legs stiff with the pinching lactic acid of thwarted flight, and his head light with blood loss.

He sees that the trees in one direction stand closer and closer together. Better cover, so that’s the direction he chooses. Running. Running that’s more like hurling himself forward and hoping for the best. The gun shots follow, but raggedly and often wide, with the trees here taking the bullets with a soft sputter. Sounds of the gunman follow too: footsteps stumping over the forest floor: rough, imprecise, but fast. Wet breaths with an edge of hoarseness. The breathing of a man who doesn’t ordinarily run, running right now on rage.

The wounded man looks back, glimpses the shoulders on the tall frame, shoulders built for ramming and heaving. The nose that looks broken but isn’t, a false advertisement of damage. The wounded man knows this, from her stories: few encounters leave the shooter damaged. If he doesn’t have all the advantages, he’s not there in the first place. Her husband. You don’t need his name, she’d said, And I don’t want it.

He’d found it out easily enough, though, as she probably figured he would. (He didn’t operate on young wives’ tales any more than he did on old wives’.) All that she told him held up. The badge on her husband: LAPD Gangs and Narcotics. His profit participation in the fourth-fifths of trade he let happen for every one-fifth he busted. How she knew where he kept that money, and could bring it someplace – all of it, because the rage would be the same whether they took a thin slice or the whole lot, the taking at all was enough.

Now the husband is some seven trees behind. A few glances later, five trees behind. His shots still hopeful more than strategic, but by smaller margins.

And the wounded man sees what he must do.

He pivots toward the water.

There’s no safety fence or warning sign by it, because this is private land in an area of natural beauty not thought to interest hedonists and fools. In approach to the water, the trees crowd a little tighter, as though there’s something to see down there. Then they stop abruptly, and a few strides of bared rock is all that remains of solid land.

New intensity in the gunshots suggests the wounded man’s plan is now understood by the both of them… even if he has not yet quite understood it himself. She only gave him directions to this place, not satellite maps and soil samples. He has no idea what’s beyond those few strides of bared rock.

But his very firm sense of what’s behind him has him full-tilt sprinting at it all the same.

As he bursts out from the forest darkness, the moonlight comes at his eyes like an ill-timed hallelujah. Because by that moonlight he sees it’s a thirty-foot plunge from here to water that could merely be a tablecloth over rocks, for all he can make out.

For the first time in his life, he sees he may have no one to say goodbye to. Wordless goodbye, the plane’s going down and I’m pretty sure I’m done, goodbye. There was no time for him to register whether she’d screamed when the gunfire started, the scream that cannot be faked, like someone reaching into your throat and wrenching out your soul. The way he’d once seen a mother scream when her child was struck on a crosswalk.

All he knows is that she hadn’t been willing to show him her eyes. That reluctance, seconds before the man she promised hadn’t gotten wise to their plans puts bullets in him. And he’d known, hadn’t he? Even before she couldn’t look at him. There was the overstuffed bag that hinted she hadn’t packed in earnest, in true fear of discovery. There was the feeling he’d had, before he’d made the drive up here, as he was choosing his weaponry. He’d picked an old Ruger there was a trick to firing, so that if it got into her hand somehow, it was merely an ornament. He’d seen her in a corner before, pumped with self-preservation. Running away with all that money, they couldn’t rule out corners, no matter how many times she said the husband wouldn’t risk exposing his own corruption by giving chase.

The wounded man is going hard at the water now. If graced with a continuation, he’ll get it all straight, exactly what happened here tonight. But for now, he makes peace with it: she fucked up, or she fucked him, and now it’s back to how it all began, how perhaps it was always going to end, no matter what his choices. Him, and the elements, both coded for survival, only one of them dumb enough to think he could do that other than alone.

Maybe if he’d seen her eyes or heard her scream, he could be sure she deserves his final goodbye.

He says it anyway, and leaps.