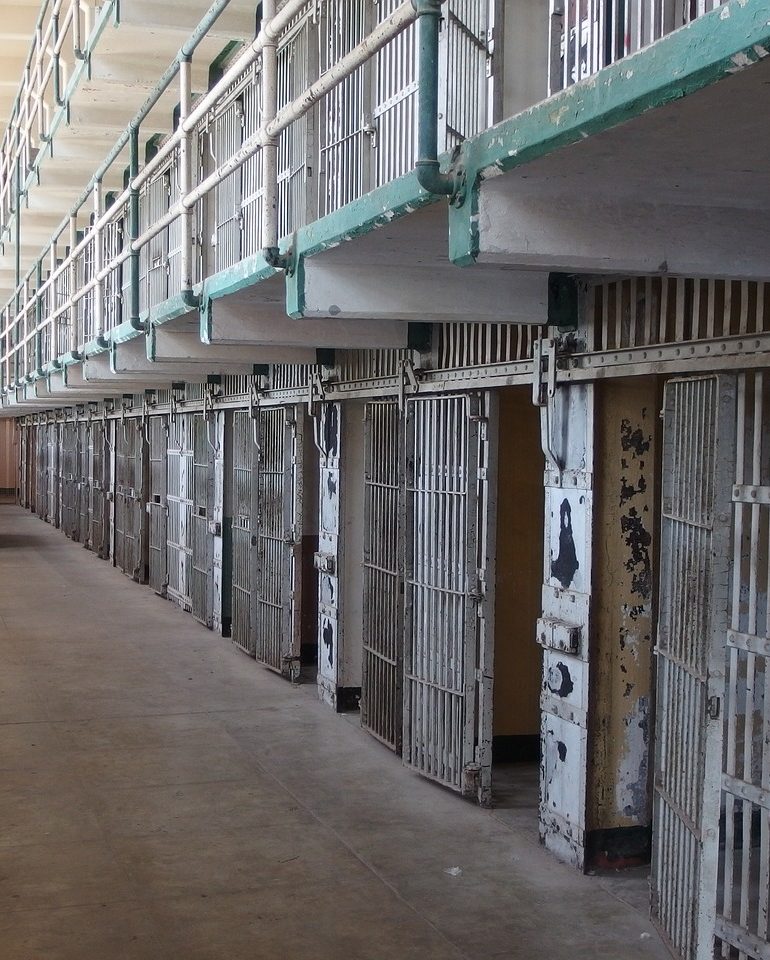 Brooks C. Mendell, author of Short Books for My Cellmate, writes and works in forestry near Athens, Georgia. His stories have appeared in venues such as Storgy, Spank the Carp and Mystery Tribune

Lewis found short stories unsatisfying. He preferred novels and biographies, and the deeper satisfaction he felt after reading the final page of a full-length book. Once the guards killed the lights at night, he’d celebrate a finished book by dropping it from his bunk above so it landed flat with a solid thwap on the concrete floor.

My first night in his cell, A Wrinkle in Time by Madeleine L’Engle sent me to the infirmary. The unexpected swoosh of the falling book and the snap of it smacking the floor jerked me upright from dreaming. I banged my forehead on the edge of the upper bunk and bled all over my scrubs.

“Oh sure,” I said, pressing the heel of my hand against the open gash. “That happen often?”

I remember how Lewis, after a pause, slid down off the upper bunk and said, “Let me take a look before the doctor sews you up. I’m gentler than he is.”

“At night, I practiced tossing books without hurting them,” said Lewis. “Got so I could land one on the other, perfectly stacked.”

Lying back in my bunk, Lewis demonstrated. He held The Pearl by John Steinbeck in his right hand down by his hip. Then he flicked the book off the bunk like a Frisbee, so it rotated exactly one-and-a-half times before hitting the floor.

“The rotation keeps the book level, you see. And leading with the spine keeps it from flutterin’ open,” said Lewis after Steinbeck slapped the cement.

No matter the size of the book or his distance from the floor, Lewis got the book to rotate exactly one-and-a-half times before landing.

“Years of practice,” he said.

Lewis tried to read two or three books per week. “Gotta have goals,” he explained.

“Have you read Mein Kampf by Adolph Hitler?” I asked.

“How about Anne of Green Gables by Lucy Maud Montgomery?”

“You’re gettin’ too comfortable, bitch,” said Lewis, peering over the edge of his bunk.

“What are your favorite books?”

Sometimes, Lewis read and reread kids’ books like Superfudge by Judy Blume or Horton Hears a Who! by Dr. Seuss. In Green Eggs and Ham, someone had colored the hams red and eggs blue. “Goddam disrespectful, vandalizing books like that,” he said, throwing the book to the floor.

I learned to watch myself when Lewis heated up. Later, I found his anger over defaced books admirable. Especially for someone serving life for decapitating two neighbors and biting off the thumb of a police officer.

The details of someone’s case is their business, even if you share a cell. I chipped away slowly. However, once I understood Lewis’ rhythm, I went direct. “Why did you do it?”

“Couple next door babysat me when I was a kid,” said Lewis, staring at the ceiling. “The man fingered me while his wife read books to us out loud. She’d sit in a rocking chair facing the other way. When he was done, she’d stop reading, no matter where we were in the story.”

Lewis paused and looked over at me. “When I got big enough to handle an ice pick and crosscut saw, I closed their business. Now I read to myself. And I always finish what I start.”

To celebrate our first year together, I gave Lewis a copy of The Road by Cormac McCarthy.  He resisted the gift, the book being on the long side. I said, “It’s a powerful story about survival. A strong man taking care of a weaker one in a bleak world.”

Lewis worked the book all day. He read at breakfast and in the yard. At lunch, he sat near the guard station where the light was better. During his shift in the maintenance shop, he read in the corner instead of greasing up ball joints.

“This speaks to me,” he said after dinner. “I’m gonna finish tonight.”

“Lights in ten!” barked the guards, walking the hall and checking cells.

Then I heard Lewis flipping pages and shifting in his bunk, looking for the end of the book. “What the fuck?” he said.

Then, the buzzer sounded and the lights shut off.

One beat. No book flipped to the floor from above.

Two beats. No book and no movement.

I rolled to the floor as Lewis swung down from the upper bunk to drive a set of needle nose pliers through my pillow. I stood up behind him and clapped once. Lewis jerked up at the sound, banging the back of his head on the bunk. I caught his shadow and, in one motion, stepped in to snap his neck.

The passing of Lewis surprised others in the cell block. They heard my clap as another book striking the floor. And aggressive, rustling movements rarely shocked anyone here. Especially coming from my bunk.

The guards confirmed my story of self-defense. The pliers came from maintenance, where Lewis worked. “You’re lucky,” said the warden, handling the slashed pillow and smuggled weapon.

Standing to drop the useless pillow in the trash, the warden hardly noticed the shreds of paper, the final pages of the book Lewis never finished, mixed in with the stuffing.

If you’ve enjoyed Short Books for My Cellmate, you can visit our free digital archive of flash fiction here. Additionally, premium short fiction published by Mystery Tribune on a quarterly basis is available digitally here.