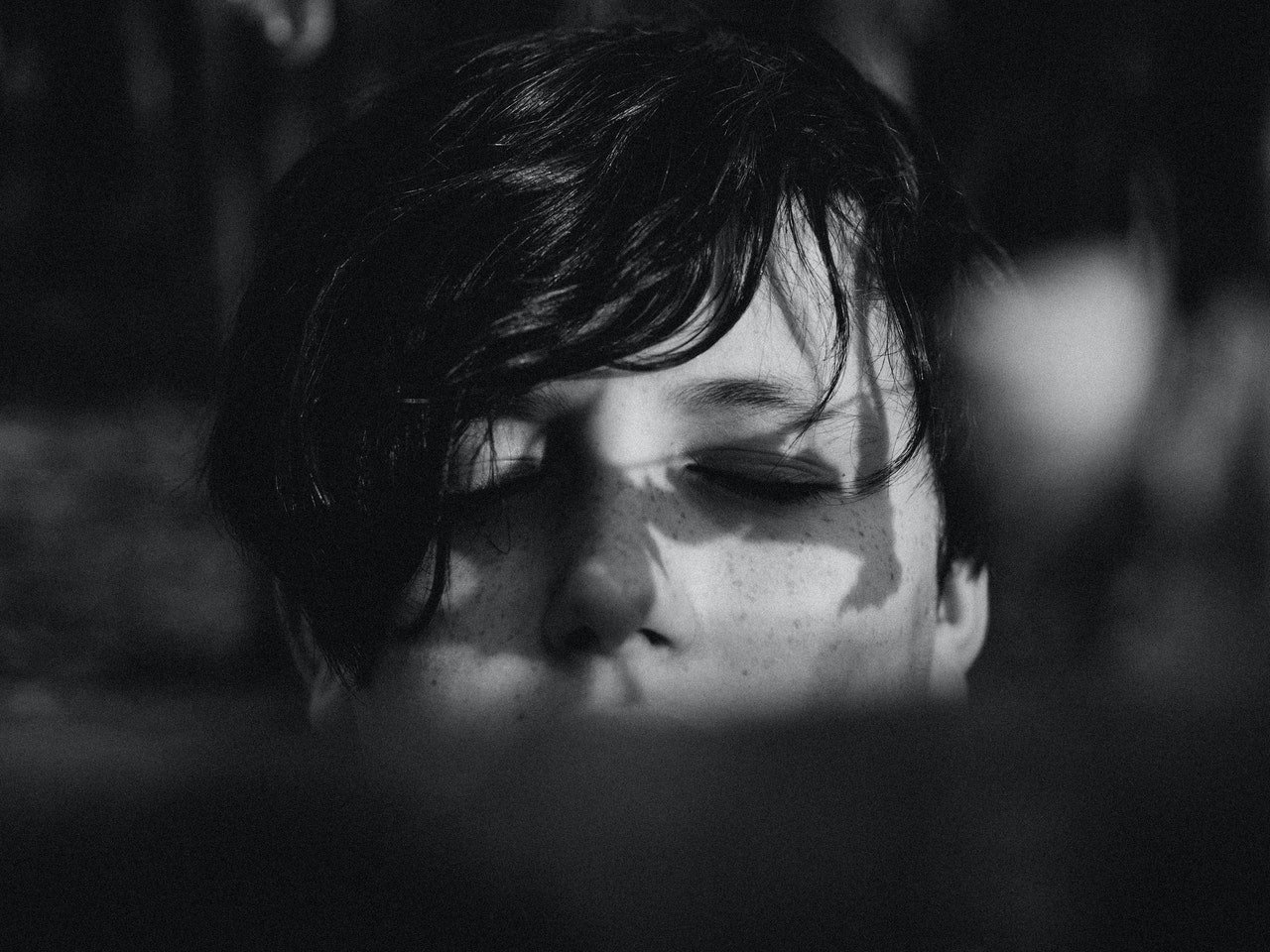 Something Terrible Has Happened: Short Fiction By Julie McClement

Julie McClement, author of Something Terrible Has Happened, graduated from Centennial College’s Children’s Media program. She grew up in midwestern Ontario but now lives in Toronto where she works as a UX Researcher.

My brother Peter and I were walking to his place, sweating through our shirts, when a man on the other side of the street called out to us.

“Yo! Pete!” the man said. He had shaggy brown hair and beat up jeans, and I could tell he was at least a little drunk.

“You know him?” I mumbled to Peter, as the man ambled towards us. Peter stiffened.

Just a guy? What did that mean? Before I could follow up, the man reached us.

“Hey, C-Lover!” he said to me, holding up his palm for a high five.

“Your necklace!” the man said gleefully, pointing at my chest. I looked down and saw my four leaf clover necklace, a silver charm on a chain. “Clover. C-Lover. Get it?”

“I need all the luck I can get,” the man said, turning his hand palms up again. He took a step closer, and I could smell booze and pot mixed together. His pale blue eyes were locked on mine, unblinking. “Don’t leave me hangin’, C-Lover.”

No way was I hugging him. The second you touched men, they’d pull you into a bear hug or give you a sloppy cheek kiss and would claim you were repressed if you protested. Men were gross.

“I’m a germaphobe,” I said. “It’s nothing personal. You know my brother Peter?”

“I need all the luck I can get,” the man said, turning his hand palms up again. He took a step closer, and I could smell booze and pot mixed together.

The man turned to my brother. Peter still wasn’t saying anything, his eyes trained on the ground. The man tapped him on the shoulder, so hard he stumbled back a little.

“Pete the numbers guy,” said the man, slurring a little. “Man with a plan. Big brain.”

Peter stayed silent, so I figured I was in charge of ending things.

“We really have to get going. Nice to meet you.”

Peter and I walked away fast, Peter looking straight ahead. Once the drunk was far enough behind us, I spoke.

If Peter was doing drugs, I was definitely going to freak out, but only on the inside, till I could come up with a strategy.

“No, no,” said Peter, suddenly talking fast. “That was my coworker, Sam. He’s an admissions officer. He seemed professional at first, but it turns out he’s a talker. Talks way too much.”

Peter was a clerk in the financial aid and awards office. “Oh,” I said. “And are you … friends?”

“No!” said Peter, so loudly I flinched. Peter looked apologetic.

“Okay, sure,” I said. I wasn’t sure where the tension was coming from. “You should definitely avoid him. I feel like he’s going to get caught smoking marijuana in the dean’s office, and you don’t want to get involved in the fallout. You’re doing so well.”

He was, too. His house was proof enough of that. It was three stories, with rose bushes out front and a pool in the backyard. I’d been startled when he’d bought it, because I’d assumed working in chemistry paid better, and I still rented. I guess university jobs are even cushier than I thought.

“Don’t talk about work,” said Peter. “That place is a scam.”

“It’s paying your salary,” I said.

“After sucking me dry,” said Peter. “They charge ridiculous tuition fees because they can, promising a good career. Now I’m doing a job a chimp could do. It’s a scam.”

“I’m not telling you to love the place,” I said, sighing. “Just don’t sabotage yourself by spending time with a loser.”

“I don’t need your advice,” Peter said. “I know how life works. Some people act; others are acted upon. I’ve decided which I am. Maybe you should take some notes.”

I was stung. Peter was the only person I’d ever really loved, the only person who respected and valued me the way I deserved. Lately he’d been pushing me away and I couldn’t understand it.

For a moment, every submerged question was almost on my lips. Why have you changed? I wanted to ask. Are you really able to afford how you’re living on a clerk’s salary? I’d trained as a journalist before I turned to chemistry, and I knew I could break him. My words could set off a chain reaction like the ones in my test tube, dissolving everything in their path.

Peter’s face was apprehensive. Don’t push this, it silently pled. I could never resist giving my brother what he wanted.

By the time I sank under the water, Sam the drunk was forgotten.

A month later, I was walking down that very same street, headed to Peter’s to retrieve my necklace. I’d taken it off before swimming, afraid the chlorine would turn it green. When I’d called Peter up to say I was coming to get it, he’d seemed stressed, saying he’d find it and bring it to me. I told him I was already on my way and hung up. I’m not the kind of woman who takes no for an answer.

As I rounded the corner, I saw the face of someone familiar on a flier stuck to a telephone pole: Sam. The dirtbag who called me C-Lover.

HELP FIND ME appeared in big letters above a picture of Sam in a cap and gown. I stepped closer and read on. Sam had last been seen two days ago on the corner of George and Church Streets, two blocks away. His family was offering a two thousand dollar reward for information.

I fought back unease. Sam was no doubt sleeping off a hangover somewhere, blithely unconcerned about the possibility of anyone worrying. Still, I pulled out my phone and searched for ‘Sam missing George Church Waterloo.’

A news story came up with an image of a somber middle aged woman, holding Sam’s photo.

“Something terrible has happened,” Sam’s mother said. “Sam had a Breaking Bad DVD due at the library the day he went missing, but didn’t return it. That proves he was kidnapped. Sam is very responsible.”

Sam was a drunk and a druggie. Maybe he was even into the hard stuff. Even if something terrible had happened to Sam, there was no reason to think it would happen to me. Despite this, as I walked down the suburban streets, I kept glancing around me until I reached Peter’s house.

Peter said the necklace was nowhere to be found, but I insisted on checking the living room, a large, sunlit space overlooking the backyard.

“You must have left it somewhere else,” Peter said. “I already looked everywhere.”

“No, it’s here,” I said, picking the necklace up from under a pile of mail. “Sorry about this.”

I was turning to leave the room when I caught sight of the pool, its cover drawn.

“Summer’s almost over,” said Peter. He swallowed. “It’s over.”

I looked down to buy myself some time to respond, and on the table I saw something unexpected: a DVD sleeve for Breaking Bad. WATERLOO PUBLIC LIBRARY was printed on its side.

I breathed, trying to steady myself. Breaking Bad was a popular show. Waterloo Public Library must have dozens of copies checked out every day of the year. There was nothing weird about this.

Though everything was fine and nothing was weird, I pushed past Peter and pulled open the screen door to the backyard. Peter gave a cry of alarm, but I ignored it, running now, needing to prove that the crazy ideas running through my head weren’t true.

I grabbed the tarp covering the pool and pulled hard. It came off slowly at first, then all at once.

His body was bloated in the water, his skin white and melted. The shaggy hair streamed outwards, away from his head, and his pale blue eyes looked directly into mine, wide and unblinking.

This wasn’t real. It couldn’t be real. I turned to Peter, who was standing by the back door. His face was blank. I wanted to scream and rage and scream even more. “What happened?”

“It was an accident,” said Peter. I desperately searched his face for some kind of sign that there really had been an accident, covered up in a panic. Make me believe you, I wanted to say. I want to believe.

“Sam and I were business partners,” Peter continued. “Universities are scams. You know they are! Why shouldn’t I get my cut? Sam and I would find the right parents, and then Sam said we’d let their kid in, if they’d pay a fee.”

“And what happened?” I said, gesturing towards Sam’s body.

“We were supposed to be splitting things fifty-fifty,” said Peter, and his voice was hurt. “He was taking more, a lot more. When I found out, he told me there was nothing I could do about it. It turned out … there was.”

“Sam would always make fun of me for having plans,” said Peter. “He was a reckless guy. When I yelled at him about talking to you, he said I had to learn to be spontaneous. See a girl, say hello. Live a little.”

“You didn’t answer my question,” I said.

Peter and I stood there for a moment. His face was almost as pale as Sam’s.

I imagined myself turning and running, scrambling up a fence. I could practically feel the way the wood would bite into my hand, the frigid air inside the police station.

“You think he was a good guy?” said Peter. “He told jokes about you. Jokes I can’t even repeat. Men are such losers, and none of them really see your value … but I do.”

I swallowed, closing my eyes. It was four minutes to the police station, three if I ran. It would be so easy.

But I never could resist giving my brother what he wanted.

As I dissolved the body, I rested my hand on Sam’s. I couldn’t give him much, but at least he finally got to be touched by me. That’s all a man like that really wants.

If you’ve enjoyed Something Terrible Has Happened, you can visit our free digital archive of flash fiction here. Additionally, premium short fiction published by Mystery Tribune on a quarterly basis is available digitally here.