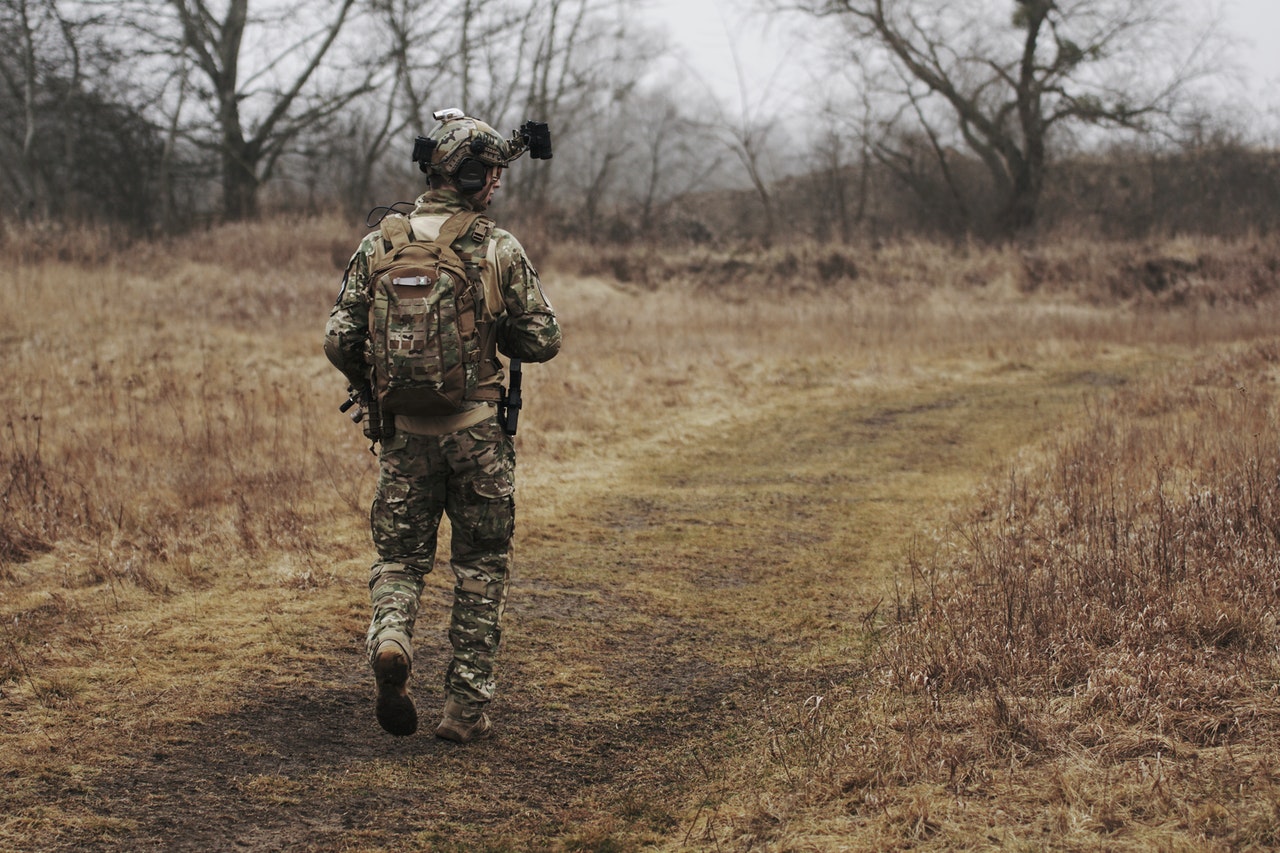 Sara Spock, author of Staff Sergeant Shithead, is a writer and researcher at Penn State University. She has previously published short stories, essays, and poetry to Kalliope Literary Magazine, The Watershed Journal, Stories of Strength, and various other anthologies. Apart from writing, Sara is an anthropological researcher at Penn State University, with a focus diversity, equity, and inclusion in market research.

I was twelve the first time it happened, the fear palpable as I took in my surroundings. I glanced down to see one of my mother’s fancy wine glasses in my hand and the cold-wet stickiness of the morning dew causing sand to cling to my bare feet. Always so thirsty, the dryness of my mouth felt cottony while I stood under those spring stars.

The low-hanging live oak draped with Spanish moss cast shadows that played off the sliver of moon in the clear Florida sky and my heart raced at waking up anywhere but my bed. I heard a shout and looked to the house to see my father running toward my position beside the canal. His thin pajamas whipped away as he sprinted to intercept my sleeping mission, waving an arm to wake me. How many times had my parents warned me about walking the dog near the alligator-infested canal? I quickly backed away and looked to him for answers.

“Stress makes it worse,” he said, warmth filling his eyes and struggling to catch his breath. “Test tomorrow?”

My father wrapped his arms around me as we walked back inside, moonlight dancing through the swaying palm trees. I sat at the kitchen bar gulping water out of the wine glass while he warmed up some milk. My house felt small and the world wide as I struggled to understand what happened, how my sleeping body could betray me.

“This is how Grammy helped me,” he said, trading the wine glass for a mug of milk. “Is it math? It was always math for me. The army helped. Exhaustion helped.”

I remember his eyes searching mine, his babbling brook of words spilled over me, inviting me into his calm, but I don’t remember the test. Or how I got down to the canal that night, and any night after.

Stress made it worse, yet here I was. In a high pressure situation, passing all the checks and balances to once again find myself sleepwalking in the sand with a drink in my hand. I blinked. Staff Sergeant Shithead. No one called me that now, but I certainly still acted like it. Many moons ago, the guys at basic took bets on where I’d end up in camp, trading credits at the exchange for the winning guess. The mess hall. With the birds. Next to the meat wagons.

Stress made it worse, yet here I was. In a high pressure situation, passing all the checks and balances to once again find myself sleepwalking in the sand with a drink in my hand.

In my first deployment, my empty mug took me to the doors of Arfijan’s coffee shops more times than I could remember. And the sandy dunes that surrounded base. I would forever see the face of the man lying dead at my bare feet on those hills, but I’d never see how I got there or how he died. I remember how easily the sand shifted to cover the body, but his open eyes haunted my sleep long enough that I didn’t walk through the night for more than a year. My next two deployments were marked by ranking up, lighting fast decision making, footprints in the sand, forming a killer team that supported me instead of turning rat fuck. They knew the repercussions for the crime of desertion. So did I.

Before I left the States, I decided that my fourth combat deployment would be my last. Command mapped out a plan, a mid level intelligence position making use of the half a dozen languages I’d learned over the years. My years with the Army were supposed to stretch to decades behind a desk, in the field, wandering the world. I didn’t see it ending like this. I never saw it ending. I blinked again, acknowledging the heaviness of the coffee mug in my hand in an attempt to wake up. Always walking with a drink, an empty drink and a dry mouth.

The man with the knock-off Levi’s and very real gun did not blink. I let my eyes drift, without moving my head, around the otherwise empty room. A sturdy camp stove, a few Russian canvas sacks, and a delicately woven rug in hues of rich reds and mustard yellow, stood out against the bleak tent. Night was still black through the small slit in the roof, though I had no clue how many klicks it would take to get back to camp. How had I gotten this far without getting shot? I knew how I’d get back: Kill the hostile; take the gun; track my own steps in the same way I’d tracked combatants; hope the guard hadn’t changed; slip back to my post; turn myself in at daylight.

The empty mug in my hand, Shep’s only memento from home, made a poor weapon, but I didn’t need it. Pictures of his wife and kids, their dog, decorated the mug with the word “Daddy” scrawled in fake kid’s lettering. Shep loved that cheesy mug, the last vestige of his dying marriage. Dana pulled a Dear John on his second trip to the sandbox and took the kids back to New Jersey. Her parents hired an expensive lawyer and threatened to keep him away from the kids if he didn’t pay up. Shep cried himself to sleep and saved me from walking for a few months. When he waved the mug at the kids on their last video chat, it reminded me how thankful I was to not have anyone waiting for me, fucking my best friend and spending my money while I roasted in the sand. But Private Han eased his pain these days, bunking up with him when she could. They kept my secrets. I kept theirs.

He aimed the gun at my chest, the heft of the barrel spanning the distance between my life and his. His life, just as real as Shep’s, but without the mug to show for it. An embroidered hat rested on his head of thick black hair, a head I’d happily remove if it meant survival. Someone made that hat just for that head. I didn’t know whose side he was on, but it didn’t matter with the man on the dunes. It didn’t now. We locked eyes, as if he had read my thoughts and wanted to remind me, “I’m here. I’m alive. I have the gun.” Surely the gun spoke more than we could. The gun.

Despite his military background, my father never kept a gun. I first held one at basic, where we were drilled repeatedly on the mechanics, the function, the lethal nature of the equipment. Each piece fit together in an intricate puzzle to form a killing machine. I broke away from his gaze and chanced a glance at the AK in his roughhewn hands. The black of the gun stood in stark contrast to the neutral backdrop of the sand colored tent. Unlike other Russian issued weapons I’d seen during my time on the ground, this one appeared in good order, clean and ready to kill. Me.

I still hadn’t made a conscious movement, biding my time until I had to move. But now he did, slowly backing away, shuffling over the rug toward the door to raise an alarm, no doubt. My training told me I should be in the driver’s seat. I needed a shift.

“Wait,” I called out, more a question than a request.

He paused. I knew I could kill this guy, but I hoped I didn’t have to. Outside was an unknown, but a sleepwalking shithead had strolled in to this place unharmed. If I could lock him down or tie him up, I could make it back out without the kill. I wanted to raise my arms in a gesture of submission, but one glance at his trembling trigger finger told me to stay still. Instead of fatigues, he wore loose fitting clothes with a vest and scarf. This was not a hardened combatant, but a man caught off guard by a sleepwalking Joe. In our silence, the bleat of a goat cut the night, sounding like a baby cry to an untrained ear. My options were running out, but my mind played through them just the same.

He hesitated before continuing his shuffle backwards toward the tent flap. Ten feet to go. His eyes shifted across my body, taking in my fatigues, sandy feet, and empty holster. His face broke into a grin, revealing yellowed teeth that looked more menacing than a smile had any right to be. I stood, frozen in the ridiculous pose I’d struck in my sleep, one arm limp at my side, the other holding the mug, my thirst palpable.

I grinned back, because in his shuffle, in that moment of self-discovery and memory of my first sleepwalk, I realized something. He wasn’t actually grinning and he didn’t care about my empty holster or bare feet. Because this time, my feet weren’t sticky with early morning dew, but dry from walking through hot sand. Beneath my left foot, something cold and hard that was missing from his AK. The magazine.

I widened my grin and lunged.