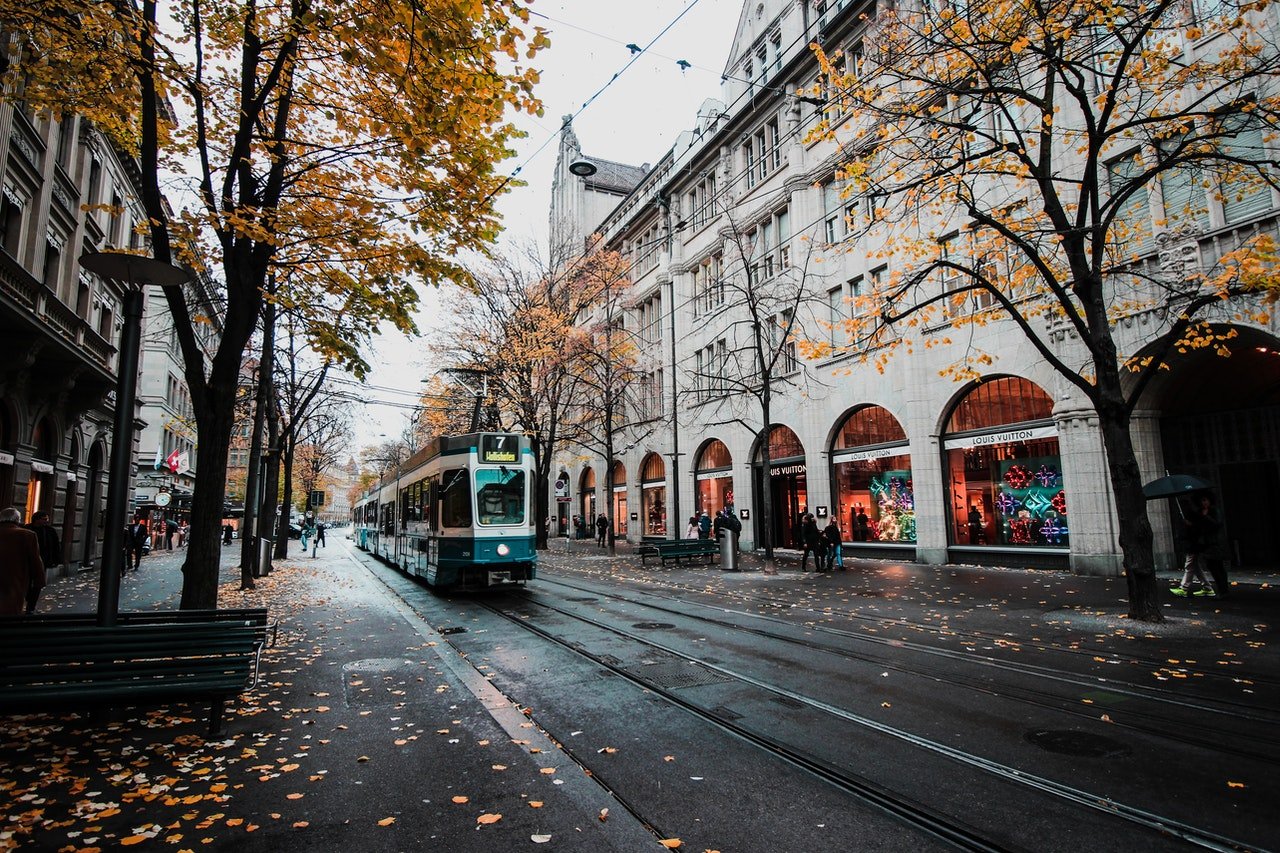 B. W. Carter, author of The Day, has published short fiction in Flash Fiction Magazine, Tales to Terrify, and The Drabble, among others. Mystery Tribune has previously published Reciprocity, a vigilante flash fiction piece by B. W. Carter.

A day in the city, this city. Your city.

Pump and jar and hiss of brakes. Centrifugal heave and slosh of those seated. Ahead, an intersection looms in the vast, bug-spattered windshield.

Flat gush of air. The door folds back with a yank and thump of the release. A few of the passengers look up from their phones. The driver doesn’t so much as glance; she just stares ahead. Maybe thinking of the young blond who sometimes gets on at the next stop, peering through the haze of her cheroot. A newspaper rattles over low-volume hip-hop; a rustling amid muted profanity-laced beats.

Accompanied, suddenly, by two thumps on the bus’s steps.

Then the shoe. An unremarkable black high-top appears upon the lip of the aisle by the driver. Scoots and scouts the aisle like the questing head of a mouse from its hole. Or a serpent hunting mice, its body a length of black jean, bent at the knee.

Then head and shoulders and backpack follow the knee up from the street.

Jim’s taking Hagar to a movie, again. Their second.

Only today — today Jim will invite Hagar to go for babka afterward.

Last time, they left the same theater he’s heading to now. That retro-themed one by Peretz Square. He’s on his way to meet her there now. Last time, he escorted her straight home. He knows her sofa is green, that there may be a blue — Gray? Is “slate” blue? — wall just past the entryway. But he’d managed only that glimpse of her apartment’s interior before the door closed and he departed, alas, with only the memory of a hug and her hair’s lilac scent to gauge his success by. He imagines it clean inside, and neat. Just like his own.

Imagines her shy smile, floral scent pooling in the hollow of her throat.

Perhaps you’ve imagined just this scenario, just that smile. Just that kind of rendezvous. We all have, surely.

Black high-tops move black jeans toward the bus’s middle. The young man inside them is very polite. He speaks softly, his eyes demure.

When he gains his position, he remains standing. Does not pull his hands from the pockets of his hoodie to grasp the anchor-strap depending from the ceiling. Perhaps he has a superb sense of balance.

There’s a heavy sheen of perspiration on his slight features, but nobody notices this because the young man keeps his gaze downcast in the cowl of his hoodie. Unobtrusive, much like wallflowers everywhere. Perhaps respectful, a manner rare in this city these days. Rare in your city, too, unfortunately. But nonetheless it’s just the sort of attitude you want to encounter on such a fair and friendly day.

He will look up in two blocks.

Jim’s so excited. Tapping his toes to an imaginary beat. Lost in Hagar’s smile, Hagar’s lips. So lost he doesn’t notice the passenger move over to stand at his shoulder. Is there a passenger there? Jim couldn’t care less. He’s stuck in the lilac dream of Hagar. Absorbed in her memory’s soft voice, which drowns out even the loud abrupt declaration at his shoulder.

At that moment, Jim’s smiling. Yes, and Hagar too.

Or she will be, because it’s today, oh yes; today’s the day.

Jim’s happy, so very happy, because he knows what her answer will be. It couldn’t possibly be otherwise. He won’t even think such a thing. Not here, not now, on such a fabulous, wondrous, gloriously beautif—

Wendy’s been down on his luck for months now, but he has never wandered this far into the respectable heart of the city before. Maybe from shame, rather than envy. He used to be one of these people, after all. Back when he was Mr. Wendelsonner, in the long-gone days of corporate respectability. Before the horses at the track and the horse in the track marks. Never cleaned his plate. Never tipped. He’d never even have noticed someone like him, before.

Another kind of day altogether.

Now Wendy pauses at the mouth of the alleyway, squints in the brilliance. Doesn’t bother to clean his chin of the grease from the wrapper he’s been licking.

He blinks tears from the light after the alley’s gloom.

People trot past him, deftly avoiding interaction. Wendy doesn’t blame them. Tries not to blame them.

Maybe he’ll meet one of them later, on some future, better-dressed day.

Maybe in this very alley.

You never know what the day will bring, Wendy thinks. Luck’s got no favorites, his bookie had liked to say.

Traffic’s heavy, but he hears the bus. Brakes shrill as it makes a stop at the kiosk on the corner. He’s turning away, though, back toward the dim reek of his current woes.

So he doesn’t see.

He only hears the explosion. The percussion and the heat of the blast knock him into the wall, where he hits his head and sinks dazed to the filthy ground.

Where he turns, in some confusion, to see what remains of the bus, and the intersection, and the few screaming, bleeding sidewalk survivors.

Halfway across the city, Hagar waits. For over an hour, she waits, and Jim does not call. He does not answer her calls. After a while she walks home, crying.

There she will eat a microwave dinner. Maybe she will watch the news. Alone.

But probably Hagar will go to bed early.

She just wants this day to be over.

If you’ve enjoyed Lord of The Day, you can visit our free digital archive of flash fiction here. Additionally, premium short fiction published by Mystery Tribune on a quarterly basis is available digitally here.