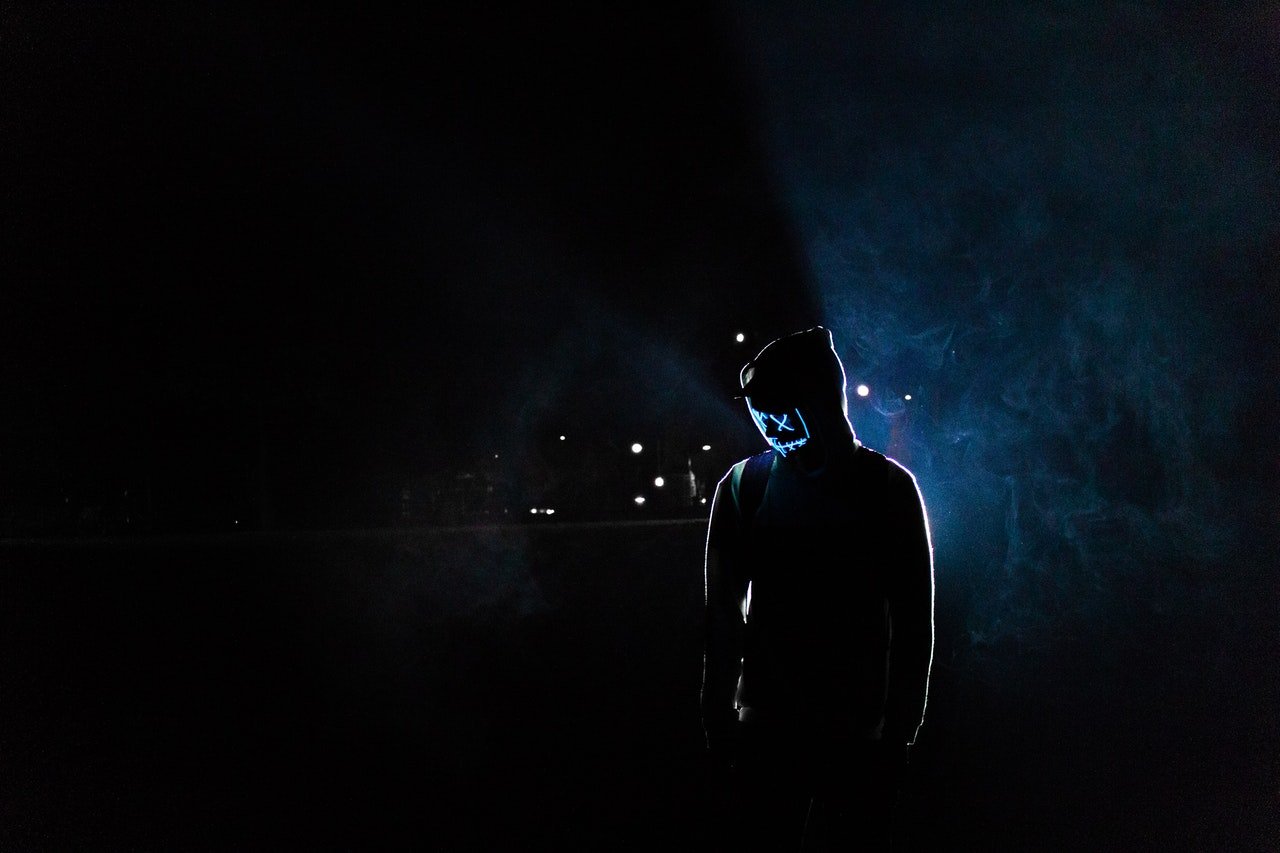 Robert Pope, author of The Masked Man, has published a novel, Jack’s Universe, as well as stories in journals, including The Kenyon Review, Alaska Quarterly Review, and Fiction International.

I’m embarrassed to say how I got the mask I wear when I’m awake. I broke into this nice Tudor on the West Side, did my thing with the Lord and Lady of the manor then explored and found an entire room filled with dress-up clothes. A couple free-standing wardrobes and a metal rack of costumes—not everyday stuff.

I turned on the faux Tiffany at a table dripping with cheap costume jewelry. I didn’t know what I found but had a look. Funny part of it, I found them naked in a television room, him sprawled on a couch, her on the floor beside in a little dog bed. Hilarious!

I said, “I hope I’m not interrupting anything.”

They looked back at me with significant surprise but said nothing on account of the .38 and the black gloves. The woman groaned, an attractive blonde with blue eyes. On the television, actors in evening clothes danced around each other. Fire in the fireplace, wine glasses on a low table.

Wagged the pistol, urging them to continue in the same vein. “Give a show, I’ll be on my way. Won’t take anything, the way I planned.” The guy was in good shape but well on his way into male pattern baldness. I plopped in a big chair, helping myself to wine and waving the pistol to encourage them.

They started slow but couldn’t get to the next level. How could I keep my promise? Ended with two in his back—two birds, two stones. Whole scene lost its charm. I wandered the house for something else to distract me.

I got this urge earlier, in the middle of watching the football game I waited for all week. Got impatient, agitated, my mind racing with this crazy stuff gets in there. Never lets me go until something happens.

By which I mean, go out and find something like this Tudor. Watching the couple didn’t do it. I’m impatient and keep searching, how I found the costumes. Kept me busy a while, trying on what fit: priest outfit, collar shows the white at the front.

Checked myself in a full-length mirror—not bad. Could have gone through the mall and caught a few hello fathers. Thought I might try next day then saw a mask hung on the mirror frame, Mardi Gras style, black.

One thing cracked me up—it rose to little horns at either side, a good effect with the priest outfit. Strange to say, when I looked in the mirror, I got a little disgusted with myself, for playing such a childish game.

I just popped a couple in the TV room, here I was giggling. They had a nice set-up, liked each other well enough to watch old movies in the nude, and this room, whatever it was. How many married couples do this kind of stuff? Digging on each other.

Took off the priest thing, nothing on but the mask, and had a good feeling—get what I’m saying? I’m a guy doesn’t sit on my butt. I get involved. At that moment, I didn’t have to do anything to fill the hole in my gut. Happy to be me, just as I was.

When I took off the mask, I got this hellish itch at the back of my throat I couldn’t scratch. All I could do was gag. Nothing could satisfy, but if I didn’t try, I’d lose it.

Couldn’t think what to do to make it go away, so I put on the mask. Guess what: no itch. Took it off, put it back on, itch and no itch. Got dressed, went for a look at them on the couch, one on the other like they fell asleep, except two red holes in his back.

Walked outside, down the block with the mask on. Found my car, tossed gun and gloves in, slid behind the wheel. Checked the rear-view. I’ve got dark hair, black—the horns blended. I hardly saw them.

Got home, popped a beer in front of the television to watch the rerun of the game, cheering for the Browns best season in years. Felt hope aiming at the Super Bowl. What a gas they could be there at the end.

Went to bed, took off the mask, next morning woke irritated at the world. Slipped it on and felt fine, wore it to work. The company had this contract with the city, stripping Market Street one stretch at a time, repaving for winter. I work hard, always have, so no one paid attention when I showed in the mask.

I’m big enough to keep them quiet, whatever they might say in front of me. Who cares what they say behind my back? Keep my head down, do my job, why the guys who run the show like me. I set this example. Now that I’m not antsy all the time, I’m focused. Give me a water bottle, let me at it.

Few guys got to calling me the masked man, that’s all right. Before, I would have run their heads into a street sign. I’m a changed man.

Most surprising, I’ve been seeing a woman met on the job three months now, a record. Broad-shouldered blonde likes the way I swing my ax. Lately, she’s after me about the mask. I take it off at night, on the bedside, but next morning, on it goes.

“Honey,” she says, “why don’t you lose the mask and go to work like everyone else?”

I tell her, “Babe, I’m not like everyone else.”

If you’ve enjoyed The Masked Man, you can visit our free digital archive of flash fiction here. Additionally, premium short fiction published by Mystery Tribune on a quarterly basis is available digitally here.