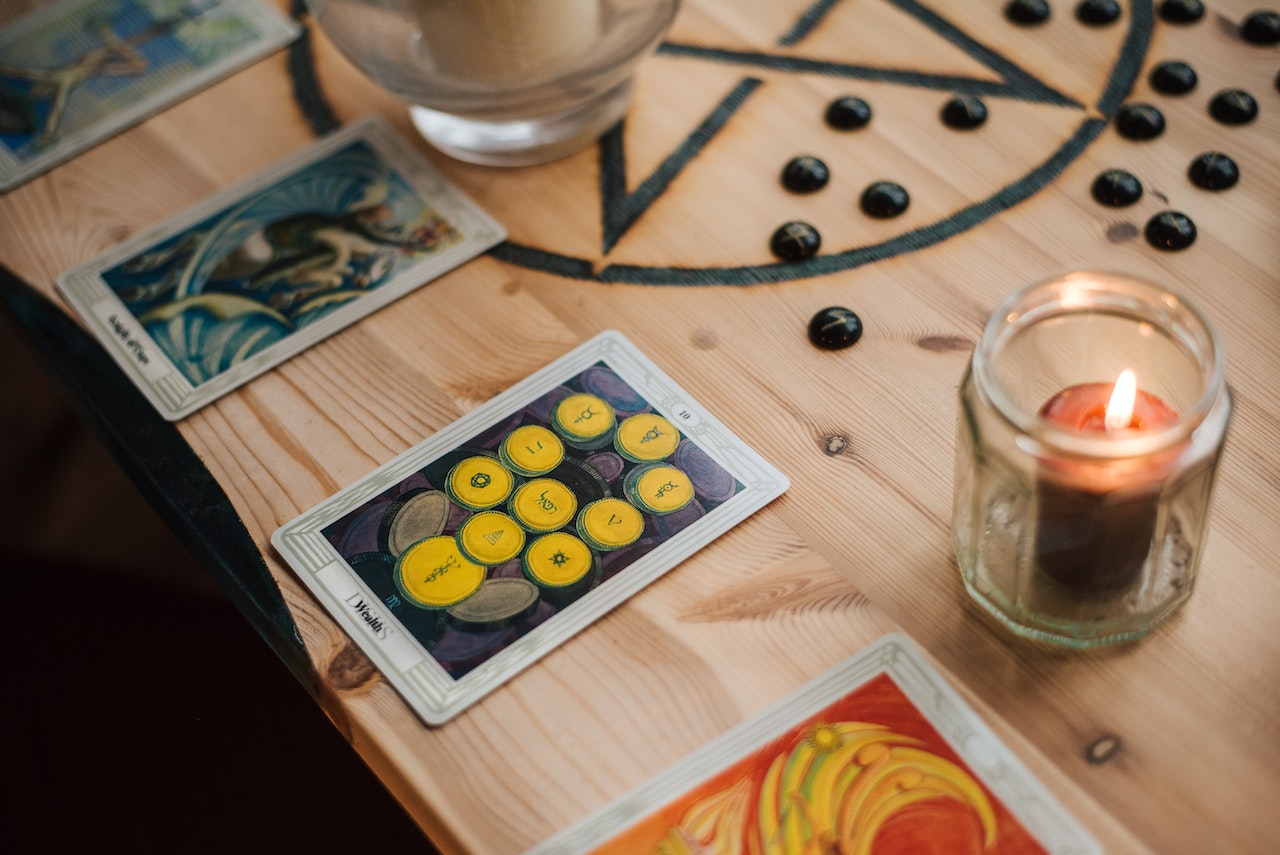 Albert Katz, author of “Tarot Card Reading”, has published short fiction in Allegory, the /tEmZ/ Review, Otherwise Engaged, Spaceports & Spidersilk, and Kansas City Voices among others. His poems have appeared in a diverse range of literary magazines.

Mollie Magharity came from a long line of strong, independent and fearless women, each of whom had succeeded in a man’s world, though, admittedly, a few in her family’s distant past were burnt at the stake for witchery. They had the “sight”, as did Mollie. It was not, however, until her 50th birthday that she had an epiphany: Her role in life was to use her skill in reading the Cards to bring peace to people uncertain of their future, or unhappy in their current lives.

She plied her trade with such success that she started attracting people from near and far. Most of those who came to her approached with common anxieties: Money, Job, Intimacy, problems, with children and in-laws, or with health. These she handled with her usual expertise, kindness and respect, helping many a sad person to happiness.

And then there was Edward Peabody.

She plied her trade with such success that she started attracting people from near and far.

Edward Peabody was a non-descript man in his mid-50s. He was thin but not gaunt, with receding brown hair. He was the type of man who would disappear into a crowd with no one even noticing he had passed them by. In their sessions together, he was polite and talked softly, sometimes barely audibly, but his manner had an inchoate mercurial undercoat. He just came to his readings enveloped in a diffuse sense of doom, cocooned within a dark impenetrable cloud.  Time after time, Mollie’s cards showed a lonely disturbed person without hinting what road he should follow. He was her sole failure. She knew he left her readings with as deep angst as when he had come. But he kept coming.

Mollie suspected Edward was battling an illness of the soul the nature of which was only hinted in the card.  In some months both the cards and his visible agitation indicated a man with pent up energy facing the abyss of a violent upheaval. Other months he was calm, and peaceful, Regardless, in the cards she laid out for him, there was always an undercurrent, a hint, of a man in need of closure. He was, she recognized, a deeply lonely and sad man, with an inner darkness that raised the hairs on her neck. She started dreaming of him and those dark dreams frightened her.

Usually Edward came to her house for his readings but on that Tuesday he phoned in anguish asking her to come to his house in the country because he was too disturbed to drive. He begged. He required her presence to make it through the day. Although frightened, Mollie knew her responsibility to her craft and to her clients. She made the sign of the cross and, after steeling herself for the worst, took the two extra tools she felt she might need that evening.

She drove deep into the countryside to give her reading, reaching the address he had given in late afternoon. She parked at his cottage, a place that, like him, was non-descript and isolated. There were nice prints on the wall, with a carefully tended plush flowerbed out front, and yet, under it all there was a sense that the walls never echoed with the laugh of children or that the kitchen ever was graced by a woman.

Mollie laid out the cards as the sun went down. Edward cycled from being visibly agitated to seemingly calm and peaceful within spans of minutes.  Mollie intuited that the hollowness in his soul she has seen hinted at in the past was calling out for help. And that, she understood, was her mission this day: To help Edward Peabody finally find peace.

She started laying out the cards on his kitchen table while Edward walked around, like a lion in a cage, only looking at the cards briefly as she read them out. The reading brought forth images even worse than Mollie thought possible, with each card turned over indicating a dark doomed future. What do the card tell you Mollie? Usually Mollie would not have stated what she had seen only as glimpses in previous readings, but today she knew both their fates were in the balance.  Taking a deep breadth and mentally crossing herself, she answered resolutely. The cards she said revealed a very spiritually ill person, someone with negative energy and deep, disturbed thoughts. She begged him to get medical help.

Edward just smiled at her, thin lips pushed together. He said nothing and just walked to the stove, and asked Mollie if she wanted tea. His words were spoken softly as usual but this time she heard a menacing tone she had not heard in any of their earlier meetings.  She shook her head, no tea, and stood to go. You have not given me a proper reading he told her, still talking softly and menacing. You only gave me your overall impressions, Mollie. She reached for her jacket feeling that if she did not leave now, she might never get away. Not even looking at her, Edward rose and locked the door. He then walked to the counter and picking up a meat cleaver. I WANT A READING.

Mollie had feared that one day this scene might act out. She quietly mouthed a prayer, and sat back down, her purse in her lap.  She reached into her purse and took out her rosaries, laying them on the table next to the cards. Edward laughed. You have added to your box of tricks I see, he said, deathly soft again. Now tell me truthfully what you see. Mollie started mouthing a prayer, doing as he bid. Oh God no. Oh God no, ran in a loop through her head. But she knew well that she came from strong stock, from women who had faced adversity and stuck to their principles.

She made a vow that however this day ended, she will do her duty to her trade and to Edward. She read out the meaning of each card, clearly and loudly:  They revealed the soul of a monster, a man with a need to kill to calm his agitation. They revealed that he has lured many a person to this house, had butchered them and buried their bodies near by. Edward’s smile broadened as each card was read. When Mollie finished, he laughed joyfully.  I knew eventually you would give me a true reading Mollie. Did the cards show you where the bodies are buried? She, shook her head, no, dejectedly and picked up the rosaries, started a Hail Mary. Edward ignored her. I’ll give you a hint, Mollie.  Did you notice how lush my flowerbed is? Mollie kept on mouthing Hail Mary, Mother of God.

Mollie stopped mouthing, asked, her voice thin, whether Edward would unlock the door and let her leave now that the reading was done. But he only laughed more loudly. Not yet, he said. I want you to lie out the cards for yourself, and see what your future holds.  She pleaded, no Edward please. But he was adamant. DO IT!

Thinking again of the strong women in her past, Mollie took a deep breadth. Words sprung to mind. God help me change what I can change and accept with grace that which I cannot. Resolutely, she laid out the cards, one by one, saying a few general words about each as she placed them on the table. The message was all dark, all bleak, with death settling like a shroud upon her. When all the cards were placed on the table, she looked at them a long time and started to shiver. A tear rolled down her cheek. Edward laughed. He was buoyant; no longer morose. Mollie could sense that Edward was getting a special enjoyment for her torment, finding this day so much more satisfying then those other times he had sated his agitation by blood.

Speaking slowly he asked her, what fate had the cards shown she faced. She hesitated because the future was too awful. Edward relished these end moment, even better this time than with those of his earlier victims. TELL ME WHAT DO YOU SEE?

Crying and with hands trembling, Mollie reached into her purse. TELL ME WHAT DO YOU SEE? Mollie ignored him, repeating once again “Holy Mary, Mother of God, pray for us sinners now and at the hour of our death.”

ENOUGH OF THAT ROT MOLLIE, TELL ME WHAT YOUR FUTURE HOLDS! Still trembling, Mollie pulled out from her purse the second tool she had intuited she might need for this reading. The last words Edward Peabody heard were Mollie telling him that, on this day, the cards had shown that she, Mollie Magharity would become a murderess.

She shot him several times, just to make sure he was dead, before phoning the police to report what she had done, telling them to bring shovels for the flower garden.