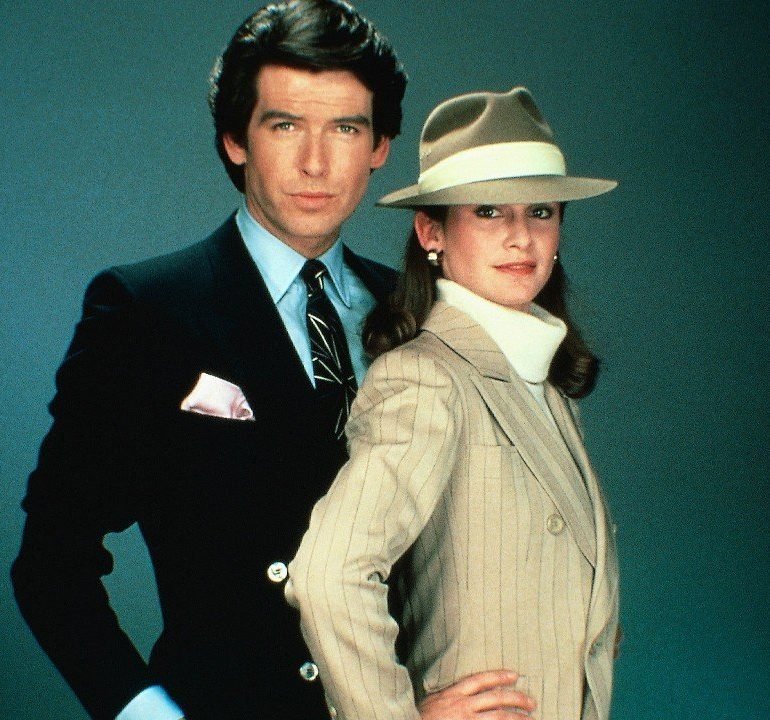 The Ultimate Guide To Remington Steele and Laura Holt

Remington Steele is one of those classic crime shows which is best known for having launched the career of Pierce Brosnan. Besides that, many consider the series an influential part of television history in its own right. Before taking part in Remington Steele, Pierce Brosnan was an obscure Irish actor. When the series ended in 1987,  he was well-known with a debonair and slightly devilish image. And that image made him the perfect, obvious, and only choice to become the next James Bond.

Originally written as a mix of comedy and dram, Steele intended to be a comic-relief figurehead while the focus was on Laura. But Brosnan’s charisma and the chemistry between him and Zimbalist took over the plots. One of the show’s interesting aspects was that it always used the word “Steele” as part of every episode title.

At first these were clever and/or amusing puns often related to the plot — “Steele Crazy After All These Years”, “You’re Steele The One For Me” — but as time went on the writers ran out of good ‘steel/steal/still’ puns, and took to just inserting the word into titles, seemingly at random (“Small Town Steele”). In one episode they managed to use both characters names (“Red Holt Steele”).

The opening plot for this iconic TV show was a curious one. Laura Holt, a licensed private detective played by Stephanie Zimbalist, opens a detective agency under her own name. But she finds potential clients refuse to hire a woman, no matter how qualified. To solve the problem, Laura invents a fictitious male superior she names Remington Steele.

Through a series of events in the first episode, “License to Steele,” Pierce Brosnan’s character, a former thief and con man (whose real name even he proves not to know, and is never revealed), assumes the identity of Remington Steele. Behind the scenes, a power struggle ensues between Laura and Steele as to who is really in charge. In parallel, the two carry on a casual romantic relationship.

Long-time TV director Robert Butler came up with the initial idea for the Remington Steele in 1969. He believed that a new show featuring a solo female private investigator would differentiate it from other concepts and would appeal to viewers. Butler pitched the idea to Grant Tinker before he was head of MTM. Tinker, however, felt the series was ahead of its time.

In January 1980, following the success of several sitcoms featuring working women, Butler and Tinker, now head of MTM, revived the concept. MTM Vice President of Programming Stu Erwin felt Butler’s concept was only “half a show”. He suggested that Butler work with veteran writer Michael Gleason to expand the premise.

Imagining Holt’s fictional boss, Gleason proposed to Butler, “Wouldn’t it be great if he showed up and made her crazy?” In 1981, Gleason, Butler, Erwin and Tinker pitched the series to NBC. The network initially rejected ths proposal as executives failed to “get” the premise. Shortly thereafter, Tinker left MTM to become chairman of NBC. Soon after, he ordered a pilot.

Pilot and Start of the Series

Stephanie Zimbalist, an established TV actress, received an invitation to play the role of Laura Holt. At first she turned the series down. But apparently she had a late-night change of heart. Pierce Brosnan (best known then for his role in The Manions of America) auditioned for the role of Remington Steele, but was initially refused by NBC executives who were concerned that Brosnan was a relative unknown in America. MTM’s Stu Erwin stood firm in a face to face meeting with NBC executive Brandon Tartikoff and Tartikoff relented.

Originally, NBC asked for a pilot that imagined the series six months into its run, with the characters already working together in the detective agency. This pilot was produced in February and March 1982, and was eventually aired with revisions as “Tempered Steele.”

NBC had some concerns about audience confusion over this episode. But ultimately the network agreed to schedule the series for the 1982-83 season. NBC also asked for a premise pilot which told the story of how Laura Holt met the man who became Remington Steele. This second pilot, “License to Steele,” became the first episode aired in the series.

The first season included two recurring characters: Murphy Michaels, a detective, and rival for Laura’s affections, played by James Read; and Bernice Foxe, the secretary-receptionist, played by Janet DeMay. Both Murphy and Bernice knew that Remington Steele was a fraud. Episodes in the first season set in motion the slow evolution of the romantic relationship between Laura and “Mr. Steele” (she never called him “Remington” in the course of the show’s run) while revealing elements of the characters’s backstory. The first season established the pattern where each episode made direct reference to an old movie. One example includes The Maltese Falcon and The Thomas Crown Affair, reproduced in 1999, with Pierce Brosnan in the lead role of Thomas Crown.

Additionally, writer Joel Steiger won an Edgar Award from the Mystery Writers of America for his script for the first-season episode “In The Steele of the Night.” Remington Steele also received strong critical reviews in the first season, noting its intelligence and stylish sophistication.

At the end of season one, James Read made Michael Gleason aware that he was unhappy with the direction of his character. Gleason released him from the series and also let Janet DeMay go. He was thinking that one character can accommodate the role of the detective/investigator and secretary characters. Gleason originally wrote the replacement character, Mildred Krebs, as an attractive 35-year-old woman who was a rival for Steele’s affections. Doris Roberts, an established character actress who had recently won an Emmy for a guest role on St. Elsewhere, asked to read for the part. Although Roberts was not the right age for the character Gleason originally conceived, she won him over with her audition. Gleason then changed the character of Mildred Krebs to reflect the casting.

The second season continued the slow evolution of the relationship between Laura and Steele, as he became a more competent detective. Key episodes include the two-hour season premiere, “Steele Away With Me”, filmed on location in Mexico. “Red Holt Steele”, was also a fan favorite dramatic episode which included the destruction of Laura’s house in an explosion. Finally, in “Love Among the Steele” the agency acquires a 1936 Auburn Speedster. The creators used it symbolically in several subsequent episodes.

The third season also included an episode, “Steele in the Chips”, co-written by Stephanie Zimbalist and writing partner Robin Bernheim. The final episode of the season ended with a cliffhanger as Laura and Steele seemed to be going their separate ways. Michael Gleason explained to the Los Angeles Times, “We want to pull the relationship apart and bring it back together again with a little bit different attitude.”

Season four was the final full season of the series. In the two-part season opener, “Steele Searching”, filmed on location in London, Mildred Krebs learned of Steele’s secret. This changed the dynamics of the trio. Other key episodes, including “Forged Steele”, “Steele in the Spotlight” and “Sensitive Steele”, continued the slow evolution of the romantic relationship between the main characters. Facing a possible cancellation by NBC (whose fortunes had now changed to become the number one network) Gleason contrived a phony marriage between the characters in the final episode of season four, “Bonds of Steele”, as an attempt to garner additional interest and provoke NBC to pick up the series for a fifth season.

Gleason originally wanted the characters to have a real marriage at the end of season four and had plans for how to change the series in season five to accommodate the change, but both Brosnan and Zimbalist rejected the idea. Following that decision, Gleason pitched another concept for season five to NBC in May 1986. He introduced a character named “Eddie” as a rival for Laura’s affections.

Temporary cancellation of the series

The NBC network cancelled the show at the end of the 1985–86 television season, although it still had a 28% share of the audience in its time slot. According to Michael Gleason, Brandon Tartikoff’s decision to give an early pick-up to the Stephen J. Cannell series Hunter left no room on the NBC schedule for Remington Steele. Two months after the cancellation, NBC executive Warren Littlefield reversed the decision. In a nutshell, he was responding to an outpouring of support from fans and a sharp upswing in the show’s ratings during the summer of 1986.

The tendency to let go of the show was welcomed by both the network but also Brosnan. In an interview with People magazine in 1986, the actor noted:

“It was, too much like a job…I had just had enough. I’d had enough after two years, but I’d signed a seven-year contract.”

The cancellation and reversal affected film roles for Brosnan and Zimbalist. They both received firm offers to do films in the interim. Albert R. “Cubby” Broccoli offered Brosnan the part of James Bond for the film The Living Daylights. Following NBC’s reversal, Broccoli stated he did not want Bond to be identified with a current TV series. So he instead gave the role to Timothy Dalton. Brosnan finally became 007 in 1995, making his debut in the film Goldeneye. Zimbalist had accepted the role of Officer Anne Lewis in the science-fiction movie RoboCop. So, she had to pull out of that production, to be replaced by Nancy Allen.

NBC reversed the cancellation, but did not slot a full twenty-two episode season into their schedule. The final abbreviated season consisted of six hours of made-for-TV films broadcast in early 1987, including installments filmed on location in Mexico, London, and Ireland. Jack Scalia joined the cast as a rival for Laura’s affections. Final episode included the circumstances surrounding Steele’s birth as well as the identity of Steele’s father. The final scene of the series implied that Steele and Laura were about to consummate their relationship.

Rumors of Tension between Brosnan and Zimbalist

Although part of the show’s appeal was the sexual tension between the main characters, in real life the production was dogged for years by rumors that its two leads did not get along. Brosnan and Zimbalist have admitted some level of personal conflict in press interviews. They mentioned that this was due to the stress of long working hours. However, in recent years, Brosnan and Zimbalist have spoken fondly of one another.

In an interview for the DVD release of Season 1, Brosnan says they got along and trusted one another professionally. Brosnan also praises Zimbalist’s acting, saying that he would work with her again on the right project. Zimbalist also complimented Brosnan in a 2011 interview. In a conversation with the New Jersey Star-Ledger, she mentioned “Pierce Brosnan is a very sweet man.”

In 2005, Pierce Brosnan expressed interest in developing a Remington Steele feature film through his production company, Irish Dream Time. But he later stated on his web site that it is unlikely to be produced. However, 8 years later, in October 2013 NBC announced plans to reboot the series as a half hour comedy. NBC’s deal with 20th Century Fox has screenwriters and a director attached, but no cast is yet attached.

Note: If you are interested in reading other Mystery Tribune Ultimate Guides, please look at our overview of the work by Mickey Spillane, Raymond Chandler, Arnaldur Indridason, Karin Fossum, Jorgen Brekke or Jussi Adler-Olsen.