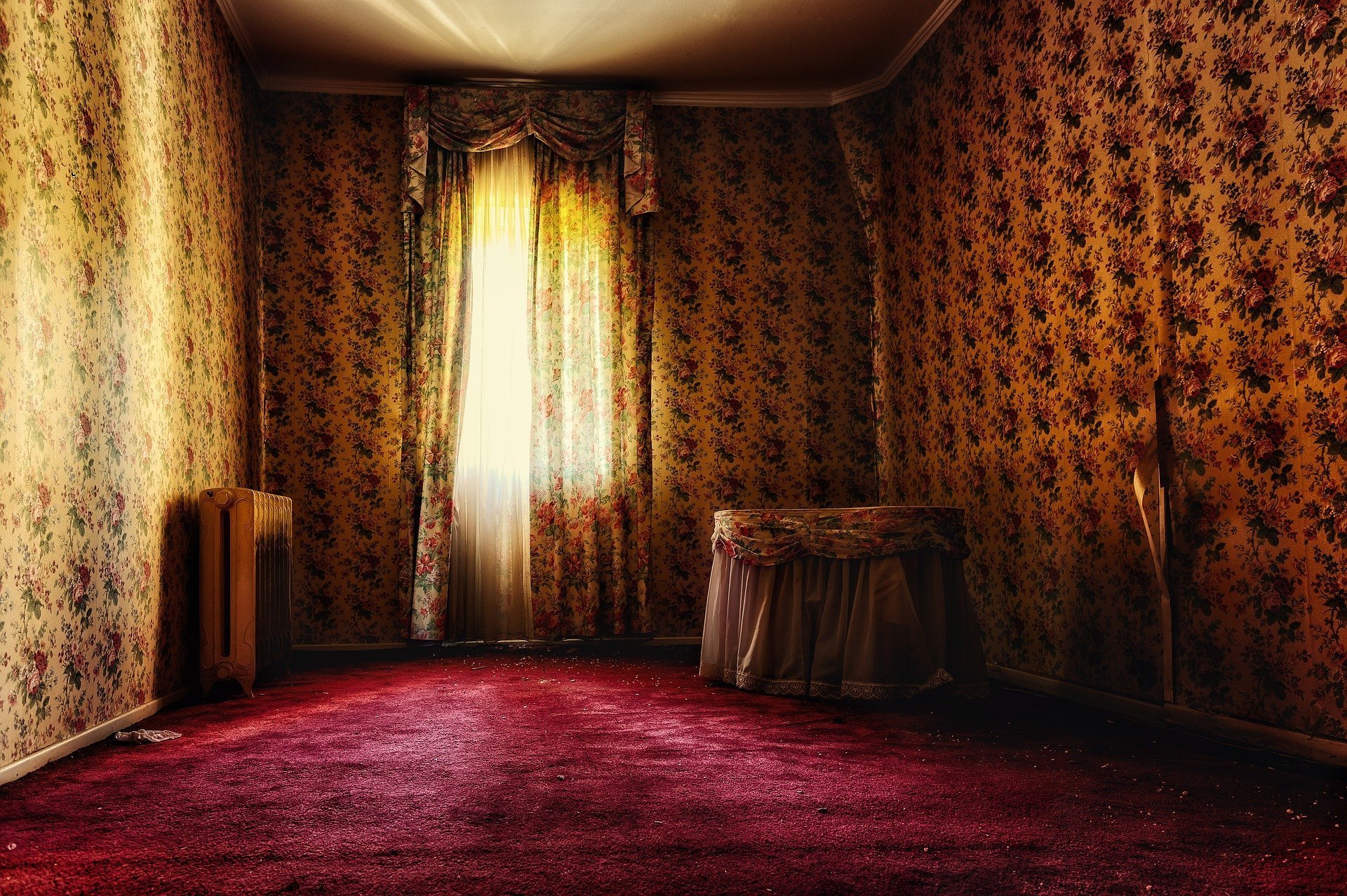 In The Urn by Eureka Vaughn, Tommy spends lots of time at home, drinking and watching TV while his wife is way for work business. But he soon finds out he may not be alone.

12:04 A.M. Tommy woke up on the sofa. He knew he shouldn’t be drinking so much with his heart troubles but with his wife gone so often for work, the booze was the only thing that kept him sane. The only thing that kept him company. He glanced at the shelf across the room. Nothing on the shelf was out of place. No pictures knocked down. No pottery lying on the floor next to the shelf. But most importantly, the urn was still there, in the same way it had been when he fell asleep.

He’d never liked that damn thing. In it, was Claire’s beloved Great-Aunt, Rebecca. She was the daughter of pioneers who’d come to Wyoming by covered wagon in the 1800’s. She was a nice lady, but clearly not very fond of him, even though her sister, Claire’s Grandmother, loved him. Could it have been his poor background? No one ever said so, but everyone knew the truth. “Why the fuck do we have this in our house?” He had zero issue asking this right after the funeral. “Because, she loved me very much and I loved her. Plus, she supported me in my Journalism Job, Tommy, even more than my Grandma.” Even thinking of the conversation in the middle of the night, he could feel his eyes roll.

He’d never liked that damn thing. In it, was Claire’s beloved Great-Aunt, Rebecca. She was the daughter of pioneers who’d come to Wyoming by covered wagon in the 1800’s.

At 6:00 A.M., Claire came home. She’d told him that she would take an Uber home instead of having him pick her up from the airport. “Did you move Aunt Rebecca?” She asked. “No,” he said. There was a white rim around the top of the dark blue urn, that ended in the center where a gold cross was painted in.

Aunt Rebecca was a very religious woman…who enjoyed mocking her fellow parishioners in private as often as she could. “I thought you moved her to clean. The cross is turned towards the back now.” “No.” He would dust around the urn – never touched it. If she were ever home for more than two days, she’d know there’s a ton of dust underneath, he thought to himself. Then he began to wonder what was going on, since the urn had moved again.

He always thought it would be so perfect that Aunt Rebecca would come to bother him in the afterlife. He’d married her precious Claire and ruined their well-heeled bloodline. No doubt she wouldn’t rest easy.

Two days later, on Thursday, he dropped her off at the airport. Hug, drive home, eat Chinese takeout, drink bourbon and pass out on their dark leather sofa. Wake up. Repeat. His years as a college athlete made a difference, because his eating and boozing never showed on his waistline. Claire called as soon as she got to her hotel room. “How are you?” She said. “Fine. Just watching TV.” “And drinking whiskey again?” “Yeah. As always.” “Jesus, Tommy. It’s gonna kill you someday!” “I hope not,” he said. “How’s Aunt Rebecca?” He sighed. “She’s fine, dear. Still next to the candles where you put her.” Claire immediately let her know that she’d never moved the urn there; it was next to the flowers when she left home that morning. She hadn’t even touched the urn. He felt a chill pass through him.

Later that night, he upped his bourbon intake. Instead of two fingers in a glass, he tried 4. Anything to help him sleep. Anything to help him deal with whatever was happening on that dark wood shelf across from his sofa. He passed out around 9:00 P.M. He woke up in the middle of the night again. 2:00 A.M. he looked at the urn. No movement. A small victory.

He could at least sleep a little more peacefully without all this weird shit going on now. He closed his eyes again. He opened his eyes and checked his watch. 2:45 A.M. He saw a shadow in the living room. Too drunk and too sleepy to speak, he paid it no mind. He closed his eyes again. Eventually, he opened his eyes. 3:01 A.M. He didn’t even have time to scream when he saw Aunt Rebecca standing right over him, face pale with death and dark rings around her eyes. Back to settle a score. Back to make ensure her peaceful eternal slumber.

If you’ve enjoyed The Urn by Eureka Vaughn, you can visit our free digital archive of flash fiction here. Additionally, premium short fiction published by Mystery Tribune on a quarterly basis is available digitally here.