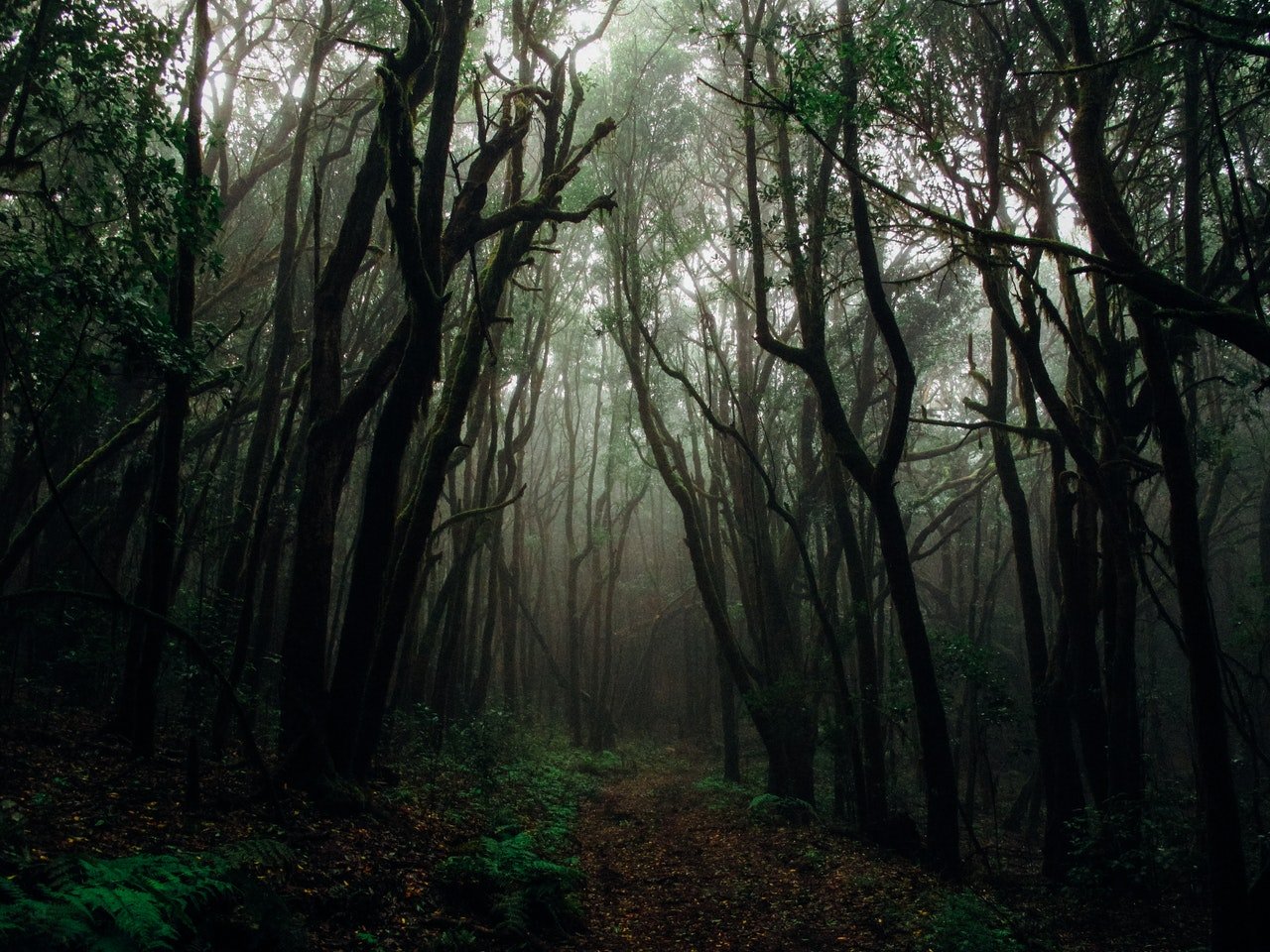 The Walk in the Forest: A Strange Flash Story By Alzo David-West

Alzo David-West, author of The Walk in the Forest, is a writer, poet, and academic. His creative writing appears in Antimatter, Balloons Literary Journal, Barzakh, Cha, Cultural Logic, Eastlit, Foliate Oak Literary Magazine, and Grief Diaries among others.

My two-year-old daughter and I went for a walk on a footpath in the dense, vast forest that borders the wide field down the hill from our village cottage. The month was mid-October, and even though the leaves on the trees were still rich and green, the weather was cold, so we wore our thick clothes, hats, and gloves.

We strode casually into the middle of the field, where we saw a mass of little brown birds, and my daughter, small as she was, ran thrillingly toward them, happily crying out, “Birds! Birds! Birds!” The entire flock picked up noisily and fluttered off in an arch, and I observed my daughter, who asked why the birds went away.

“They got scared,” I said. “They did not know you wanted to play.”

We saw seeds in the grass, which I explained that the birds had been eating, and we continued across the field, to the edge of the forest, walking alongside a high wall of shrubs and plant growth. We entered an opening to the footpath, which was scattered over with twigs, leaves, acorns, and stones. We passed carefully under the thin broken trunk of a termite-eaten tree leaning against another tree.

We saw seeds in the grass, which I explained that the birds had been eating, and we continued across the field…

My little daughter was fascinated by the forest world, and she walked slowly ahead of me, inspecting the twigs and the stones and gathering acorns and other plant things in her little hands. I saw a tiny, soft, green caterpillar hanging by a thread from a leaf, and I called to my daughter. I pointed, and she got scared, holding me tightly, so I carried her and mentioned that everything was okay. Picking up the caterpillar by the thread, I reassured her there was no harm: “He is a friend.” But she was still scared, so I placed the insect larval creature back onto its leaf. My daughter repeated, “Good-bye, caterpillar,” after me.

I put my daughter down, and we continued up the path, which twisted, rose, fell, and twisted again, and I warned gently that we should be careful not to fall off the right-hand side, down into the wilds, where we could die. We had walked a while, and I was getting tired and warm. I saw steps that had been carved into a knoll, with an old shrine at the top, and I asked my daughter if she wanted to rest up there. She agreed, and we ascended.

The shrine was dusty, as if no one had come for many years. There was a broken broom and a rusted coin. We sat. I started singing, and my daughter, overjoyed, said, “Again! Again!” each time I finished. Afterward, we sat quietly, listening to the wind in the trees and looking at the sky and the clouds between the branches and the leaves. I asked my daughter if she wanted to walk again. We got up and began to slowly descend the steps. My daughter followed cautiously behind me.

As we approached the middle of the steps, I heard a rustling sound in the forest, and I looked around quickly. A massive wild boar with razored tusks was rummaging hungrily below, and a shock of fear came over me. I never expected large animals in the forest. I assumed they had been hunted out. Were we in its territory? My daughter, still descending, did not see the boar, which passed by. My fear increased with the thought that, had we been on the path, the beast would have mauled us and eaten me and my child. I nervously wondered what we should do: go back up to the shrine or continue up the footpath, away from the boar. The weather got colder. I had no food or drink. I did not know how far we had walked.

Down the steps, we continued up the footpath. I held my daughter’s hand. There were more twists and turns, and then the path split into two directions. I had no idea which one to take, so I hazarded a guess. I moved forward, when my daughter started crying, pleading for me to carry her. I did so for our safety and continued onward. She fell asleep on my left shoulder, and the weight of her body doubled.

The walk turned into a horrible toil. There was no end in sight amid the trees, which were getting thicker around both sides of the footpath. The light was dimming, and panic was creeping on me. I am a town man, relocated to the countryside for political reeducation, and I only have basic People’s Army skills. Did we go the wrong way? Would we disappear in the forest? Were we lost forever? The silent questions assailed me as my child slept soundly. I wished my wife, who succumbed to tuberculosis last year, was with us.

I resolved to suppress my panic for my daughter’s sake and go wherever the path would lead us, and I hoped, I dearly hoped, that neither the boar nor a pack of boars would come looking for us. I strained against my fatigue and fear, holding my daughter, stopping to rest, and walking again.

The dimming light turned pitch black, and I now feared a plummet into the unseen wilds about us. As I carried my daughter, I searched blindly for a branch I could improvise as a walking stick, but there was nothing long enough, so I kept as close as I could to the left-hand side of the footpath. When I found myself straying, I would kneel down, feel the path with my hands, and shift my daughter from one shoulder to another shoulder, somehow enduring the exhaustion and the pain.

I am not sure how long we were in the forest, but suddenly, to my immense relief, the path took us to a moonlit clearing, which I recognized and knew was four kilometers away from our village cottage. I noticed snow. My daughter continued to sleep after I brought us home. I put her on our floor mattress, and under the seeping moonlight, she lay still and beautifully as two-year-olds do. I sat beside her, my face in my hands.

The next morning, I awoke on the floor, under sunlight that was pouring through our cottage window. There was a painful gnawing in my stomach, and my body was aching rigidly and hurting all over. My daughter was still sleeping. I covered my eyes from the strong warm light, and I remembered from our table clock that we had gone to the forest at 1:00 p.m., after we had a meal, but I never checked the time when we returned in the night. I realized I still had my thick coat on, and I could feel dirt and mud on my face and hands, so I got up and went to the bathroom to rinse off with bucket water. I looked at myself in the mirror, and I did not understand what I saw.

In the mirror, I was stooped and emaciated; my face and hands were scarred and calloused; and my lips were chapped and broken.

There was a frantic knocking on my front door, and I went to see who it was. Outside were my neighbors and their children, crowding, huddling, gasping, demanding what had happened, asking if I and my daughter had escaped from human traffickers, imploring if we were okay. I was confused. When I tried to say we took a wrong turn in the forest the previous afternoon, my voice was hoarse and unclear.

The village doctor came forward, held my left arm, and advised me to sit down. He felt my forehead for my temperature, and he ordered three women to go inside the cottage to boil water and to look for my child. The women shouted that they found her, alive but extremely weak, gaunt, and malnourished.

“Our neighbor Ri Songil is not well, everyone,” the doctor said. “He and his daughter have been missing for seventy-one days. We will get to the root of their disappearance, but now,” he urged, “they need rest and care.”